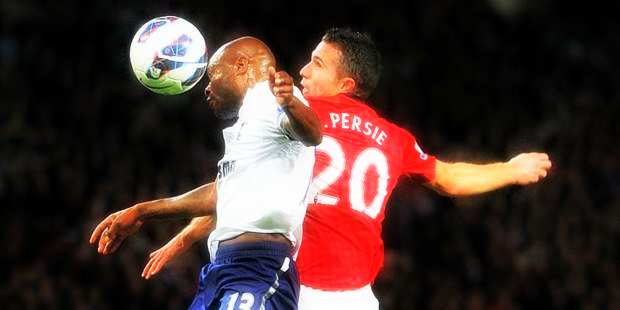 Manchester United will be looking to maintain the lead at the top with a victory against Tottenham at the White Hart Lane on Sunday.

Tottenham, who already registered a heroic victory at Old Trafford in September earlier this season, will be looking to complete a rare double over the league leaders.

Andre Villas-Boas has been carrying on the good work left by Harry Redknapp as Spurs occupy the fourth spot in the league and could topple third placed Chelsea who hold a slender lead of just two points only.

Spurs head in to this fixture on the back of a frustrating stalemate draw at QPR a week ago, ending their three-game winning streak. They are at 2.90 to win the match with bet365.

Midfielder Scott Parker will likely to start in place of Brazilian Sandro who suffered a horrendous knee injury and has been ruled out for the rest of the season.

England international Jermain Defoe will be expected to continue his goal scoring duties with Emmanuel Adebayor returned to his home town for the African Cup of Nations. Though the 30-year-old has scored 10 goals in the league so far, he has not scored since Boxing Day and found the net only once in last seven matches.

Younes Kaboul is a long term absentee with a knee problem while experienced defender William Gallas is sidelined with a calf injury.

Manchester United will be buoyed by their back to back victories against Liverpool and West Ham (FA Cup) and will be looking to keep piling the pressure (seven point gap) on second placed Manchester City.

Robin van Persie has been in tremendous form this season and has scored nine goals in his last nine league games. Interestingly, the Red Devils have always won all the league games when the Dutchman has been on target this season. He is priced at 1.90 to score anytime with bet365.

Manchester United will miss Darren Fletcher for the reminder of the season after undergoing a surgery to cure his chronic bowel problems.

Skipper Nemanja Vidic could partner Rio Ferdinand at the heart of defence as Jonny Evans remains absent through hamstring problems. Ashley Young could also miss the trip after picking up knee injury against Liverpool while Nani many start in his place.

Wayne Rooney made his return against West Ham in the last match and found the net despite missing a penalty for which he received some criticism as well. Sir Alex Ferguson has all the four strikers fit and available so Rooney has to prove his mettle to claim a regular place ahead of Javier Hernandez and Danny Welbeck.

Spurs are currently on a six league match unbeaten run under the Portuguese and have won last seven games out of eight, in all competitions at home. The North Londoners, currently on fourth in the table are six points ahead of Arsenal and only two points behind third placed Chelsea – with 40 points from 22 games.

Manchester United on the other hand have amassed 55 points from 22 games, their highest ever tally at this stage in Premier League history. The stats look more impressive as United won nine out of their last 10 league games with 24 points achieved from losing positions and are at 2.50 to win against Spurs with bet365.

Manchester United have won 76 times in the league as compared to 36 times by their opponent on Sunday. Under the Scotsman, they never lost a league fixture at White Hart Lane since May 2001.

Spurs ended their 23 year’s wait for victory at Old Trafford when they defeated Manchester United 3-2 earlier this season. However, Spurs haven’t made a league double over their rivals since 1989-90.

Both the sides are in good form and will be heading to the match hoping to get all three points. Though United’s defence has improved in recent matches, but the vulnerability still persists, as evident in the second half display against Liverpool.