Manchester City host Liverpool on Thursday aiming to close the gap on Jurgen Klopp’s unbeaten side.

City head into the game seven points behind the Reds and anything less than a victory would be a major blow to their hopes of retaining the title.

Pep Guardiola’s side defeated Liverpool 5-0 in the corresponding fixture last season, but they haven’t beaten them since then.

This season’s first meeting between the two sides ended in a 0-0 draw after Riyad Mahrez missed a late penalty at Anfield.

City are favourites to win this evening’s game, but Liverpool will be eager to retain their unbeaten league record.

City need to win on Thursday to give their title hopes a boost. They look too good to ignore at odds of around Evens to collect three points.

Mohamed Salah has scored 13 Premier League goals this season. Bet on the forward with bet365 to open the scoring on Thursday at 5/1.

The two sides have scored 102 league goals between them this term. Over 3.5 goals in the match is priced at 13/8. 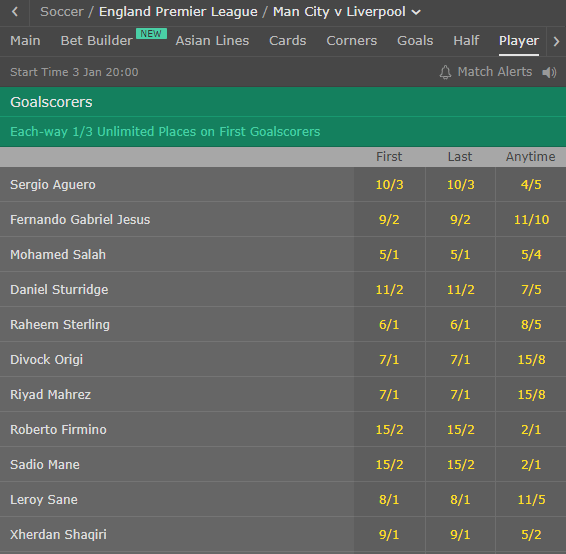 Have an Each-Way First Goalscorer bet on any match with bet365, and be safe in the knowledge that if your player scores at any time during the game bet365 will pay you out!

Each-Way bets are settled on all goalscorers, at 1/3 odds for unlimited places in 90 minutes play.