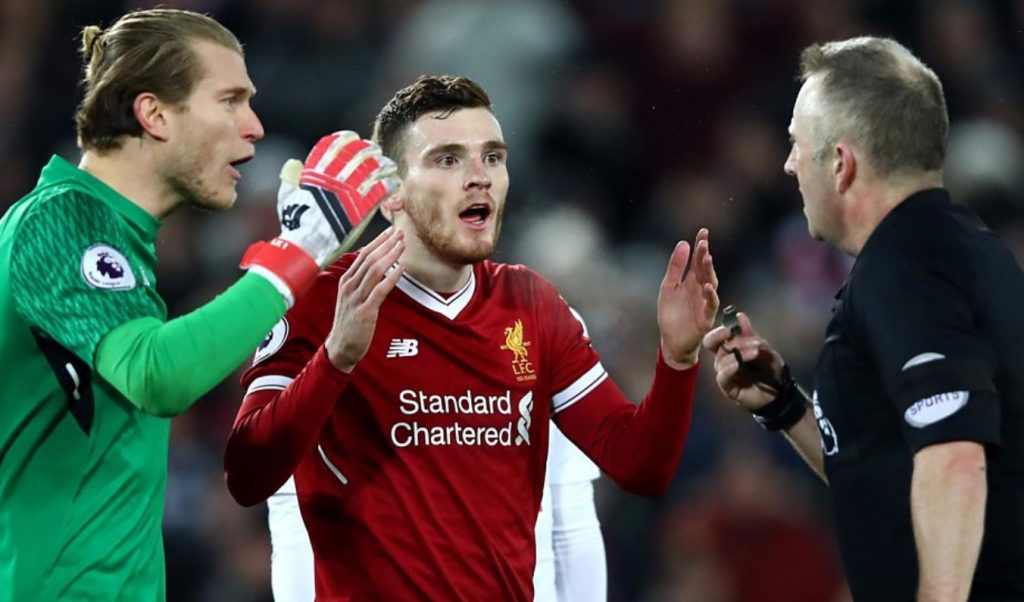 Liverpool and Tottenham shared the points after a pulsating clash at Anfield.

A number of refereeing decisions played a huge part in a thoroughly entertaining Premier League encounter that saw The Reds in the third take on Spurs in fifth.

This season’s star performer Mohamed Salah was at it again early on. Following a scuffed back-pass from Tottenham’s Eric Dier, Salah made no mistake by tucking the ball low past Hugo Lloris. With only two minutes and 50 seconds showing on the clock, Spurs fans would have been fearing the worst.

Despite being the better team in the first half, Liverpool failed to add to their lead but looked satisfied to take a lead into the break.

Tottenham came out looking like a different team after the interval. Chances came begging with Dele Ali wasting a good opportunity after Son Heung-Min had seen his shot parried by Lloris Karius.

With ten minutes left on the clock, the drama started to unfold. Having been the dominant side after the break, Tottenham netted a deserved equalizer. Karius unconvincingly pushed away a Christian Eriksen cross, only to see Victor Wanayama smash the ball home.

At this point, the North-London club looked the more likely to snatch the points. With 84 minutes played, Harry Kane went over as Karius came off his line.

Confusion ensued as the England striker looked clearly offside. However, on closer inspection, it did look as if Liverpool defender Dejan Lovren touched the ball in an attempt to clear it. Referee Jon Moss was certain it was a penalty and pointed to the spot.

Kane looking for his 100th goal struck the ball firmly down the middle, but to his disappointment, Karius had guessed correctly and saved comfortably.

Was that a major turning point? As the seconds ticked by both teams sought a winner. In the first minute of added time, it looked as if The Reds had found one.

That man Salah again! This time he cut inside from the right-hand side before beating two Tottenham defenders. Salah then expertly lifted the ball over a helpless Lloris.

Anfield exploded with atmosphere. Reds boss Jurgen Klopp made his way down the touchline to celebrate with jubilant fans. Not surprising as Liverpool were about to clinch a game that could have a massive say on whether either club will finish in one of the coveted Champions League spots.

Hold on we’re not finished… Still time for more drama. 95 minutes on the clock and Spurs were desperately searching for a last-gasp equalizer.

Erik Lamela tried to collect the ball in the box before being bundled over by £75m man Virgil Van Dijk. It looked sloppy but was it a penalty?

Referee Jon Moss didn’t give it at first. Instead, he consulted with his assistant Eddie Smart, before pointing to the spot as gasps of disbelief rang out around Anfield.

Kane this time fired his chance away and reached his 100th goal milestone. The rest of added time ticks by and finally Moss blew for time on a game that will linger in the minds of both sets of supporters for some time.

It will come as no surprise that Liverpool fans were extremely unhappy with the officials. 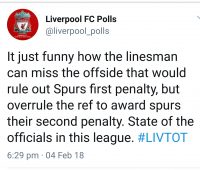 Both managers had their say on the days events. Speaking to BBC Match of The Day, Mauriccio Pochettino was convinced the officials were spot on…

“Both were a penalty and nothing to say, it is not controversial – it is nothing. Sometimes people complain about the referee, but when they are right it is good to tell everyone.”

Not surprisingly, Jurgen Klopp had a slightly different view…

“I don’t understand either of the penalty situations. The first one was offside and the second, I know already what the ref and his assistant will say. There was a touch, a little touch. But Lamela has jumped into him and wanted the touch and to go down”

The frustration shown by those associated with Liverpool is understandable. The decisions on both penalties will be up for debate for some time.

Overall a draw was the correct result on the balance of play. Both teams can be pleased with a point each.