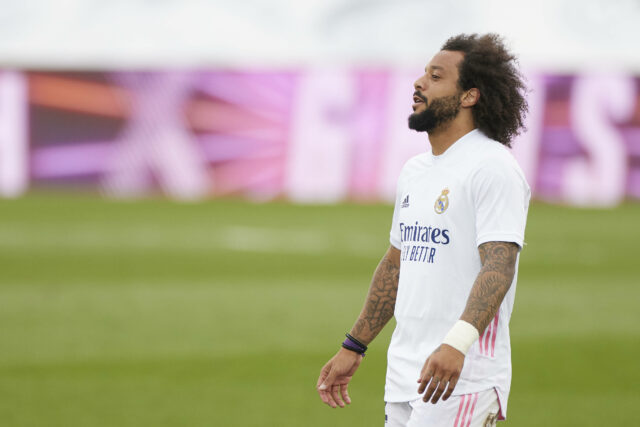 Real Madrid left-back Marcelo wants to stay at the Bernabeu Stadium next season.

According to reports from Defensa Central, the Brazilian wants to continue at Madrid, even after knowing that he won’t be the first-choice under Carlo Ancelotti.

The report claims that Marcelo has had conversations with Ancelotti. The Italian boss has told him that he won’t be a major part of his plans.

Marcelo accepts that Ferland Mendy is in better shape at the moment, and he will be the first-choice left-back next season.

However, Marcelo still wants to continue at the Spanish club. The 33-year-old joined Los Blancos in 2007 and has made over 525 appearances in all competitions.

Move to Everton or Leeds?

Last week, reports emerged that Marcelo could leave Madrid as he is not in Ancelotti’s first-team plans.

The Daily Mirror claimed that his agents are searching for a new club for him and have sounded out both Everton and Leeds United, with the Toffees early favourites to land the Brazilian.

Leeds are looking to sign a left-back this summer, regardless of Gjanni Alioski’s future, and Marcelo could be a short-term option.

Everton could also be looking to sign a new left-back as a back-up option for Lucas Digne. At just £5 million, Marcelo would have been a fantastic option for them.

Marcelo, who has only a year left on his contract, appears reluctant to leave Madrid.