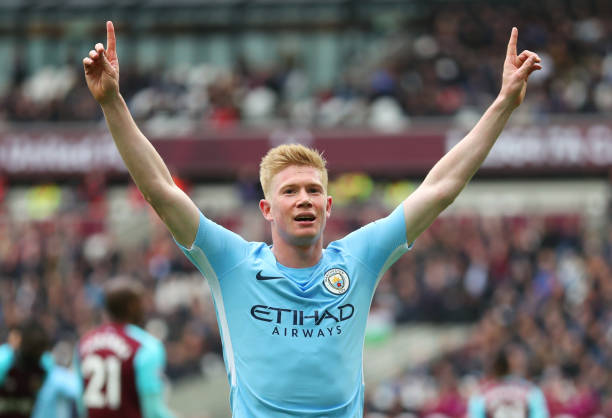 When Manchester City decided to splash out approximately £55 million for Wolfsburg midfielder Kevin De Bruyne, more than a few eyebrows were raised.

However, the Belgian has been nothing short of marvellous at the Etihad, silencing all doubters who labelled him a ‘Chelsea reject’.

This weekend, he further emphasised his brilliance, registering his 100th assist for Man City. The playmaker’s pinpoint outside-of-the-foot cross landed right on the head of John Stones, who duly converted.

While Man City have been exceptional on the domestic stage, they have notoriously struggled in Europe, reaching just one semi-final.

And they owe a lot to Kevin De Bruyne for reaching that semi-final. Having already scored in the 2-2 draw at Les Parc des Princes, the Belgian secured qualification for the next round with a beautiful curling effort at the Etihad.

The Manchester derby is often one of the most enticing fixtures of the Premier League calendar, and this one had extra edge to it. Both sides had won their opening three games of the season, seeing them occupy the top two spots.

It was the blue side of Manchester who were celebrating after week four, thanks to an inspired performance by De Bruyne. The former Werder Bremen loanee netted the opening goal and had a hand in Kelechi Iheanacho’s strike as Man City came away from Old Trafford as 2-1 winners. De Bruyne was subsequently named Man of the Match.

After getting comprehensively beaten at the Camp Nou, the Cityzens needed something special to pick up three points against Barcelona in the return fixture.

And something special was exactly what they got in the 51st minute. De Bruyne stepped up to hit a dipping free kick into the top corner, beyond the grasp of Marc-Andre ter Stegen in goal.

A brace from Ilkay Gundogan further helped City on their way to a memorable home win.

It seems ridiculous to think about now, but Kevin De Bruyne was once deemed not good enough for Chelsea. Oh, how they could do with him now.

On his return to Stamford Bridge, the Belgian got revenge on his former employers in perfect fashion, rifling an unstoppable left-footed shot into the bottom corner. This was the only goal of the game as Man City claimed all three points.

Man City’s centurions were nothing short of exceptional in 2017/18, and De Bruyne was the standout.

In that season, the midfielder made his first appearance in the PFA Team of the Year after finishing the season with eight goals and 16 assists – no player in the Premier League set up more goals.

This helped his side to a first league title since 2014.

In 2018/19, Pep Guardiola’s side went one step further, becoming the first English side in history to win the domestic treble.

The treble was complete on May 18th 2019, when Man City destroyed underdogs Watford with six goals. De Bruyne was at the heart of this display, scoring a brilliant goal and providing assists for Gabriel Jesus and Raheem Sterling.

The playmaker was astonishing once again, scoring 13 goals and assisting 20 – only Thierry Henry has ever assisted as many in a single season. This form earned him the PFA Player of the Year award, becoming the first Man City player to ever scoop the prize.