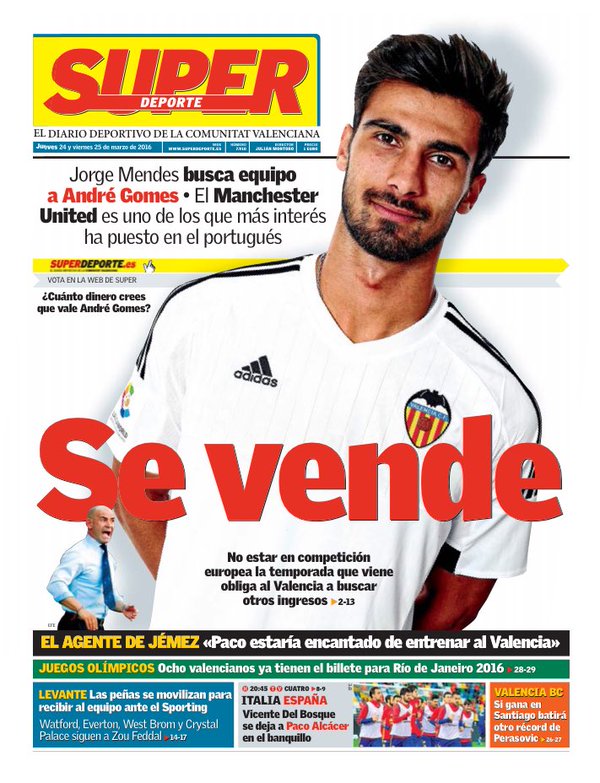 A disastrous 2015/16 season has left Valencia FC into all sorts of troubles. The La Liga giants won’t be participating in Europe next season, which has forced them to reconsider their budget for the upcoming season.

Valencia may have to sell some of their star players in order to raise funds, but the overall transfer budget has been cut down to €100m from €120m. A major setback for them is that they won’t receive enough money from TV revenues, as the club won’t be featuring in the Europa League as well.

André Gomes apparently off. No Europe means no money for Valencia, so they will look for income via a player sale. pic.twitter.com/14xaALJFYQ

One of the players Valencia are looking to sell is Andre Gomes. The 22-year-old highly talented attacking midfielder has been a key player for Los Che for the past two years. He is represented by Jorge Mendes (Gestifute, the company to be precise) who holds a good relationship with Valencia owner Peter Lim. Mendes has promised Lim that he will try to present a good deal for Gomes.

This has led the UK press to believe that Mendes might be thinking of taking Gomes to Manchester United. Mendes holds a good relationship with United, and has been involved with some high profile transfers over the years, including the likes of Cristiano Ronaldo, David de Gea, and Angel di Maria.

Mendes has two primary objectives for next summer: finding buyers for two of his top clients – Andre Gomes and James Rodriguez.

Valencia signed Gomes for around €15m, but the market value of Portuguese now stands at €100m. It is highly unlikely that Manchester United would pay such a ridiculous amount for Gomes, should they at all show willingness to sign him. Mendes will have to lower his asking price and use all his negotiating skills to secure a deal for the young midfielder.

Should Manchester United go for Gomes? Definitely. He is miles ahead than some of the attacking midfielders they have in their squad. His greatest attribute is his impressive technical ability and tactical awareness. His ball control is impeccable, he loves to dribble and can pick the right player at the right time with pin point accurate passes.

The most amazing aspect about his game is his ability to pass and shoot with great accuracy and with each foot. Rarely you find a youngster doing that on a consistent basis. He would be a great asset for any club, and Manchester United should do a smart business by singing him.