Manchester United are guaranteed a fourth place finish but they are involved in one of the biggest matches on the final day as Hull City need to beat the record English champions if they’re to have a chance of playing Premier League football again next season.

Three points for Steve Bruce’s side would keep them up if Newcastle lose at home to West Ham.

It will be interesting to see how Louis van Gaal plays this one – he’s spent the season trying to work out his best team so will he give youngsters and fringe players a start with nothing much to play for.

A thigh injury has kept Curtis Davies out for the past few weeks – the sole defender unavailable for Steve Bruce this weekend.

Jake Livermore has been suspended indefinitely for failing a drugs test. He joins Mohamed Diamé (knee) and Gastón Ramírez (hamstring) as midfielders absent for the final game of the 2014-15 season.

Nikica Jelavić has played in the past three matches as he builds up his fitness for a chance to start the most important game of the season for Hull following a lengthy layoff.

David de Gea is a doubt after coming off with a hip injury versus Arsenal last weekend – we could see Víctor Valdés make his first Manchester United start this weekend.

Luke Shaw didn’t feature against Arsenal because of a concussion picked up the weekend before but we expect him to be fit if called upon at Hull. Rafael is done for the season on the opposite side of defence.

Michael Carrick has been a loss for Manchester United in midfield in recent weeks. 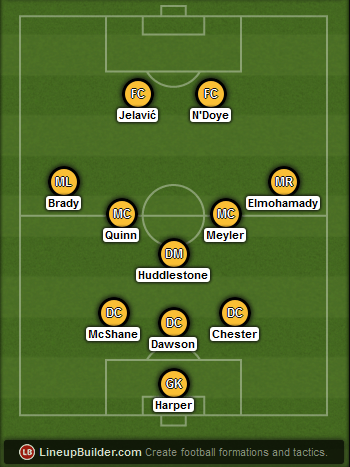 Steve Bruce plays a 3-5-2 formation and we don’t see him changing that for the visit of Manchester United. Dame N’Doye and Nikica Jelavić will be the players most-likely to score, whilst they’ll be looking for crosses coming in from the wings. A couple of central midfielders missing is a blow to Bruce with a team that has lost three on the bounce. 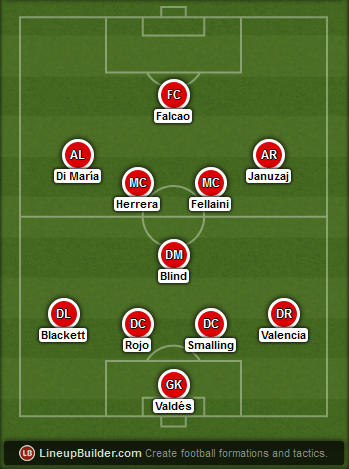 We think Louis van Gaal will make a few changes for his team for the final day of the season with fourth place already guaranteed. Víctor Valdés should be in goal whilst youngster Tyler Blackett could get another start. It would make sense playing Marcos Rojo at centre-back with next season in mind. In midfield, Ángel Di María could do with another start. And up front, Wayne Rooney is injured and Robin van Persie out-of-favour so Radamel Falcao should be playing his final game.

Dame N’Doye vs Chris Smalling
Chris Smalling has been hit and miss in recent weeks whilst Dame N’Doye has looked decent since his recent move. With Nikica Jelavić still getting back to full match fitness we think it is the Senegalese striker who needs to lead the line up front.

Ahmed Elmohamady vs Tyler Blackett
Hull don’t have too much in the way of playmakers in their midfield and a lot of their creativity comes from the wings. Ahmed Elmohamady bombs forward every game and whips in a number of crosses. If he faces the inexperienced Tyler Blackett Hull may look to go out wide from the start to see if the Egyptian has any success.

Ander Herrera vs Tom Huddlestone
Manchester United will be looking to get their Spanish playmaker on the ball and although Ander Herrera will be up against three central midfielders from Hull, he has the quickness and agility to cause problems. Tom Huddlestone isn’t the most mobile, nor the hardest working player defensively so this is one battle the visitors should be looking to take advantage of.

20 – Steve Bruce has won none of his 20 Premier League matches versus Manchester United (D4, L16).

100% – Manchester United have won all seven Premier League meetings between these two.