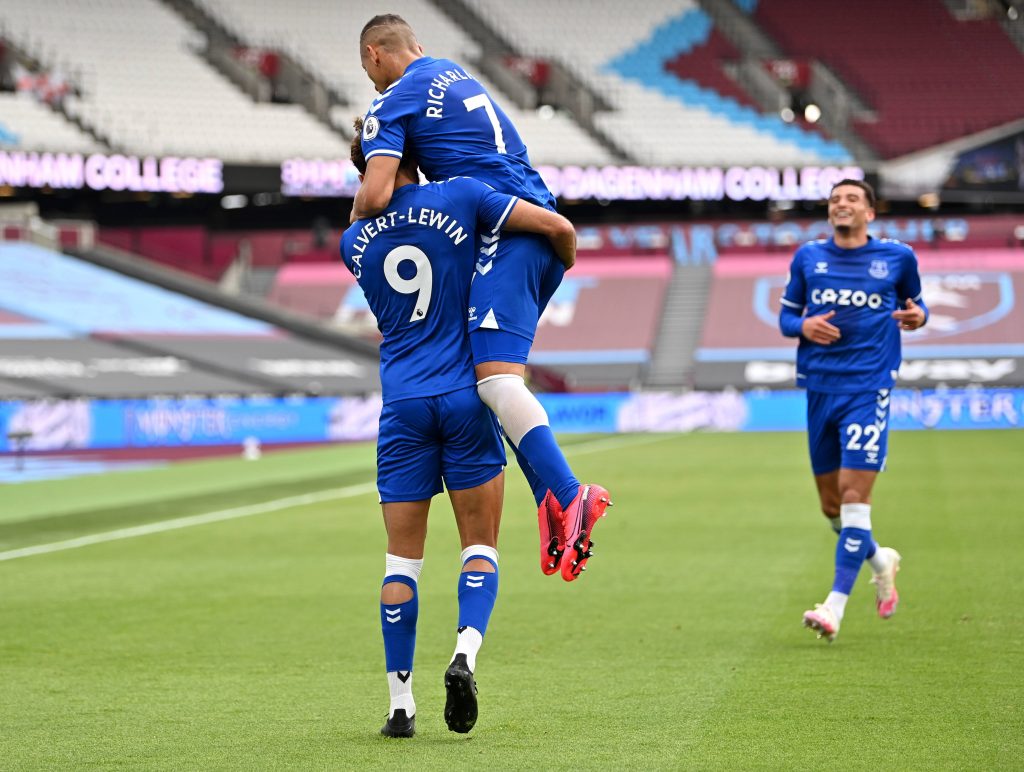 The 2020/21 Premier League season has entered the crunch period as the two sides go head-to-head in the penultimate round of fixtures at Goodison Park on Wednesday.

A shocking 1-0 home loss to basement boys Sheffield United on Sunday inflicted a devastating blow on Everton’s hopes of securing a European finish as they take the field trailing seventh-placed Hammers by three points.

Meanwhile, Wolverhampton’s Premier League wobble continued last weekend as they succumbed to a 2-0 away defeat to Tottenham Hotspur, courtesy of Harry Kane and Pierre-Emile Hojbjerg’s strikes.

Regardless of what happens in the final two matchdays of the season, Wolves are destined for a bottom-half-of-the-table finish, having endured another underwhelming top-flight campaign.

Alex Iwobi and Michael Keane were on the scoresheet as Everton claimed a 2-1 win at Molineux in the reverse fixture in mid-January, with Ruben Neves scoring the consolation goal for Wolverhampton.

The Toffees are now looking to do a league double over Wolves for the first time since the 1975/76 season. Adding to their confidence, Carlo Ancelotti’s men have avoided defeat in eight of their last nine home league matches against this opposition (W5, D3).

Since being held to a goalless draw back in September 1977, Everton have found the back of the net in each of their subsequent 12 home league meetings with Wolverhampton.

Though the sides’ recent performances suggest this could be a tight, low-scoring affair, their recent head-to-head meetings tell a different story.

Seven of their last eight Premier League encounters have featured at least three goals, including the last five.

A lack of firepower up front has seen Everton score one goal or less in 11 of their last 12 Premier League outings. Ahead of the kick-off, the Toffees have drawn a blank in back-to-back league games.

Before last season’s 3-1 loss to a shifting Bournemouth side, Everton had won the final home league match of the season in seven consecutive campaigns.

The Merseyside giants have relished their midweek Premier League fixtures this season, having lost just one of their 12 such contests so far (W6, D5).

Low scoring has been a common theme in Wolverhampton’s away Premier League matches this calendar year as seven of ten away games since the turn of 2021 have featured under 2.5 total goals.

Nuno Espirito Santo’s men have drawn a blank in four of their last nine league trips, scoring precisely once per game in four of the other five.

Unlike Everton, Wolves have been in complete disarray when it comes to their midweek Premier League contests, having failed to win any of the last 11 (D4, L7) since a 1-0 triumph against Liverpool in December 2010.

Dominic Calvert-Lewin has notched up 16 Premier League goals this season. He is four short of becoming the first Everton player since Romelu Lukaku in 2016/17 to score 20+ goals in a single league campaign.

The 24-year-old has yet to score a league goal against Wolverhampton.

Ruben Neves has been responsible for a third of Wolves’ nine away Premier League goals scored this calendar. Despite playing as a deep-lying playmaker, the Portuguese star is his side’s joint-best scorer this season, with five strikes to his name.

Winless in their last five home Premier League games on the trot (D2, L3), Everton have a point to prove against Wolverhampton this midweek.

Ancelotti’s men are desperate to qualify for the Europa League and will have to grind out a result here if they are to take the top-seven race down to the wire.

Wolves have failed to score in both of their previous away Premier League fixtures against the sides outside the drop zone.

By contrast, they have got on the scoresheet in five consecutive top-flight trips to Goodison, netting twice or more in each of the last two.