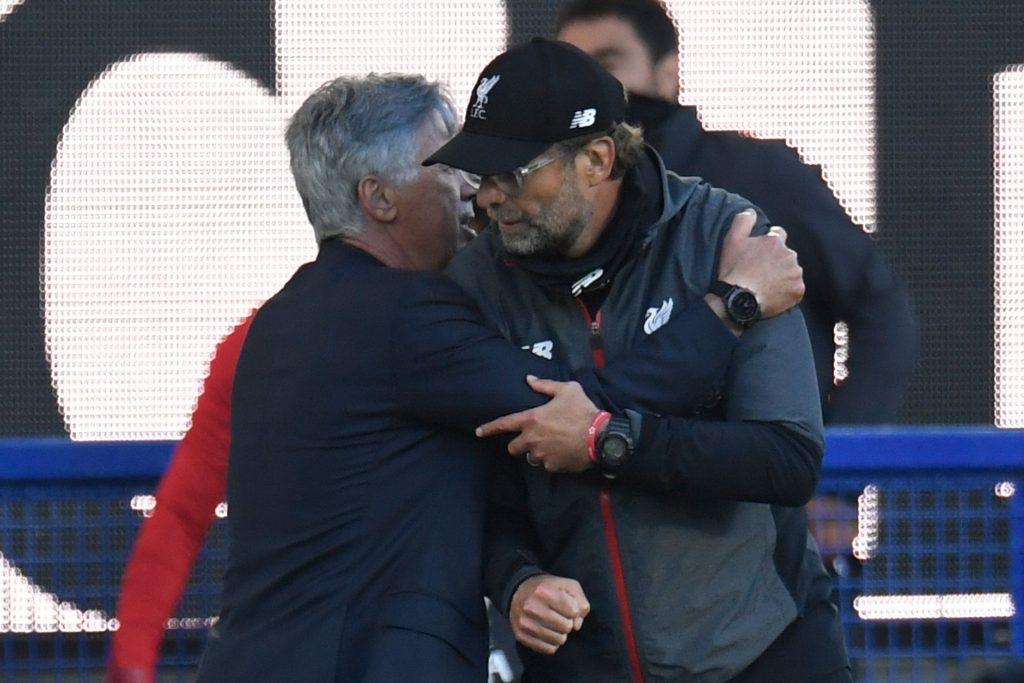 Everton will take on derby rivals Liverpool in the Premier League clash on Saturday lunch-time at Goodison Park.

The Toffees have made a perfect start to their Premier League campaign, winning all of their opening four matches thus far.

It’s been ten years since Everton have defeated Liverpool in the Premier League, but Carlo Ancelotti’s side will be heading into this match with loads of confidence.

Liverpool, the Premier League champions, on the other hand, suffered an embarrassing 7-2 defeat against Aston Villa in their last game.

The Reds are one of the favourites to retain the title, and it will be interesting to see how they respond to the defeat.

Jurgen Klopp’s side will be without goalkeeper Alisson for this game, but Thiago Alcantara and Sadio Mane are back in the squad after self-isolating due to positive coronavirus tests.

Everton, who finished 12th in the Premier League last season, have bolstered the midfield by signing James Rodriguez, Allan and Abdoulaye Doucoure, and the trio has made a huge impact so far.

Here are three key battles that could shape the derby:

Virgil van Dijk is arguably one of the best defenders in the Premier League, but he has been troubled by pacey forwards this season.

Liverpool have looked defensively vulnerable, with the likes of Leeds and Aston Villa troubling their back-line.

The high defensive line strategy is backfiring for the Reds, and Everton could look to exploit that as well.

The likes of Rodriguez, Richarlison and Dominic Calvert-Lewin are in fantastic form this season, with the latter scoring two hat-tricks already in all competitions.

Richarlison is a massive threat from the flanks, while Rodriguez is good at opening up the opposition defence with killer passes.

How to handle Thiago?

The Spaniard only played 45 minutes of Premier League football this season, but he looked head and shoulders above the rest against Chelsea.

He registered the most passes attempted by a player during the game and added a whole new dimension to Liverpool’s midfield unit.

Thiago is like a music composer who dictates the tempo. With him in the side, Liverpool are expected to dominate possession, and that gives them an advantage in the derby.

Everton midfield have looked solid following the arrivals of Allan and Doucoure. They have added steel and dynamism, with the duo operating as a safety belt for the back four.

Carlo Ancelotti will be without Yerry Mina, Jarrod Braithwaite, Jonjoe Kenny and Mason Holgate for this game, which means 22-year-old Ben Godfrey could be thrown into the mix against the Reds.

Seamus Coleman should be fit enough to start the game, but doubts remain over the fitness of Lucas Digne who picked up an injury during the international break.

With so many key players missing in a high-profile game, it will be interesting to see how the Everton defence cope with the Reds trio of Sadio Mane, Mohamed Salah and Roberto Firmino.

Everton are on a roll here, while Liverpool will be looking to bounce back from their ignominious defeat last time out.

It was back in September 1989 when for the last time Everton went to the Merseyside derby being at top of the table.

The stage is nicely set. It’s a shame that Goodison Park will remain without fans for such a momentous occasion.