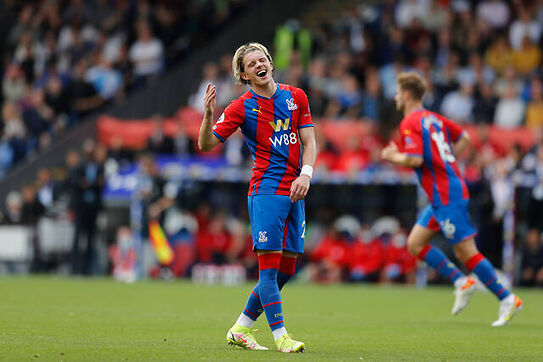 The Eagles won 3-0 against Spurs, with summer signing Odsonne Edouard scoring a brace on his debut. Wilfried Zaha also added another to earn all three points for Patrick Vieira’s side.

After a 0-0 first half, Palace dominated the game when Japhet Tanganga was shown the marching orders for picking up two yellow cards.

One player who particularly impressed was midfielder Conor Gallagher. The 21-year-old,  who joined Palace this summer on loan from Chelsea, was simply superb during the game.

He was full of energy going forward, played out quick forward passes, and created opportunities (leading to the first goal) for other players.

Former Tottenham player turned popular talkSPORT pundit, Jamie O’Hara has showered praise on him on Twitter, suggesting he was “different class” against Spurs.

Credit where it’s due Connor Gallagher has been different class today, run the show #CRYTOT

Enjoying himself at Selhurst Park. 💪 pic.twitter.com/yLpf4ZIBDz

The youngster has adapted quickly to Vieira’s system and has two goals to his name already. What has been really pleasing about his game is that he keeps it simple.

Gallagher is full of energy. He is good at tackling and ball recovery. At the same time, he is equally good with his crosses and key passes.

With Edouard in the side, Palace now has a striker who can covert the chances if he is being properly fed, and the Eagles fans can expect a strong partnership to grow between Gallagher and the French striker in the coming days.