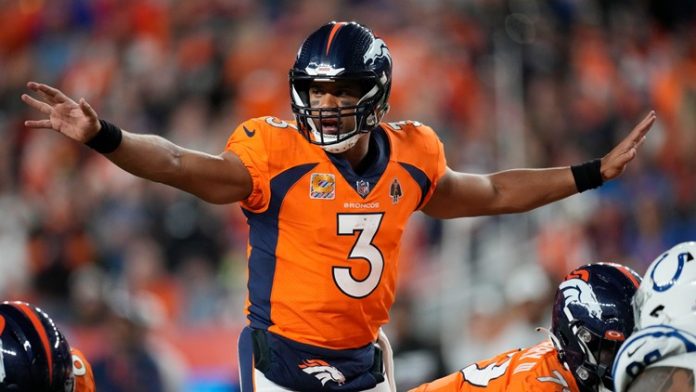 Denver Broncos Quarterback Russel Wilson had a shoulder injection last week, and spoke on Thursday for the first time since the operation saying he is “getting better every day”.

On Thursday Wilson underwent an injection into his throwing shoulder to relieve some of the pain and discomfort the QB is feeling in his arm.

The 33-year old is confident he can come make a quick return from the injury however, and said it is what he is built for.

"I'm built for it." @DangeRussWilson not deterred by tough stretch, believes in Broncos' ability to find success » https://t.co/wg2KgEtLXP pic.twitter.com/r1SkBHKIfh

“I’ve (come back from injury) before and I’ll do it again. I can handle it, I’m built for it. I’m built for the good times and the tough times. …It’s never supposed to be easy.”

Wilson was limited at practice on Thursday, however it was reported by NFL insiders that the QB was more comfortable throwing at practice and isn’t expected to be kept out of the Los Angeles Chargers clash on Tuesday night.

Broncos head coach Nathaniel Hackett was another who seemed happy with the progress made on Wilson’s injury:

“He definitely looks good. Russ has played in the league for a long time, and all players have different things they have to deal with … I think you’re always dealing with that stuff across the board. I think he’s doing an amazing job getting himself to 100%.”