Eurojackpot Lottery in the UK

Get a FREE Lotto Plus line bet

Playing the Eurojackpot Lottery in the UK

You’ll have certainly heard of Euromillions, but the Eurojackpot online lottery might be a new name for you. Established in 2012 as a European lottery to serve the countries not involved in the Euromillions and Operated by Westdeutsche Lotterie GmbH & Co, it started with just seven European countries participating and has now swelled to 17 nations.

Though the Euromillions has more tickets sold and bigger jackpot lottery prize tiers and payouts, there is much potential for the Eurojackpot lotto to at least catch up with the more established lottery that is eleven years older. Euromillions serves a total population of 217 million people, but Eurojackpot reaches a population of 300 million, so it’s probably only a matter of time before sales totals and the jackpot amount become closer.

You can’t buy a ticket from the UK and officially enter, but you can bet on the Eurojackpot numbers, with online lottery websites such as Lottoland. Just pick out your numbers as you would with a regular lottery ticket and if you win, you’ll receive the amount you would have won if the prize fund had been shared between you and the official lottery winners.

With this game you choose five numbers between 1 and 50, followed by two further numbers from between 1 and 12. There’s also a QuickPick option at Lottoland, should you prefer to have your Eurojackpot UK numbers be randomly drawn.

If you’re wondering why you’d bet on a lottery from the UK, when you could actually enter Euromillions, there are some advantages. For starter it’s cheaper to play Eurojackpot online. Ticket sales are just £2 a go, compared to the price of £2.50 for Euromillions.

Then there’s the fact that when the Euromillions is won and reverts back to the opening jackpot, there’s a good chance that you could win more at Eurojackpot. Many people only like to enter a lottery when there’s a huge jackpot, which is not possible to do every week, if you’re just sticking to one game.

The current maximum jackpot with the Eurojackpot lottery is around £100m. While that’s less than Euromillions, there’s a better chance of winning that jackpot. It’s no surprise that Eurojackpot has become the fastest growing lottery in Europe.

The Odds of Winning Eurojackpot Lottery

Our mention of the fact that there’s a better chance of winning the big prize on the Eurojackpot lottery than Euromillions, might have piqued your interest regarding the actual odds.

The chances of winning any Eurojackpot prize are 35/1. That’s not bad at all when you consider that smaller payouts in the prize breakdown would give you a huge profit.

With a lottery jackpot cap of up to £100,000,000, it’s no surprise that the odds of landing such a prize is 139,838,160/1. We all know that it’s extremely unlikely that we’ll land the jackpot when we play any lotto. It’s no different with a Eurojackpot ticket, but ultimately the jackpot gets won by someone on a regular basis, so why couldn’t that someone be you?

In 2021 the Eurojackpot top prize was won on 18 occasions. On average there is a winner of the jackpot, in one in every five draws, so there are regular rollovers.

The following table shows the odds for the various prizes available. Eurojackpot play online from the UK, delivers exactly the same odds.

As previously stated, the Eurojackpot lottery results come in twice a week. It’s every Tuesday and Thursday at 7pm UK time.

If you want to watch the draw for the Eurojackpot lotto online, you can find it at the official Eurojackpot website. You can watch it live, or a replay of the latest draw.

Alternatively, if you just want to catch up with what numbers are drawn, then just go straight to the site where you placed your bet. Sites like Lottoland have a results section for the Eurojackpot online lottery.

How to Play Eurojackpot Lottery

In this section we’re going to show you how to play the Eurojackpot lottery. It’s honestly a pretty simple game and you could likely go straight to a site like Lottoland and have no difficulty in playing it whatsoever. That said, we’d hate for you to make a mistake, so we’re going to go through the rules, step by individual step.

For this example, we’re using Lottoland, our recommended site for playing Eurojackpot from the UK. There’s a link to their site at the end of the steps. 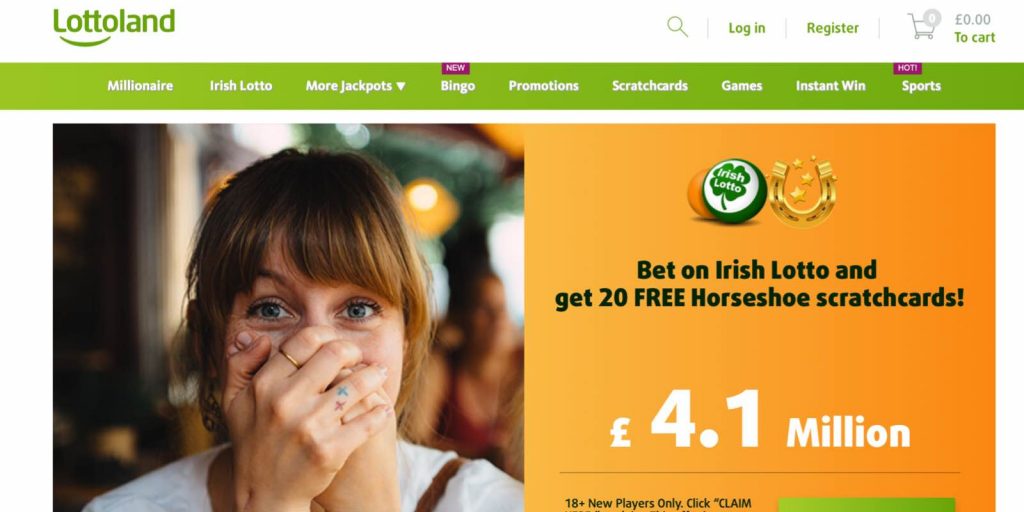 Go to the Lottoland website. There is a dedicated app for both Android and iOS devices too, but when it comes to registering, it’s easier to do on a bigger computer screen. On the top right hand side of the Lottoland homepage there is a green tab marked ‘Register’. Click on it and and pop up will appear. 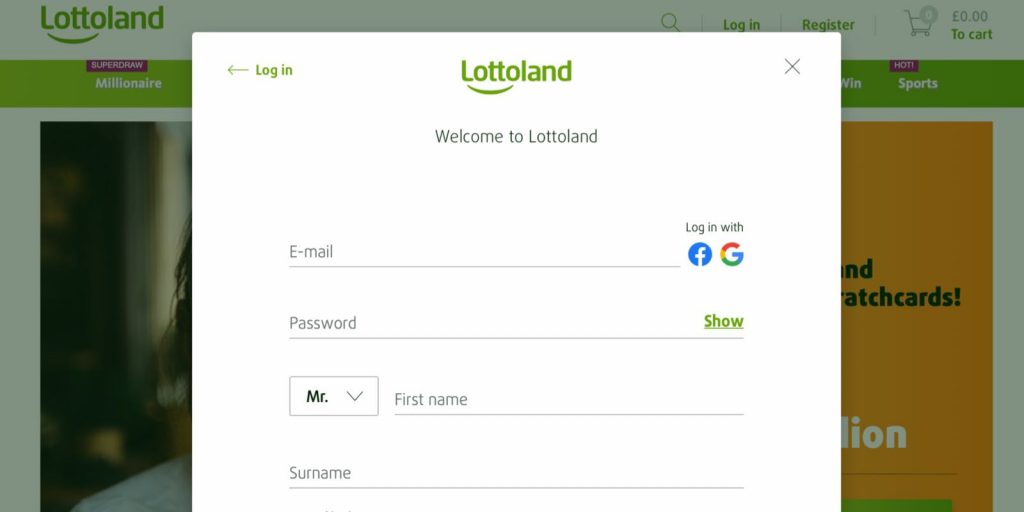 On the pop up you can enter your email address and set a password, or alternatively use your Facebook or Google login. Then set your title, enter your name and date of birth. The last detail is to set your address, which you can search for or add manually. Finally, confirm your age and that accept the terms and conditions, before clicking on the green button at the bottom, marked ‘Create a new account’. 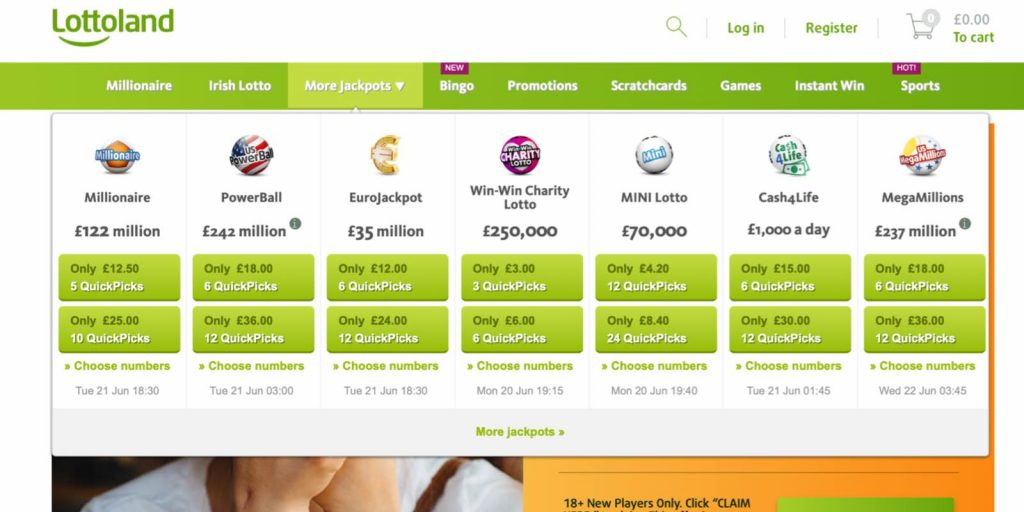 Once registered, it’s time to go to the Eurojackpot section. There is a green menu bar running horizontally across the top of the screen. Hover over ‘More Jackpots’ and a further menu bar will appear, showing different types of lottery games. Amongst them is the Eurojackpot lottery, which you should click on. 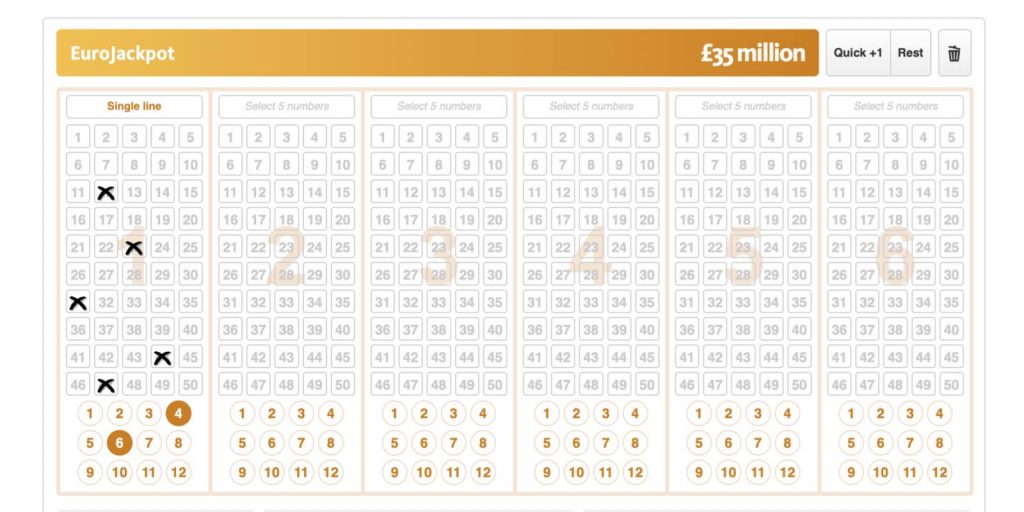 Now you’re on the Eurojackpot section, you’ll see six lotto bet slips at the top of the screen. They might have already been filled in with randomly chosen selections, which you can clear by hovering over the individual slips and clicking on the bin icon. Choose a clear slip and then pick your numbers. Pick five from numbers 1 to 50 at the top of the slip and then a further two from 1 to 12, from the bottom section of the slip.

Once you’ve picked your numbers, all that’s left to do is to finalise the details. Below the slips are a row of boxes. In the first on the far left, you can set which draw you want to enter your lottery bet for. Then in the next box you choose if it’s just a one-off purchase, or you can set it to recur for a number of weeks, right up to a full year. If you are setting up a long-term recurring ticket, you can choose to pay on a subscription basis, while there is also the option of choosing the ‘Hunt’ option, where your bet will continually be placed until the jackpot is won. In the final slot you choose when to place the bet. It can be set for the nearest draw, or further back, including when the jackpot reaches a certain level. 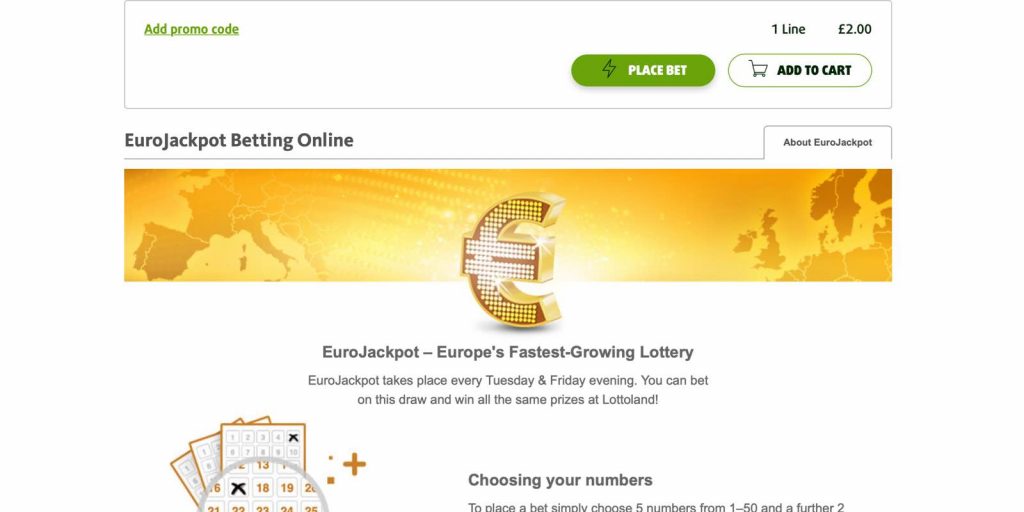 After all the details are ironed out, there’s nothing left to do except placing your bet and paying for it. Scroll a little further down and you’ll see a box showing the cost of your line or lines. Click on the green ‘Place Bet’ button and you’ll move forward to the payment details, where you select a method, enter your details and confirm your payment. Once that’s done, all that’s left to do is to keep your fingers crossed that your balls are drawn out.

We hope you enjoyed our guide to the Eurojackpot lottery for UK users. You’ve seen how to play Eurojackpot online from the UK, by betting on the numbers that are drawn, rather than buying a ticket.

For lovers of lotto, Eurojackpot really delivers. It has large jackpots, frequent draws and it’s cheap to play. We think that the best place to play Eurojackpot lottery from the UK is Lottoland.

Get a FREE Lotto Plus line bet

Can I play Eurojackpot in the UK?

With Eurojackpot, UK players bet on the numbers that are drawn, rather than buying an actual ticket. If you win, you get the amount that you would have received if you’d won alongside the official winners of the draw. They’re our recommended choice to enjoy Eurojackpot play online from the UK.

How to win the Eurojackpot lottery?

What time is Eurojackpot?

Is Eurojackpot the same as Euromillions?

The Eurojackpot is a separate lottery and is played in countries that were not involved in the Euromillions. Though jackpots are smaller, the odds of winning at better and the Eurojackpot UK price is just £2, compared to £2.50 for a Euromillions ticket.