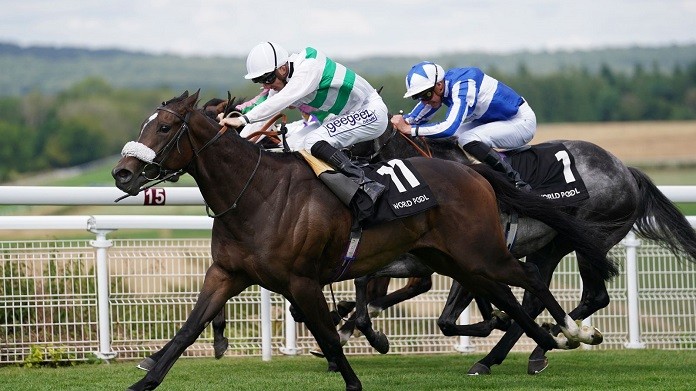 Debate rages about which Group 2 races should be upgraded in the UK next and join the 36 Group 1s in the pattern. It’s a conversation couched in the current topical terms of dwindling field sizes in the British Isles.

Whatever action happens over that issue, the sport of horse racing cannot afford to stand still. It must innovate, however many runners go to post. That got our experts thinking about the current pattern and programme in Britain and the most obvious candidates from the Group 2 races to get upgraded.

While it’s true that horse racing in the UK has undergone some of its biggest changes over the last 25 years, survival depends on change from a sport that has some sectors particularly resistant to it. As readers will soon see, events over seven furlongs are among the primary candidates to become the next British Group 1 in the future:

Outside of the Dewhurst Stakes for two-year-old colts and fillies, there isn’t a top level race in the UK over seven furlongs. In other words, if older horses want to compete in Group 1 company at this specialist distance, then they have to go to France and run in the Prix de la Foret on Arc Weekend.

Amongst the current programme of British Group 2 races at seven furlongs, the Lennox Stakes during the Goodwood races known as the Glorious meeting at the end of July is an obvious contender for upgrading. Although only inaugurated in 2000, it quickly achieved its current status just three years later.

Paco Boy and Space Blues are two notable past winners of the Lennox Stakes, who both went on to even greater things. This is currently the chief supporting race on the opening day of Glorious Goodwood but could always be moved in the schedule if it did become a Group 1.

There are just two top level sprints over the flying five furlongs in the UK. They are the King’s Stand Stakes on the opening day of Royal Ascot and the Nunthorpe Stakes during the York Ebor Festival in August.

In-between those, specialists over the minimum trip can run in one of the Group 2 races, the King George Stakes. First held in 1911 commemorating the coronation of King George V, it’s the traditional feature race on the penultimate day of Glorious Goodwood.

That Friday card could certainly do with a Group 1 on it to keep the momentum built up from previous days thanks to the Goodwood Cup, Sussex Stakes and Nassau Stakes. There is also an imbalance of the British programme of sprints with more top races at six furlongs.

Even taking out age-restricted events like the Commonwealth Cup, Middle Park Stakes and Cheveley Park Stakes, there are still four open Group 1s over this trip. They are the Platinum Jubilee Stakes at Royal Ascot, the July Cup at Newmarket, the Sprint Cup at Haydock Park races in September and the Champions Sprint.

Given its lengthy history and the recent exploits of record four-time winner Battaash, the case for upgrading the King George Stakes from the Qatar Goodwood Festival is pretty strong. Introducing a third British Group 1 over five furlongs makes sense.

It’s true that Newbury races today is a Group / Grade 1 track already but the Berkshire venue has only one Flat and jumps race each with top level status. Outside of the Lockinge Stakes and the spring Classic trials, the next most important events on the level here are a couple of Group 2 races in the Hungerford Stakes and the Mill Reef Stakes.

The former is another of the seven-furlong events that could get an upgrade. Held in a relative lull in the packed summer schedule between Glorious Goodwood and the Ebor Festival at York races in August, the Hungerford Stakes has an interesting history.

When inaugurated in 1949, the contest was over a mile-and-a-half. Over time the trip was reduced to an extended seven furlongs. In 2002, Newbury switched the Hungerford Stakes to the straight course and standardised its distance. Just four years later it became one of the latest Group 2 races in the UK.

Paco Boy, Excelebration, Lethal Force and Dream Of Dreams are high-profile recent winners on its roll of honour. Following criticism of prize money offered at Newbury that led to a two-year-old race having no declared runners, it would be a big boost to this course if they could become home to a second Group 1.

The equine hub of Lambourn is just 15 miles northwest of the track, so it is surprising there isn’t greater depth to the racing held there. This may help to address some of Newbury’s issues.

There’s no better way of putting the case for the City of York Stakes during the Ebor Festival than the way in which York Racecourse chief executive William Derby laid it out recently. “The Flat Pattern Committee has said they want an all-aged seven-furlong Group 1 and they’ve identified the City of York as the candidate,” he said. “The ratings for our race have been very high.

“We’ve hugely boosted the prize money, so it’s the richest racecourse-funded Group 2 and worth more than a lot of the Group 1s. Last year Space Blues won the race, then went on to win the Prix de la Foret and at the Breeders’ Cup. It was fabulous for the ratings.

“We’re trying to do everything to give it the best chance of an upgrade. We’ve removed the penalties [from the race conditions]. It would be tremendous to have a Group 1 race on each day of the Ebor meeting. That’s our aim, whether we get there and when remains to be seen.”

Darby makes an excellent argument. Only promoted to a Group 3 from Listed level in 2016, the City of York went up another grade just three years later. Recent wins for Expert Eye and Space Blues, who both went on to Breeders’ Cup Mile success, have certainly helped raise this race’s profile.

Only two of the Cup races for Flat stayers enjoy Group 1 status in Britain. They are the Ascot Gold Cup during the royal meeting and the Goodwood Cup. The Doncaster Cup is another historic staying race yet has a worrying trend of dwindling field sizes.

Just three years later, it became one of the Group 2 races in the current programme. Tracing its history at the headquarters of British Flat racing back to 1873 through its old title, the Long Distance Cup has attracted nine or more runners in all but one year to date since the switch to Ascot.

Competing horses must often perform on soft ground, so horse racing results on Champions Day are often different to staying races held on sounder surfaces over the summer. That’s something to bear in mind when betting.

The Long Distance Cup being a Group 2 on a day of championship races sticks out like a sore thumb. It has the prize money to match an elite level staying contest too. Expect changes to the pattern, namely more Group 1 races, in the coming years.