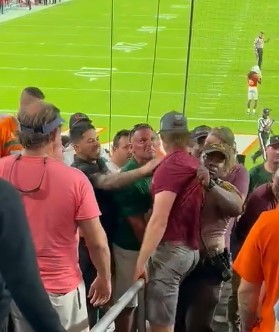 On Saturday, the Miami Hurricanes got the snot beat out of them on the field by the Florida State Seminoles. However, it was a different kettle of fish in the crowd where a FSU fan was on the receiving end of a beating from the Canes fans. Buckle up folks, we have another college football crowd fight although this one is a bit tamer than usual.

You can’t have a Florida State versus Miami game without a little bit of trouble in the crowd. It is an unwritten rule of college football. Saturday’s game was no different. FSU beat Miami 45-3 and some FSU fans faced the wrath of an angry mob.

In a video that appeared on Twitter on Saturday evening, an FSU fan can be seen getting escorted from the crowd.

As the Seminoles fan is being dragged to the exit, he receives a slap from a Miami fan, who appears to be hiding behind another Canes fan.

A friend of the escorted fan then attempts retaliation and a small battle breaks out between the friend and a couple of Miami fans. Punches are thrown and our popcorn just finished popping, but that part was over by the time we went to grab it.

It does continue though as the FSU fan somehow breaks somewhat free of his escort and squares up to a different Miami fan.

This time, he gets shoved backwards and stumbles to the ground. His friend once again gets back into the action, swinging haymakers at the new Miami fans in the background.

That does not end well for him and he ends up getting laid into by several Miami fans before the video comes to an end.

Off the field Miami is beating the dog shit outta FSU pic.twitter.com/6099LjrIfp

As usual, Twitter was abuzz with fans reacting to a college football crowd fight. One of our favorite tweets reacting to the crowd brawl is the one below comparing the ‘Angry Bald Dude’ to the red face emoji.

I’ve never seen someone go 😡 but this fucking guy did it. Im actually impressed. pic.twitter.com/2rc7sdpZmK

Another tweet aimed at ‘Angry Bald Guy’ below also had us chuckling.

That dude is not happy with where the program is at…at all. pic.twitter.com/4JSYRJabqY

Another tweet notes how disinterested security is in the situation, which is kind of understandable given he was just one man.

My mans wanna go away. pic.twitter.com/daU6zoSGor

All in all, good work from Twitter. There are some tweets saying the FSU fans were belligerent and trying to fight women, children and the elderly. We cannot confirm how it all began, but we are always happy to report on a good old fashioned scuffle.