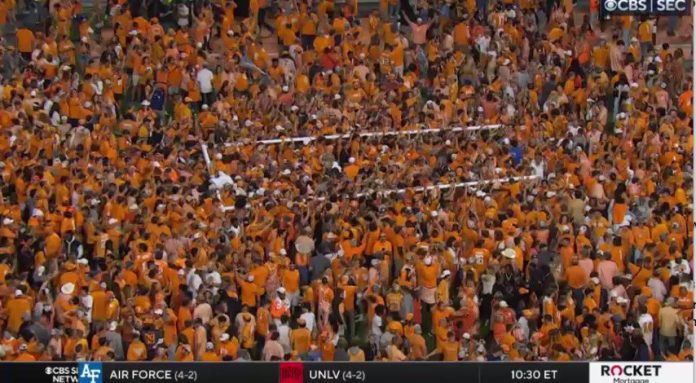 Saturday was a great day to be a Tennessee fan. The Volunteers took down Alabama 52-49 after a last second field goal sent them into ecstasy. After the game, fans stormed the field and tore down the goalposts as they had done in 1998 after a win against Florida. With the goalposts in the Tennessee River, the Tennessee football Twitter account asked fans to donate for new goalposts for Saturday’s game against Tennessee-Martin.

Tennessee fans tear down the goalposts and head to Tennessee River

After the last second knuckleball of a field goal wobbled over the uprights for the Tennessee victory on Saturday, we all knew what was about to happen. The fans were getting on that field and those goalposts were going to the Tennessee River.

The game itself was thrilling, ending with an incredible 52-49 scoreline in favor of the Vols, but the post game celebrations we a joy to behold. There’s nothing quite like college football for the spontaneous field rush after a big win.

With the goalposts down, it was time to take them to their resting place, the Tennessee River. Fans marched through the stadium and through the streets on the way to pay a bizarre and wonderful tribute to their team.

THE GOAL POST IS ON THE STRIP. #GBO #Tennessee pic.twitter.com/ae6jtTs7QM

After the march through the streets, we get to see how the story ends for the goalposts in the below video:

With the goalposts gone and the program facing a large fine for the fans storming the field and the cost of new goalposts, apparently the university is struggling for cash. We jest, of course, but it did not stop the Tennessee football Twitter account asking for donations.

In a tweet from @Vol_Football, the official account of the program’s football team, the school appeared to want to crowdsource funds for new goalposts. The tweet read:

“Y’all remember how we tore the goalposts down, hauled em out of Neyland and dumped em in the Tennessee River?

Yeah that was awesome.

Anywho, turns out that in order to play next week’s game, we need goalposts on our field. Could y’all help us out?”

Y'all remember how we tore the goalposts down, hauled em out of Neyland and dumped em in the Tennessee River?

Yeah that was awesome.

Anywho, turns out that in order to play next week's game, we need goalposts on our field. Could y'all help us out? 🙏 https://t.co/NSMoL3SzPX

Currently, they have raised just short of $100,000 with the most popular donation being $16, the number of years since the last win against Alabama. For all those fans waking up with a hangover, it seems a small donation was probably worth the fun Saturday night brought about.