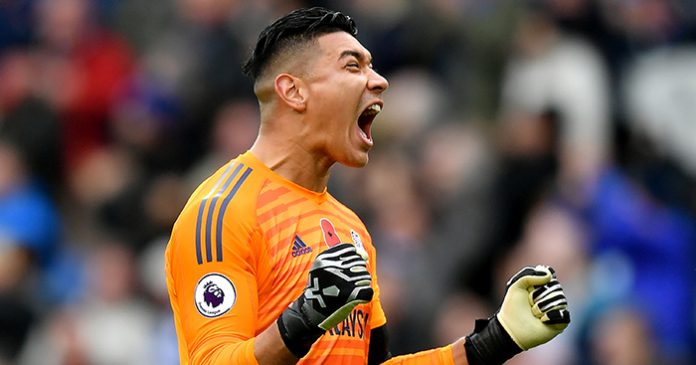 Aston Villa have completed their 10th signing of the summer today after the club confirmed the arrival of Douglas Luiz from Manchester City.

The Villans have splashed over £100 million on new signings, but the newly-promoted Premier League side are not done yet with their transfers.

Dean Smith is still looking to bolster some of the areas of the squad, and one of them is the goalkeeping department.

According to reports from The Express and Star, Villa will now turn their attention towards signing a goalkeeper and Smith has been left largely frustrated in his attempt to land his targets.

Villa are interested in Jack Butland, but Stoke City are refusing to sell him for below £23 million. They are also interested in Tom Heaton but could face strong competition from Liverpool.

The report adds that Villa are still in the hunt for Cardiff City goalkeeper Neil Etheridge.

The 62 times capped Philippines international could be a sensible option for Villa given they are finding it difficult to land both Heaton and Butland.

Etheridge was incredibly impressive for Cardiff last season, and signing him would solve one major problem for Villa. This has been a brilliant transfer window for them, but it can get even better if Smith can land a goalkeeper before the window closes.