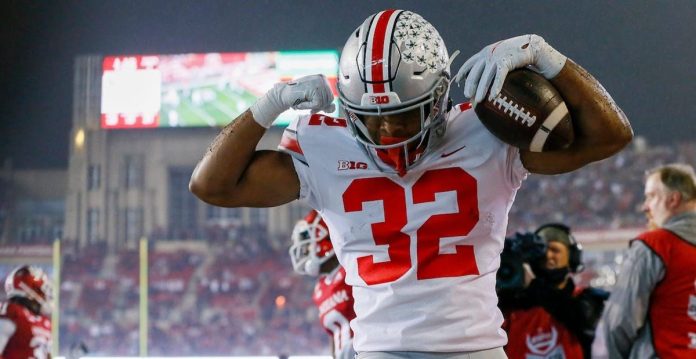 Buckeyes fans should click on the arrow that points left on their device of choice if they do not want to read more bad news about their team and the College Football Playoff. Ohio State running back TreVeyon Henderson has declared that he is done for the season due to injury. Already without wide receiver Jaxon Smith-Njigba, Ohio State will now be missing two crucial skill players going into the CFP.

Henderson done for the year

TreVeyon Henderson’s season is over as the Buckeyes running back is unable to recover from injury in time for the College Football Playoff. Henderson last took to the field in the Ohio State victory against Maryland on November 19.

Henderson tweeted on Tuesday that he would miss the Peach Bowl game against Georgia along with any additional games should the Buckeyes win.

“As much as I wanted to finish out the season with my brothers, I know god have bigger and better plans for me,” Henderson said. “It’s always light at the end of the tunnel, be back better than ever.”

As much as I wanted to finish out the season with my brothers, I know god have bigger and better plans for me! Its always light at the end of the tunnel, be back better than ever.. 🙏🏽 #KeepGoing

While Jaxon Smith-Njigba will declare for the draft, it is expected that Henderson will be back with Ohio State next season. Henderson will end the season with 571 yards at 5.3 yards per carry with six rushing touchdowns.

The starting running back spot for the Buckeyes will now belong to Miyan Williams, who was already splitting carries with Henderson prior to his foot injury. Williams has also suffered from injury over the last month, but has been in tremendous form this season.

Ohio State will face Georgia in the semi-final of the College Football Playoff on December 31.