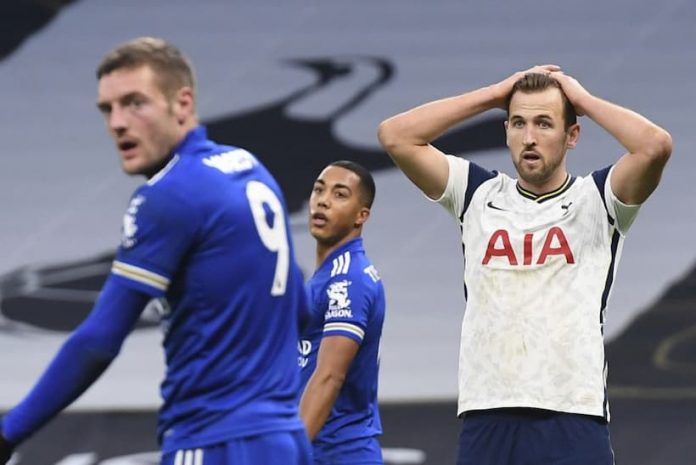 After a long layoff due to COVID-cancellations, Leicester City fans finally get the chance to cheer on their side in the Premier League again when the Foxes face Tottenham Hotspur at the King Power Stadium tonight.

Spurs are sixth and Leicester tenth in the league table at present. Both sides have up to four games in hand on their rivals for European places, though. And, a solid run of form beginning this evening is likely to catapult either team into the upper echelons of the table and, thus, the conversation for UEFA Champions League places.

For information on Leicester City vs Tottenham Hotspur live streams, a full preview, the latest team news, and a free bet, read on:

If you’re looking to live stream the Premier League match between Leicester and Tottenham tonight, then bet365 is a top option.

Just sign up at bet365 to watch a Leicester vs Tottenham live stream, as well as countless other fixtures from across the world of football.

Leicester City finally get their league campaign back underway in 2022 when Spurs pay the King Power a visit later this afternoon. Since New Year’s Day, we’ve only seen Brendan Rodgers’ team in action once, a 4-1 victory over Watford in the FA Cup.

The Foxes had recent fixtures vs Everton and Burnley called off due to COVID-19 outbreaks. But, in their last league match before this unfortunate spell of luck, Leicester did pick up a vital three points at home to Liverpool. Ademola Lookman’s goal was the difference between the two sides, helping the Foxes move on to five straight wins at the King Power.

Following a rough start to the campaign, the Liverpool result -and the clean sheet that went with it- was a much-needed confidence booster for Brendan Rodgers’ side. In the previous EPL encounter vs Manchester City, the Foxes shipped six goals and, at that point, had conceded 33 goals in just 17 games.

Brendan Rodgers will certainly be hoping the solid defensive effort from his side continues vs Spurs this evening.

Like Leicester, Antonio Conte’s Tottenham endured a lull in games thanks to the COVID pandemic. Most recently, the north London derby vs Arsenal was called off last Sunday as Mikel Arteta’s side was short of players. This cancellation meant that -to date- Spurs solitary Premier League match in 2022 is still the 1-0 win vs Watford on January 1st.

Tottenham were also knocked out of the League Cup by London rivals, Chelsea, losing by three goals to nil over the course of two legs. Conte’s side did rebound well enough to defeat third-division side, Morecambe, in the FA Cup, however.

After the Liverpool result, Leicester have now won five games in a row at the King Power Stadium and will head into tonight’s clash in good sports as a result.

Spurs, on the other hand, -though much improved under Conte- are yet to win back-to-back league games with the Italian at the helm, meaning the north London side could be in for a tricky test up in the West Midlands.

There are also a host of Leicester vs Tottenham betting offers available for this game, click here to find out more.

When does Leicester vs Tottenham kick-off?

The English Premier League clash: Leicester vs Tottenham begins at 19:30 BST, on the 19h of January at the King Power Stadium, Leicester.

Brendan Rodgers will be unable to field any of Wilfred Ndidi, Daniel Amartey, Nampalys Mendy, or Kelechi Iheanacho since all players are away on international duty at the Africa Cup of Nations.

On top of that, Jamie Vardy, Wesley Fofana, Jonny Evans, Ricardo Pereira, and Ryan Bertrand miss out through injury, leaving Rodgers with a depleted-looking squad for the visit of Spurs.

Better news regarding wing-back Timothy Castagne and midfielder Boubakary Soumare, though. The pair are expected to be fit to play a role if needed.

Spurs Korean star Son Heung-min is out until February with a calf injury.

Eric Dier, Cristian Romero, Sergio Reguilon, and Dutch winger, Steven Bergwijn, are all doubts for the trip to the King Power, too.