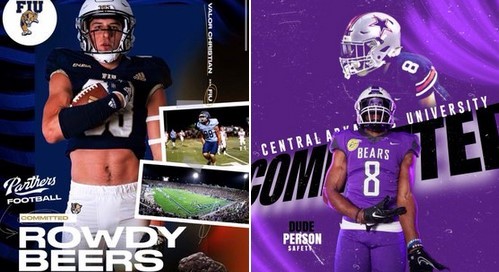 There are big decisions to be made by high school football players heading to college up and down the land over the next two months or so. Many of these players will become household names over the next decade or so, but some names are already causing quite a stir in the college football world. ‘Dude’ Person and Rowdy Beers will join the college football ranks next season and their names are already First-Team All-Americans. Here’s what we know about the two guys with the funny names so far.

Rowdy Beers and ‘Dude’ Person may sound like a couple of names you give to a cop who pulls you over for speeding when you have an arrest warrant out, but these two talented football players will be joining the college ranks next year.

Rowdy Beers is a 6-foot-5 225 lbs tight end from Littleton, Colorado. He has committed to Florida International next season. According to On3, he is a three-star recruit, while Rivals has him a two-star prospect. ESPN and 247Sports do not currently have a grade for Rowdy Beers.

Meanwhile, ‘Dude’ Person has committed to Central Arkansas according to his Twitter profile. According to his Hudl profile, Person is a 5-foot-11 195 lbs safety whose first name his actually Rontavious, but that is not quite as cool, so we are definitely rolling with ‘Dude’ for now.

What a 24 hours for names. Rowdy Beers and Dude Person. The name economy is THRIVING. pic.twitter.com/DJamwUbIwK

Person played in junior college last season helping Northwest Mississippi Community College Rangers to a 9-3 record. He led the team with 70 tackles and 5.5 tackles for loss.

Rowdy Beers and ‘Dude’ Person will join the likes of Oklahoma QB General Booty and former North Carolina defensive back Storm Duck in the college ranks.

They will all be competing at the end of the year for the SportsLens DeColdest Crawford Award, which goes to the best name in college football.