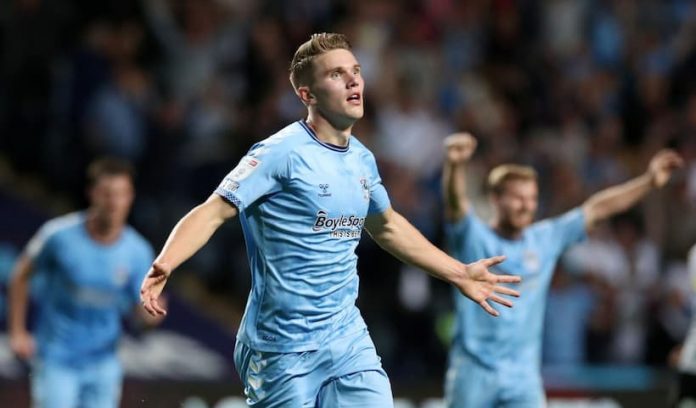 Coventry vs Stoke City at the Ricoh Arena is one of the crunch Championship games scheduled for later this evening.

The Sky Blues are currently 10th in the table, one point behind tonight’s opponent, Stoke City, and with a game in hand.

A win for Mark Robins’ side this evening would see Coventry leapfrog the Potters and Nottingham Forest into 8th position.

Furthermore, should the out-of-form Sky Blues then go on to win the two games in hand they have on the majority of the chasing pack for the playoffs, Coventry fans could see their side go as high as 5th in the league and in with a genuine chance of a return to top-flight football.

For information on Coventry vs Stoke City live streams, a full preview, the latest team news, and a free bet, read on:

If you’re looking to live stream the Championship clash between Coventry and Stoke City tonight, then bet365 is a top option.

Just sign up at bet365 to watch a Coventry vs Stoke live stream, as well a plethora of other fixtures from across the world of football.

Stoke manager Michael O’Neill will probably feel his side was unfortunate to come out on the wrong end of a 2-3 defeat to league-leaders Fulham on Sunday.

Stoke played well but it wasn’t to be as the Potters succumbed to a late strike from Fulham’s Bobby Reid.

Still, though, Stoke City performances have certainly picked up since Christmas. The Potters just need to start turning performances into points if they’re to keep themselves in the mix for a playoff push.

Like Stoke, Coventry City have been playing decent football but, of late, just haven’t been picking up the points. Mark Robins’ side had the better of the game vs QPR last time out but ended up on the wrong end of a 1-2 loss, making it just one win in eight games for the Sky Blues, a run that includes three consecutive defeats at the Ricoh Arena.

With games coming thick and fast in the Championship, Coventry City have games in hand and are still in with a genuine chance of a promotion charge IF they can regain their winning mentality.

But the push to get back into the Premier League for the first time since being relegated in 2001 has to start tonight with a win against an evenly-matched Stoke City side.

There is also a host of Coventry vs Stoke City betting offers available for this game, click here to find out more.

When does Coventry vs Stoke City kick-off?

The Championship clash between Coventry & Stoke kicks off at 19:45 BST on January 25 at the Ricoh Arena, Coventry.

Jake Bidwell came on as a sub and played well at left-back against QPR so could be set for his first Coventry start this evening.

Stoke City have no fresh injury concerns and are expected to field a similar team to that which started in the loss vs Fulham, though manager Michael O’Neill may see fit to freshen things up slightly – possibly by introducing Vrancic back into the midfield.

Former Manchester United player, Nick Powell, who has six goals and three assists in the league to date, is also pushing for a starting birth after three months out with injury.