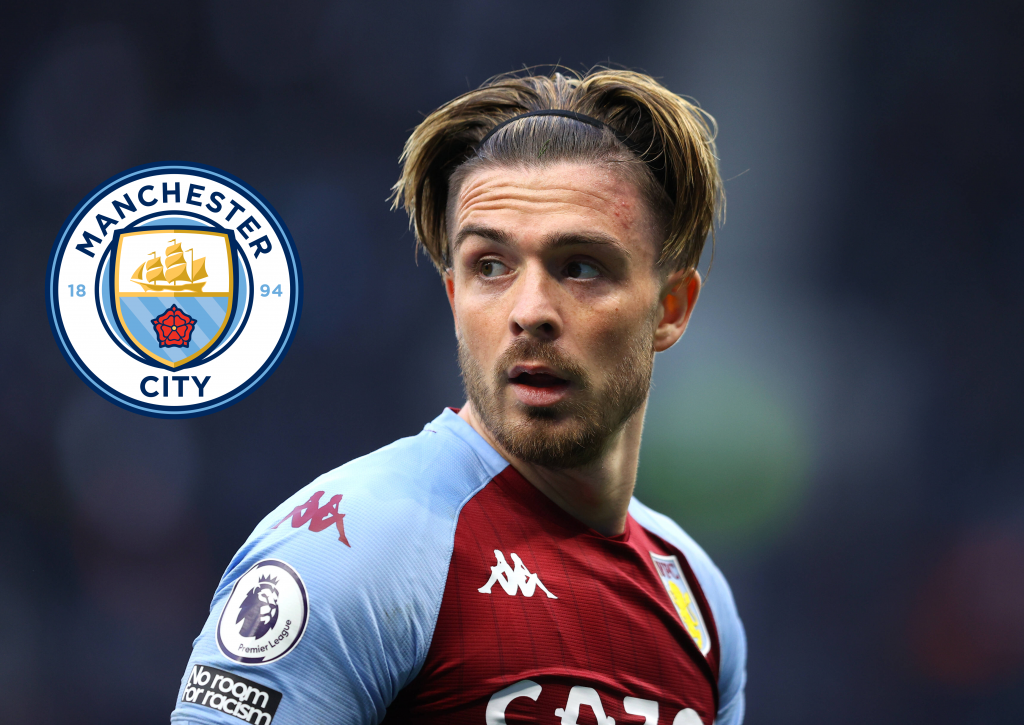 After a fairly long and drawn out period of speculation and reports (where people went as far as analysing body language in training ground conversations), Jack Grealish has finally joined Manchester City for a Premier League record transfer fee of £100 million, signing a six-year contract.

We are delighted to announce the signing of @JackGrealish on a six-year deal.

The 25-year-old Englishman has been on Aston Villa’s books for about 20 years as he joined the youth academy in 2001, spending only one year away when he went on loan to Notts County in the 2013/14 season.

Grealish signed a contract extension as recently as September 2020, pledging his services to the Villains until 2025, but he clearly won’t be sticking around any longer as the Blue side of Manchester will benefit from his footballing services hereafter.

So, let us explore his playing style and what he will add to the latest edition of Pep Guardiola’s City:

Grealish is a skilful right-footed attacker, capable of playing both centrally and off the left. 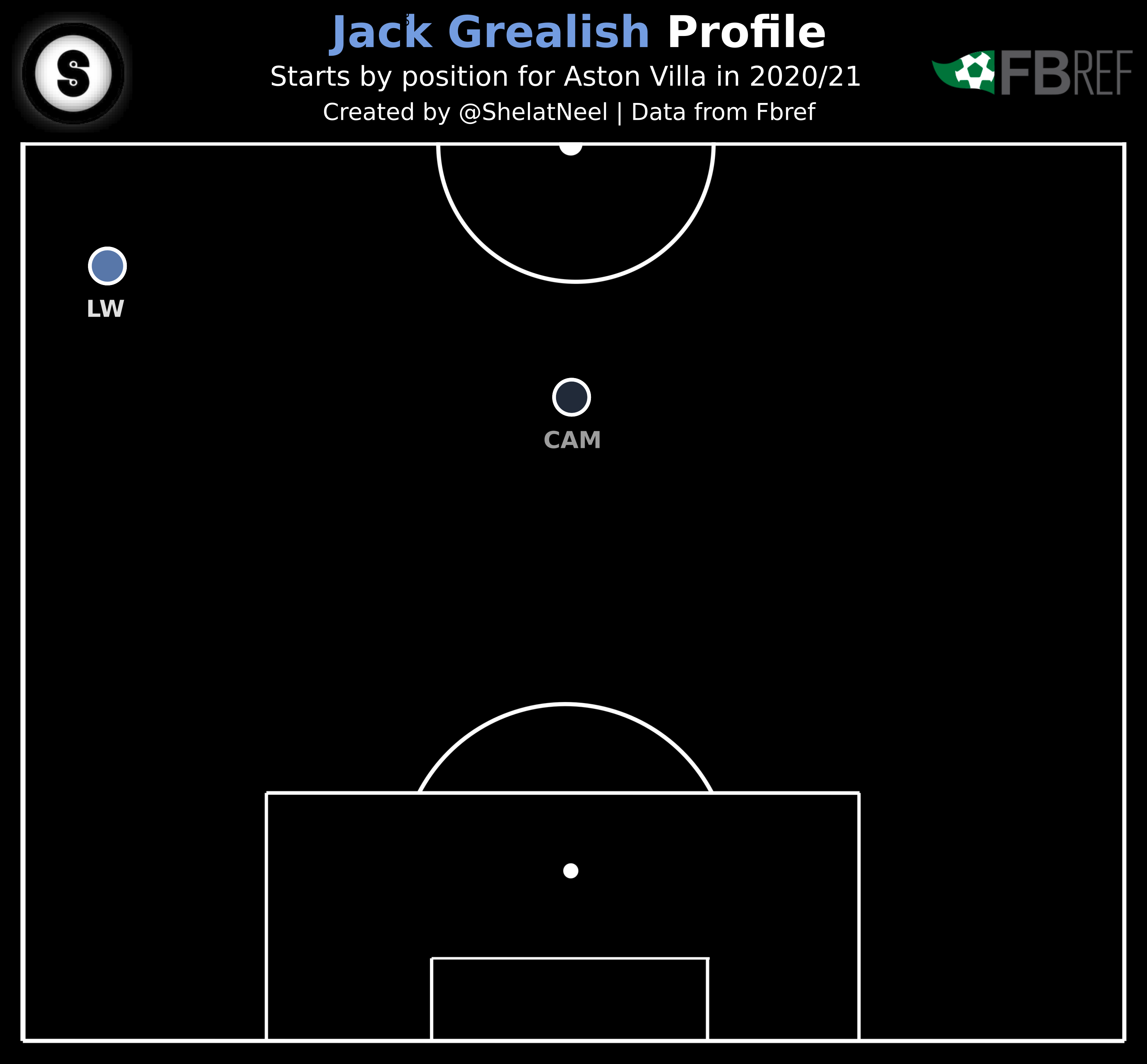 Villa almost exclusively used a 4-2-3-1 last season, which saw their captain start 19 matches on the left and six in the number 10 role (he missed a good chunk of games through injury).

As far as his personally preferred position is concerned, Grealish answered it himself way back in 2017:

I prefer advanced midfield, like a No. 10, but you know me: I’ll play anywhere for Villa.

The most well-known statistic about Grealish is that he is the most fouled player in the Premier League.

He drew the referee’s whistle 109 times last season (at least 20 more than any other player) despite missing over 1,000 minutes of league football. Naturally, his dribbling and ball carrying are rather good. 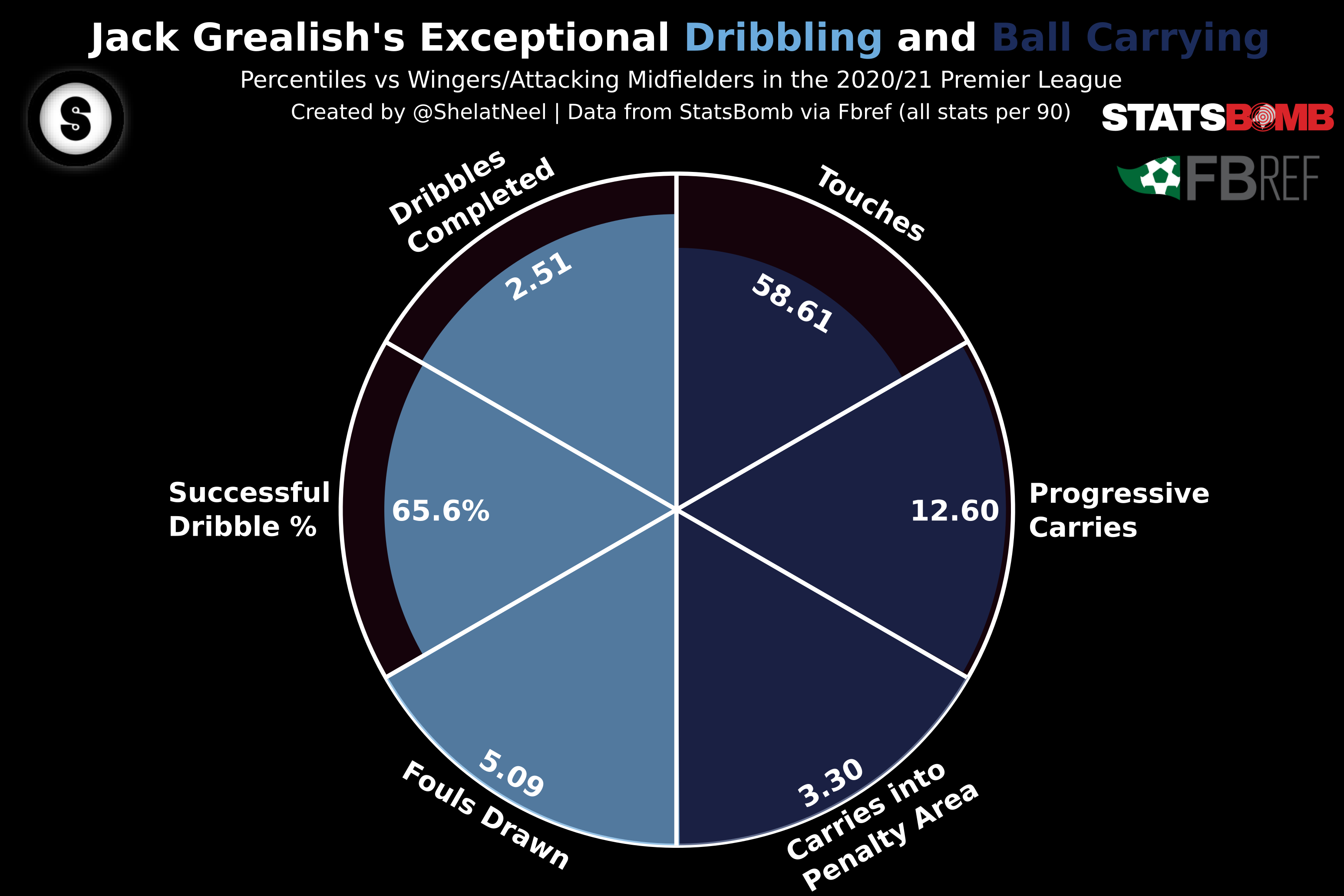 He was by far Villa’s most important player in their latest Premier League stint, so they relied incredibly heavily on him for ball progression and creativity, which is why his passing numbers are outstanding too. 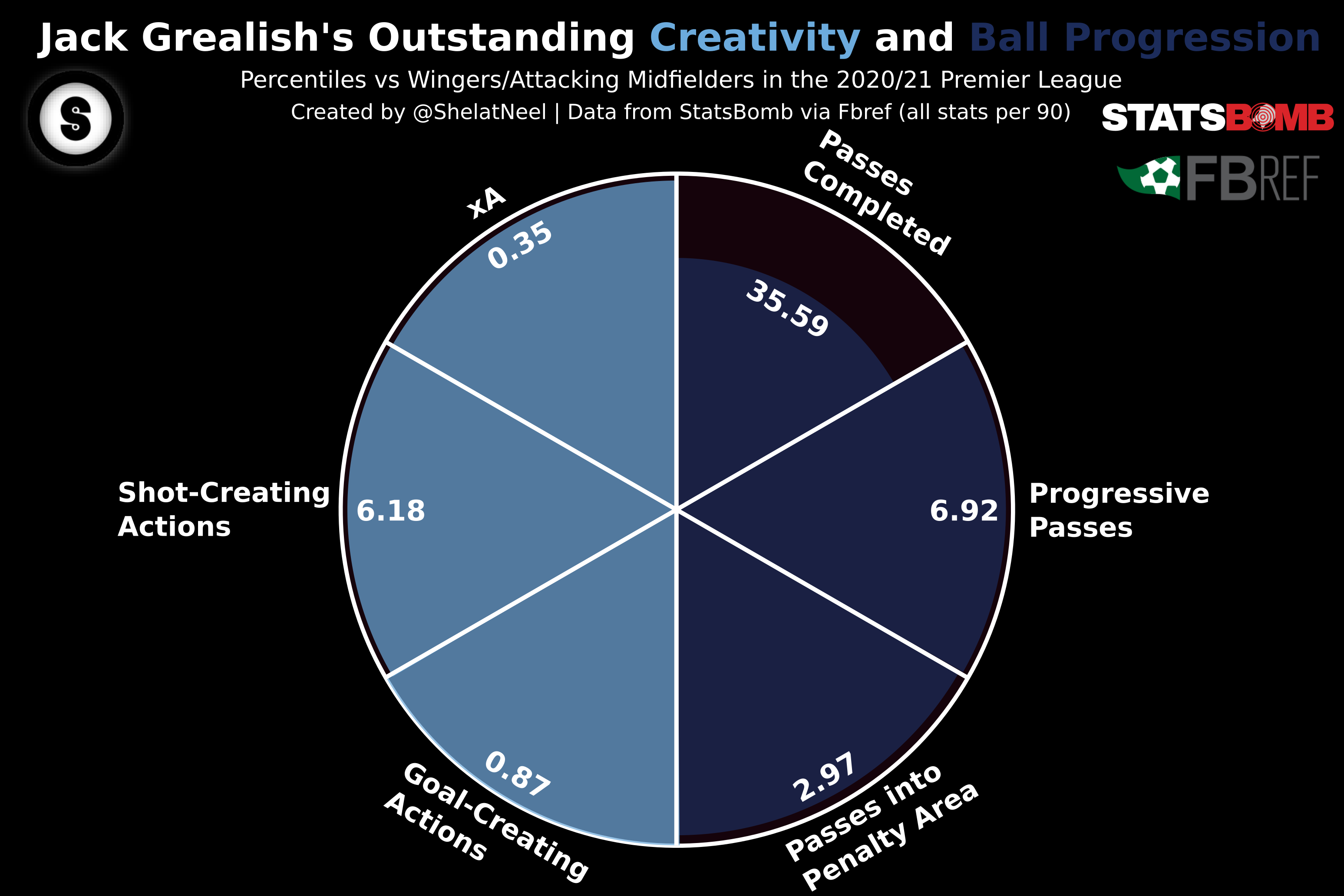 He was quite literally carrying Villa’s attack at times, with an involvement in 83% of moves ending in goals last season.

City usually have to work in very tight spaces in attack, which is another area where Grealish excels.

Besides drawing fouls, he is also great at releasing the ball in such situations, completing an average of 9.19 passes under pressure per 90 – taking him up to the 90th percentile among his compatriots.

A respectably high 7.50 progressive passes received per 90 shows that the English international also knows where to be off the ball.

Basically, if you have the ball somewhere around Grealish, he can work wonders for your side.

There aren’t too many weaknesses in Grealish’s game in possession, so his main shortcoming is defensive, where his work rate seems far from impressive.

An average of 13.02 pressures per 90 in the most recent Premier League season ranks him way down in the 20th percentile among fellow attacking midfielders and wingers, which certainly does not bode well for City, whose beautiful possession-play is built on the foundation of a very well-executed press.

There is a simple explanation for this, though – Villa tended to switch from a 4-2-3-1 to a 4-4-2 in defence, with Grealish acting as a part of the front line where his role was to close passing lanes, which is reflected in his relatively very high pressure success rate of 31.6%. 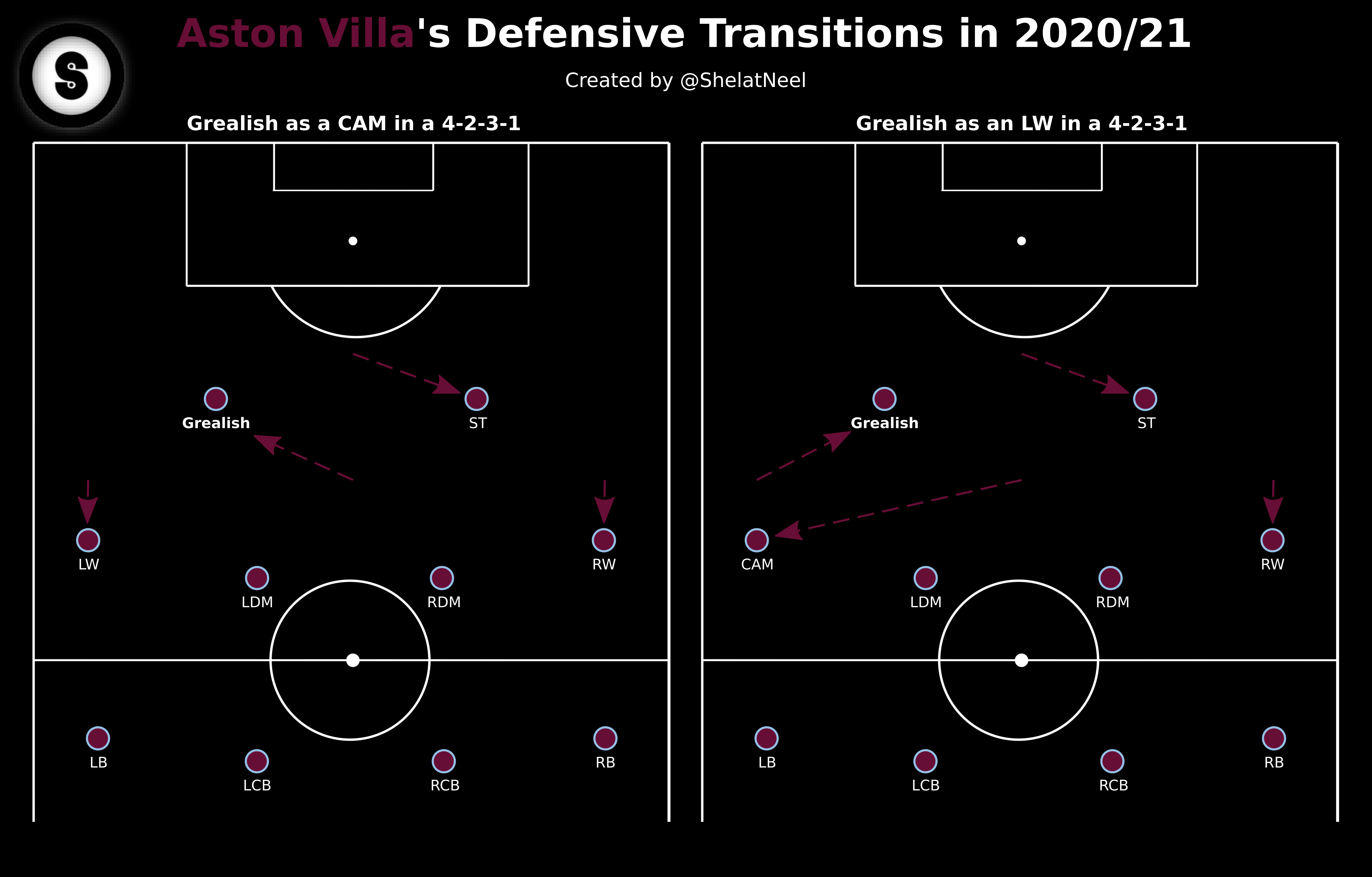 Undoubtedly, he will be asked to play a vastly different role by Guardiola at City, so this is an aspect of his game that the Irish youth international will need to improve in Manchester.

There certainly is a lot of intrigue about how Grealish will fit into City’s current system, so let us dive right into it.

Guardiola’s winning formula was a 3-2-2-3 system in possession from a 4-3-3 on paper, which has a few positions for Grealish to slot into. 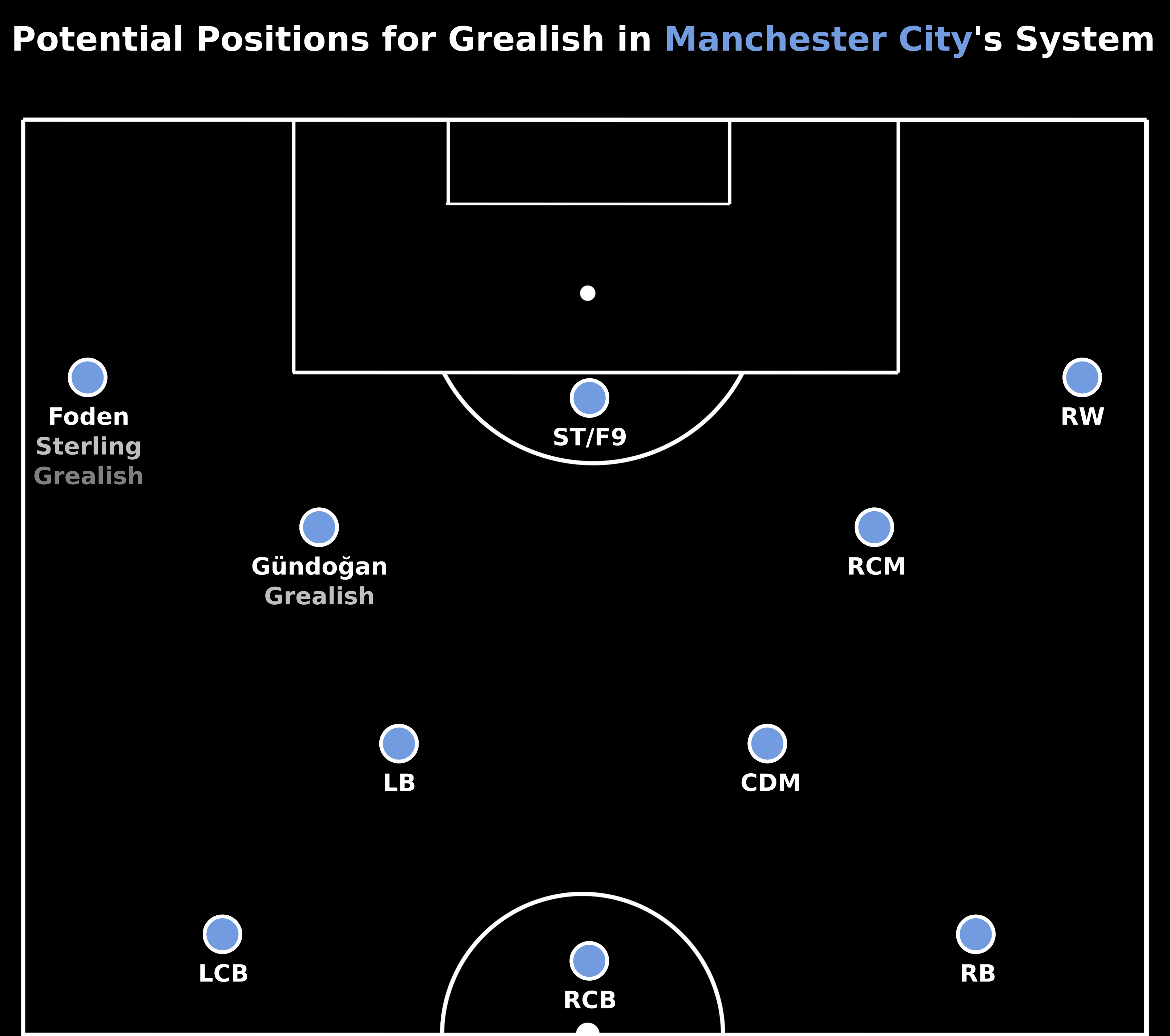 The left wing position has been his favourite at Villa of late, but the Englishman will face stiff competition from his national team compatriots Phil Foden and Raheem Sterling.

The good news for their manager, though, is that all of them have varying skill sets – Foden is an exceptional left-footed dribbler who can be used as a natural winger, Sterling provides brilliant off-ball movement coupled with a keen eye for goal, and Grealish is a more typical inverted winger.

In the left of attacking midfield, Grealish will only have Gündoğan to contend with, but the primary issue is that he will be a number 8 on paper in the 4-3-3, which is where his defensive weakness might be exploited.

One workaround might be to ask him to push forward centrally in the 4-2-4 press/4-4-2 defensive shape that City employ.

Guardiola has previously done this with Bernardo Silva off the right, albeit to improve his pressing.

The final option might be to test Grealish as a false nine, but there is no data to look at to assess whether he will be successful in that position, so that will be a bit of a gambit initially.

As far as what Grealish will have to change in his playing style, well, there’s quite a bit.

First of all, he will need to start releasing the ball a lot quicker and stop drawing so many fouls because City aren’t particularly good at set-pieces or even penalties.

More importantly, Guardiola prefers to maintain a constant tempo, which is hindered by repeated breaks in play.

Equally, it will be important for his mindset to shift from being a star attraction at Villa to one of many top-tier attacking talents at City.

This can also be turned into an advantage, though. Grealish generates incredible amounts of gravity, causing opponents to often double or at times even triple on him.

While they might have been able to get away with that against a Villa side that was missing some of its other key players, doing so against City will prove absolutely disastrous as it will free up the other dangermen.

At the same time, letting Grealish go one-on-one against someone will also not end too well

Of course, it’s never this simple, but imagine being a midfielder in the Premier League who sees Grealish to his right and Kevin De Bruyne to his left.

On their day, there is absolutely nothing you can do to stop either of them, let alone both in tandem, so a little sabbatical might seem quite lucrative.

Secondly, he will have to stop dropping so far deep to aid in ball progression as City have their own specialists in that department, especially when playing on the left wing. 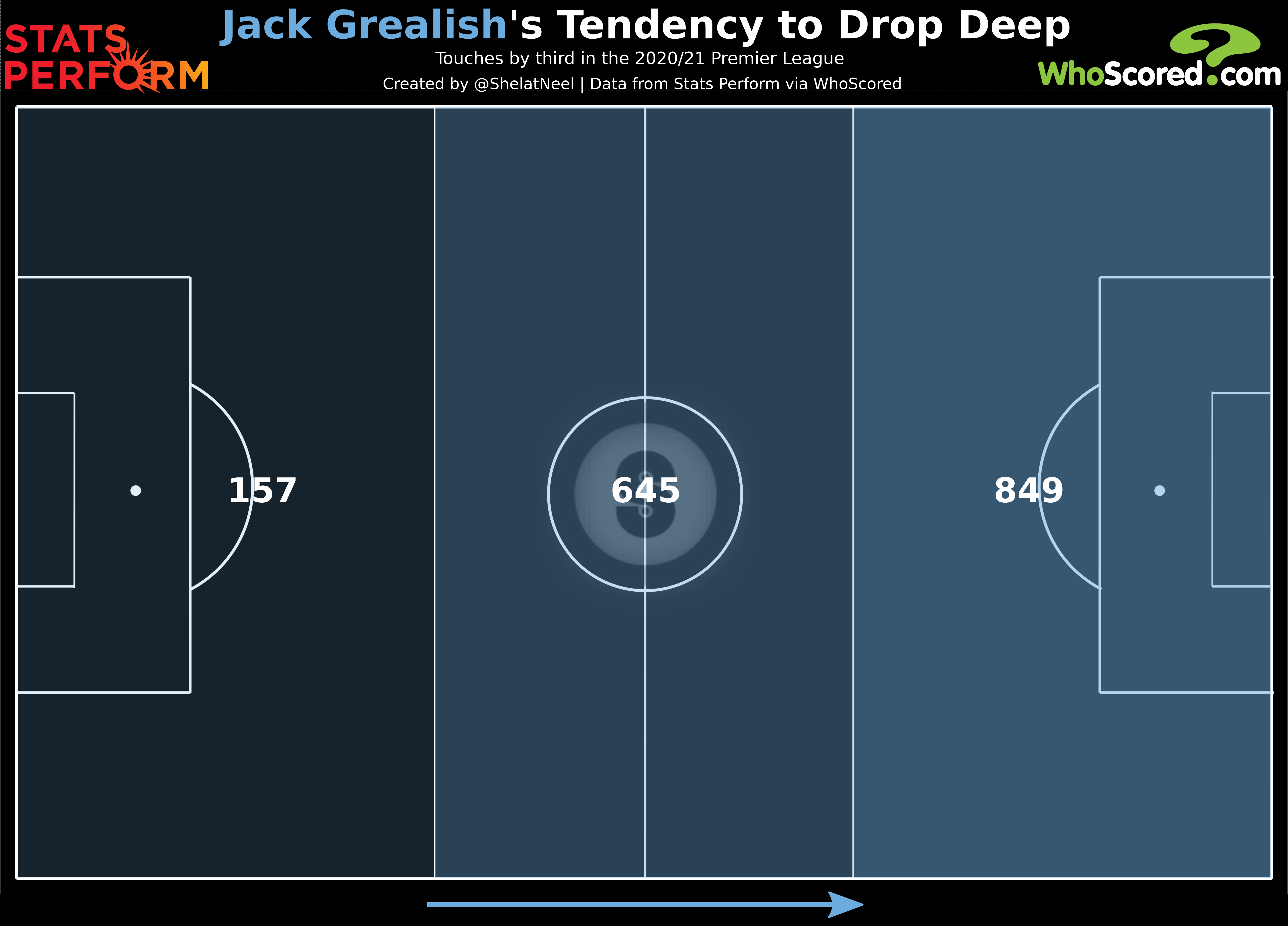 As you can see here, despite mostly playing as a left winger, Grealish racked up just over 100 fewer touches in the midfield third than in the attacking third, which is not something Guardiola will appreciate.

Naturally, some of this will automatically change thanks to City’s territorial dominance, but the Englishman will have to put in the work to make a complete switch.

As much as we can sit here and comment on the discrepancies between Grealish’s style of play and that of City, there can be no doubt that Guardiola has a very clear plan in mind as to how he will use the Englishman.

He gave the go-ahead to smash the Premier League transfer record and even broke a personal anti-football discussions rule while golfing to get a better idea of what Grealish is like.

Of course, making the step up from a mid-table Premier League side to one of the best teams in Europe is not easy, which is why City and their fans must be patient with Grealish despite his nine-figure price tag.

Perhaps the closest profile that City have in their current squad to their newest signing, both individually stylistically and in terms of their former club’s playing style, is Riyad Mahrez.

As we have seen, he needed about a fair amount of time to adjust, but ever since he hit his stride, he has been unstoppable.

The big debate among fans of both concerned clubs is whether Grealish is making a mistake by foregoing an opportunity to be a club legend at Villa in search of greater heights and trophies at City.

However, that is a personal decision that can only be assessed with the benefit of hindsight.

It should be said, though, that from City’s point of view, between Grealish and a world-beating striker, the latter probably was the higher priority.

They are still very much in the race for Harry Kane, but anything is possible in that saga.

As for Villa, they will have to do with the massive boost their bank balance has received and continue with their project even without their star man.

They have already done so by signing Emiliano Buendía, Leon Bailey and Danny Ings and are showing interest in Todd Cantwell.