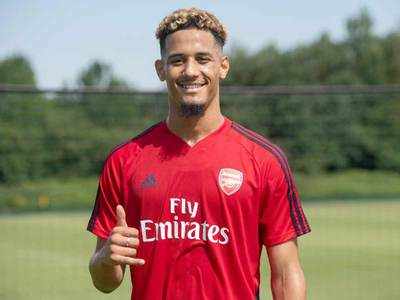 Leeds United and Fulham are interested in signing William Saliba from Premier League rivals Arsenal in the summer transfer window, according to Le10 Sport.

It has been reported by the French news outlet that Arsenal are open to sending the 19-year-old defender out on loan before the window closes this month.

Fulham and Leeds, both of whom won promotion from the Championship at the end of last season, are interested in securing the services of the France Under-20 international on loan, according to the report.

Arsenal signed Saliba from French club Saint-Etienne in the summer of 2019 for a transfer fee reported by Sky Sports to be worth £27 million.

According to WhoScored, the France Under-20 international made 11 starts and one substitute appearance in Ligue 1 last season.

The teenager also played twice in the Europa League last season, while in 2018-19, he made 13 starts and three substitute appearances in the league, according to WhoScored.

Saliba is a very good and promising young defender, and he would make Leeds or Fulham better in central defence.

Arsenal do have a lot of centre-backs in their squad, and manager Mikel Arteta can afford to let Saliba leave on loan.