Reuters reports that during the Women’s World Cup currently being played out in China, there was a curious incident involving the Denmark team.

Apparently they had a couple of Chinese men watching them with hidden cameras while the team was closed training sessions. This happened twice, Denmark complained to Fifa about having been tactically compromised (they went on to lose 2-3 to China on Monday).

Fifa made all the right noises about ‘investigating’ the incident before they got to talk to the two Chinese men. After that, they simply laughed the whole incident off, leaving Denmark in the lurch. I think part of the reason Fifa is so nonchalant about this whole thing is because they know why those men were there (and so do you and I, but let’s not spoil it for the Danes, shall we?). 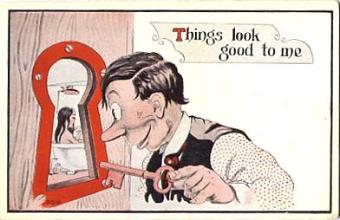 Also, quick question – why doesn’t Reuters have a single person covering the Women’s World Cup? All their contact with the Denmark team and Fifa officials was through telephone and emails. 1 point for technology I guess but shouldn’t they actually be covering this event live?

On a more serious note, if you’re looking for quality coverage of the Women’s World Cup, be sure to check out Kickster.

And the first person who can tell me where I’ve seen the image at the top before gets…well, nothing, but let’s see if you know.