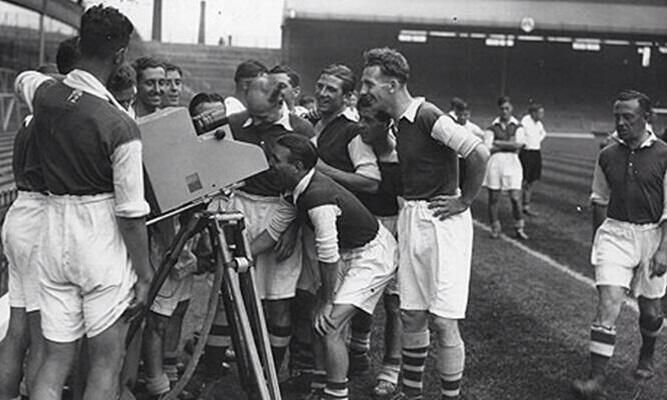 On this day in 1937, the BBC screened its first live coverage of a football match in the United Kingdom.

The BBC’s television service had only begun the previous year. To test the technology for live broadcasting a match between Arsenal and Arsenal Reserves was arranged at the Highbury stadium. It is a travesty that we are still unclear as to who won that match as the broadcast lasted for just fifteen minutes which included an introduction of the team by Arsenal manager Herbert Chapman and coach Tom Whittaker. Let us just make peace with the fact that an Arsenal team won the tie.

This was not the first time that the Gunners were involved in introducing a new broadcasting medium. Back in 1927, their league game against Sheffield Wednesday was the first to appear live on the radio.

On this day in 1992, Leeds United became the first English team to play in the UEFA Champions League. League glory in the previous season meant that Leeds were back in Europe’s premier cup competition after a decade long absence.

The Whites were hammered 3-0 by German club Stuttgart in their first match. They won 4-1 at Elland Road in the return leg but the match was forfeited because Stuttgart had breached the laws of UEFA. Instead of fielding three foreign players, the Germans played with four in the team. The result was scrapped and Leeds were given a 3-0 victory.

A play-off was scheduled at the Nou Camp in Barcelona to decide who would advance to the next round. Leeds won 2-1 and progressed to the next stage to play Scottish club Rangers.

Alas, the end of the road was nigh. Rangers twice beat them 2-1 thus recording a 4-2 aggregate win.