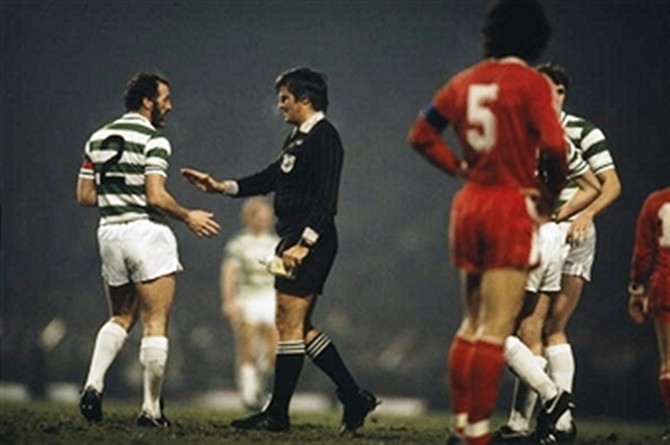 On this day in 1984, Celtic beat Austrian side Rapid Vienna 3-0 at Celtic Park but the result did not count because of some bizarre on-pitch incidents.

The two sides met in the second round of the 1984-85 UEFA Cup Winners Cup. The Austrians won the first leg at the Gerhard Hanappi Stadium in Vienna by 3-1 thanks to goals from Peter Pacult, Leo Lainer and Hans Krankl. Celtic’s consolation came from Brian McClair. The match was not without incident, however. Alan McInally, a 34th minute substitute for Frank McGarvey was sent off in the 73rd minute. Peter Grant was involved in a scuffle that got him accused of stamping on one of the Rapid players. Celtic were later fined by UEFA for their players’ behaviour.

The Parkhead side had their work cut out for the second leg. But Brian McClair and Murdo MacLeod scored in the first half to bring the two clubs level on aggregate. Tommy Burns added another goal in the 68th minute to put Celtic 4-3 ahead.  Then something absurd happened.

A bottle was thrown on to the pitch which, according to your eyewitness, landed either 5 feet or 50 metres away from Rapid keeper Herbert Feurer. The former Austrian international promptly collapsed on the pitch and had to be taken off. Club captain Hans Krankl tried to lead the team off the pitch in an attempt to force an abandonment of the match. But the game continued nevertheless and Celtic won 4-3 on aggregate.

Rapid were furious, however, and forced UEFA to intervene. The European football’s governing body established a panel to investigate further. They finally reached to a conclusion where Celtic had to replay the match. No appeals from the Hoops were entertained and they were forced to play the second leg again in a neutral venue. Manchester United’s Old Trafford stadium hosted the second leg which Rapid won 1-0 and qualified to the next round 4-1 on aggregate.

Surrealism in the Premier League

Newcastle United were up against AFC Bournemouth while Norwich City played Swansea City. The Northerners and the Easterners both won by 1-0. If you are not familiar with the geography of the United Kingdom then please refer to a map. Thank you.