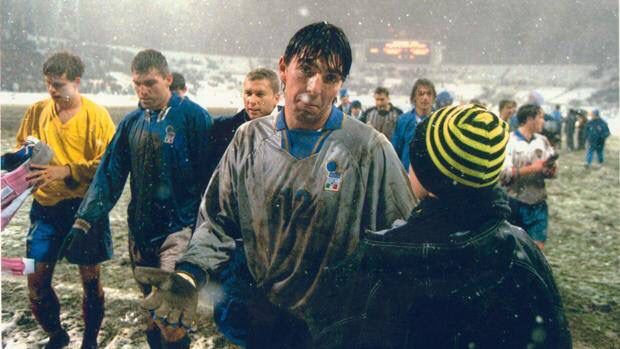 On this day in 1997, Parma’s 19-year-old goalkeeper Gianlugi Buffon debuted for the Italian national team in a 1998 FIFA World Cup play-off against Russia. The rest as they say, is history.

Buffon was brought in by Cesare Maldini as a replacement for the injured Inter Milan custodian Gianluca Pagliuca for the first leg. Aged just 19 years and nine months, ‘Gigi’ became the youngest goalkeeper to feature for Italy since World War II.

The young keeper could not have hoped for a more crucial game to make his debut. Played under harsh, snowy conditions at the Dynamo Stadium in Moscow, Buffon made a number of decent saves to protect Christian Vieri’s opener in the 49th minute. But a Fabio Cannavaro own goal minutes later ended the game at 1-1. Italy won the second leg  in Naples and qualified for the World Cup thanks to a goal from Lazio’s Pierluigi Casiraghi.

Buffon has since then gone on to make over 170 appearances for the Italian national team, making him the highest capped player in Azzurri history.

On this day in 1975, England played Czechoslovakia in a UEFA Euro 1976 qualifier at the Tehelné pole Stadium in Bratislava. The match was abandoned after just 17 minutes due to dense fog.

A replay was scheduled the next day which England predictably lost 2-1. The Three Lions were top of the group while Czechoslovakia were second but had a game in hand. The 2-1 loss was England’s first defeat under manager Don Revie.

Czechoslovakia went on to qualify for the Euro after finishing a point ahead of England in the final standings. Not wanting to stop there, they also won the 1976 Euro by beating West Germany in the final. The match is particularly remembered for Antonin Panenka dispatching history’s first ‘Panenka’ in the penalty shootout victory.