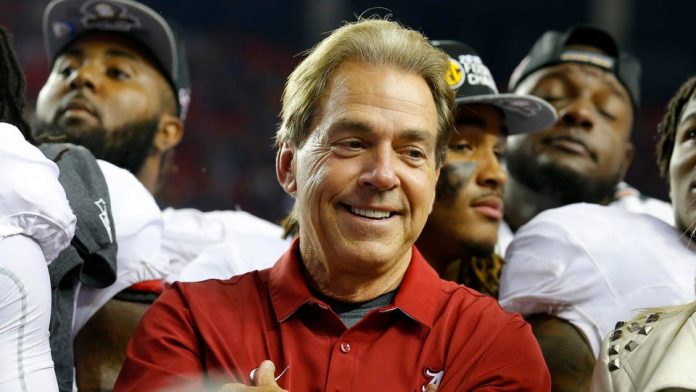 Being a college coach at a high-profile school comes with a lot of pressure, but it certainly has its benefits. You become a mentor to young men and sometimes you help them achieve their dream and further their careers. Oh yeah, and you also earn A LOT of money, just ask the likes of Nick Saban and Kirby Smart.

Alabama’s Nick Saban recently signed a contract extension keeping him at the school for another seven years. It should come as no surprise that the Crimson Tide wanted to keep him sweet. In his 16 years there he has eight SEC championships and six national championships. Our favorite SabanStat (that’s what we call them here) is that Alabama have been ranked #1 in the AP Poll at some point every season since 2008.

Alright, down to the nitty gritty. In 2022, Nick Saban stands to earn $10.7 million. This doesn’t include bonuses or incentives. He was only set to earn $9.9 million this year prior to the extension. We are not sure how they expected him to survive on that.

Clemson head coach, Dabo Swinney recently signed his extension making him the second-highest paid college coach. Swinney who has been head ball coach at Clemson since 2008 has won two national championships with the college.

His ten-year deal will keep him with the Tigers until at least 2031. Dabo is famous for once saying if college students ever got paid to play sports he would quit. Even with NIL deals becoming commonplace he is somehow still collecting his paycheck.

Kirby Smart became Georgia head coach in 2016. Since joining the Bulldogs have a 67-15 record and Smart brought home their first national championship since 1980 when they won it last year.

His teams are renowned for a fierce defense, something Smart likely mastered as a defensive coordinator under our number one guy on the list, Nick Saban.

Lincoln Riley recently moved out west to coach the USC Trojans. Not only does he now get to enjoy sun and sand as opposed to the drudgery of Oklahoma but he can also bathe in cash. The Trojans are reportedly paying Riley $10m in 2022, the first year of his new contract.

In addition to the salary, USC also made sure they got their man by adding some other financial and special incentives to Riley’s contract. They bought both his Oklahoma homes for more than $500,000 above asking price, bought his LA house, reportedly worth $6 million and he has unlimited use of the team’s private jet. Tough life, eh?

Brian Kelly joined LSU this off-season and famously instantly became a southerner with his new accent. Kelly was lured away from his role at Notre Dame for the price of $9.5 million a year. Kelly signed a ten-year contract with the Tigers.

Kelly’s contract is thought to have a clause where if he is fired without cause, LSU will still owe 90% of his salary, this increases to 100% of his salary if he wins a national championship while at the school.

It seems that learning some ‘x’s and o’s’ has paid off handsomely for some of the top coaches in the college game. I am now going to hop in my time machine and teach my four-year-old self how to counter a blitz.