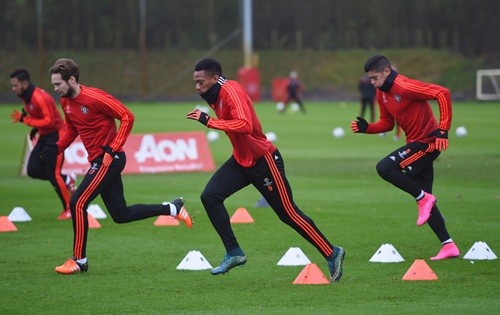 The France teenager picked up an injury while on international duty and he missed the Red Devils’ 2-1 victory over Watford, along with Marouane Fellaini and Wayne Rooney. The latter was ill, which forced him to miss the trip to Vicarage Road.

“I’m very happy to tell you that [they can return], more or less, because you never know as they haven’t trained so much this week and also before this week, Rooney is recovered and Martial can play. Fellaini can play. So that’s great news, I think,” Van Gaal told MUTV.

Louis van Gaal tells #MUTV that Rooney, Martial and Fellaini are fit to face PSV but Herrera and Jones miss out. #mufc

In the weekend fixture, United saw two new causality as midfielder Ander Herrera and defender Phil Jones picked up injuries. In addition to this, young striker James Wilson was not included in the squad due to a swollen knee.

Herrera and the former Blackburn Rovers central defender will not be featuring against the Dutch side, while Bastian Schweinsteiger was not seen during today’s training as he was given a day off.

The German international and Wilson could feature when United host PSV in the European competition this midweek.

Van Gaal on @BSchweinsteiger's absence from training: "He needed a recovery day but that doesn't mean he can't play [against PSV]." #mufc

“Jones and Herrera cannot play. It’s too soon because they also need recovery time. So I have five injured players,” United manager added.

United suffered a 2-1 defeat at the hands of PSV at the Philips Stadion, in which Memphis Depay opened the scoring on his return to his former club. The result was disappointing for the English giants, but they suffered a massive blow as a horror tackle on Luke Shaw saw him leave the field on the stretcher with a broken leg.

The England left-back is expected to miss most part of this season as he recovers from his injury.