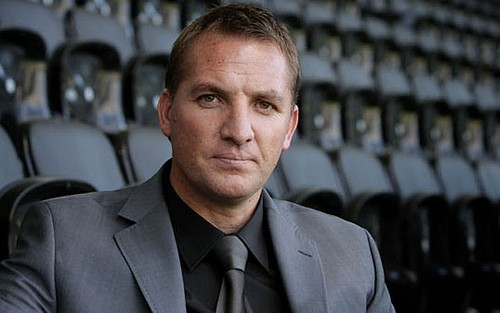 Liverpool have today confirmed that Brendan Rodgers will become their new manager for 2012-13, joining the club from Premier League rivals Swansea.

The Anfield outfit have been in the market for a new head coach after owners Fenway Sports Group dismissed Kenny Dalglish following a disappointing eighth placed finish in 2011-12.

Rodgers, who led Swansea to the English top flight for the first time in their history, has signed a three-year contract on Merseyside, and has admitted that the opportunity to join the Reds was too good to turn down.

“I’m blessed to be given this opportunity,” he confessed.

” I want to thank John Henry, Tom Werner and FSG for the opportunity to manage such a great club.  I’m really excited and I can’t wait to get started on this incredible project going forward.  I promise to dedicate my life to fight for this club and defend the great principles of Liverpool Football Club on and off the field.”

Swansea exceeded expectations last term, playing an attractive and attacking style of football that won the hearts of onlookers throughout the season, and ensuring a comfortable mid-table finish. Victories over Manchester City, Arsenal and Liverpool in particular stand out in the memory, and the Reds are hoping that Rodgers can bring these qualities to Anfield.

“Brendan’s comprehensive football philosophy is perfectly aligned with those at the club and those soon to join the club.  He was the first choice unanimously among them and he had no hesitation at all in embracing exactly what we want to try to build at Liverpool,” John Henry stated.

Wigan’s Roberto Martinez was initially pigeon-holed as the frontrunner for the role, however FSG have opted for the Northern Irishman after whirlwind negotiations, and a compensation package has been paid out to the Liberty Stadium side.

Rodgers is expected to have a director of football to work alongside, with Dutchman Louis van Gaal widely expected to be unveiled in the role in the near future. This will be one of the new manager’s main challenges in his new position, as although this format seemingly works well on the continent, the power-sharing system has not yet made the successful transition to English football.

Although the Merseysiders did win the Carling Cup and make it to the final of the FA Cup last season, a strong Premier League campaign is expected in 2012-13, and will be the litmus test upon which Rodgers is judged. With the Manchester clubs perennial table-toppers, Arsenal and Chelsea bolstering their squads in the summer and Newcastle and Tottenham dangerous and improving, the Reds have extreme competition to make it back into English football’s elite.

Rodgers will be given money to spend this summer, and inherits a squad that has had significant investment in recent times. Liverpool fans will hope that key men Steven Gerrard and Luis Suarez will remain fit for the bulk of next term, whilst the likes of Andy Carroll, Stewart Downing and Jordan Henderson will need to improve if the club is to challenge for the top four.

With Carroll out-of-form for the bulk of last term and Dirk Kuyt starting to feel his age, Liverpool lacked a clinical edge in attack and over-relied on Suarez for goals. A recognised marksman is needed at the club to deliver consistently and share the scoring burden with the Uruguay international. Home form, especially against the lesser lights of the division, was also very average last term, and Rodgers will be charged with regaining Anfield’s fortress reputation.

The Liverpool job must be viewed as one of the most challenging positions in the Premier League, given the weight of expectation from the owners and fans, and the fact that the playing squad have a number of issues to iron out. Club legend King Kenny could not convince FSG that he was the man to take the team forward, and Rodgers has now taken a big step up in terms of responsibility after his Swansea heroics.