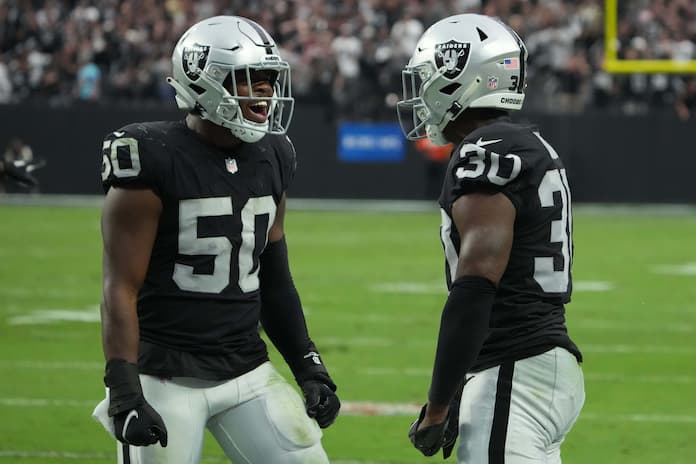 The Las Vegas Raiders are a disappointing 0-3 at the start of the new NFL season, and the history books don’t favour their start.

On NFL Sunday, the Raiders fell to another defeat as they faced the Titans. The 24-22 defeat means that it’s three straight defeats for the Las Vegas team.

In only their third season in Las Vegas since the franchise relocated from Oakland, they’ve not given the Raiders fans much to cheer about early on.

The Raiders will feel they’ve given themselves as much chance as possible to win their opening games. They’ve lost 24-19, 29-23 and 24-22 against the Chargers, Cardinals and Titans respectively.

What Have The Raiders Players and Staff Said About Being 0-3?

Wide receiver Devante Adams, who made the big money move from Green Bay, was clearly angry:

“I am frustrated and angry. I expect more.

“It’s not easy to win in this league, we know that … but we expect more and we’ll do better as we move forward.”

How Will Their Start Affect Their Postseason Chances?

A 0-3 start isn’t ideal for a team, and even though teams in the past have turned it around, it’s a hard task.

Since the NFL merger, only seven teams have managed to make the postseason after starting 0-3.

The Las Vegas Raiders are the only 0-3 team left in the NFL.

Historically only seven teams since the NFL merger have made the postseason after an 0-3 start.https://t.co/sutt8ygOvA pic.twitter.com/wwuOnnmFrL

Reaction To The Raiders’ Poor Start

The Raiders haven’t received much sympathy on social media for their poor start.

Here are a few that caught our eye:

Davante Adams after starting 0-3 with the Las Vegas Raiders
pic.twitter.com/6lEDh1fzBX

I’ll see myself out. #NFL #dadjoke

Las Vegas Raiders started the season 0-3 and the next two games are against Broncos and Chiefs 😬 pic.twitter.com/Mqq9KqN3lX

Raiders are down 14-3 early in the second quarter. Las Vegas has no chance competing in the AFC West if they drop to 0-3.

There is 0 excuses for why the Las Vegas Raiders are 0-3.

They’ve got a chance to turn around their fortunes on Sunday as they face on the Broncos who are 2-1 so far this season. It won’t be an easy task for them again, but they need to break their losing streak sooner rather than later.