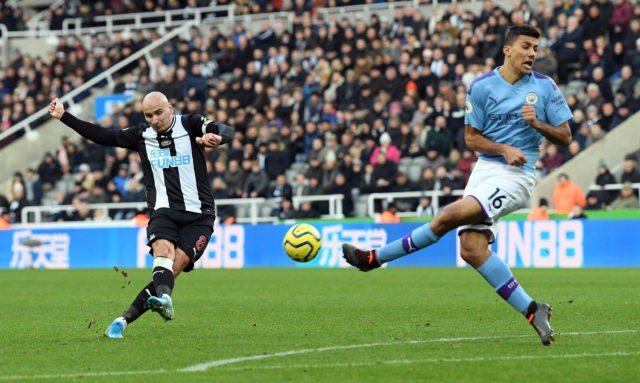 The 28-year-old has been impressive for Steve Bruce’s side this season and the former Leeds player thinks he could improve further if he plays alongside better players.

Giles claims that Guardiola should sign Shelvey because the midfielder is up there with the best players and he is as good as anyone in the Premier League when he is on form.

He said (quotes via Chronicle): “It would be a gamble, but if I was Guardiola, I’d be very tempted to go for him.

“He has the skill, he can pick a pass, he can distribute it, he’s a well-gifted lad and he might be at an age now with the right manager, in the right team – he’d be as good as he’d promised to be years ago.

“I think he’d be made for Guardiola because he’d be playing with top-class players. I think he’d have the respect for Guardiola and, at 28, he’d know this is the last chance. It would be a gamble, but I don’t think you’d have to pay that much for him.

“This guy, when he’s playing, he’s up there with the best, but particularly now, he is as good as there is in the Premier League.”

There is no doubt that Shelvey can be a top-class passer on his day but he is inconsistent. In order to play for clubs like Manchester City, he will have to sort out his consistency and his mentality.

City are used to challenging for trophies every season and they need players who can deliver top performances every week.

Shelvey is an enigmatic player and he might struggle to produce on a constant basis.

Furthermore, Guardiola has players like Gundogan, De Bruyne, Silva and Foden at his disposal. It would be highly unlikely to see Shelvey starting in their midfield even if he joined them.

Also, Newcastle value the player’s contributions and they are unlikely to sell him anytime soon.