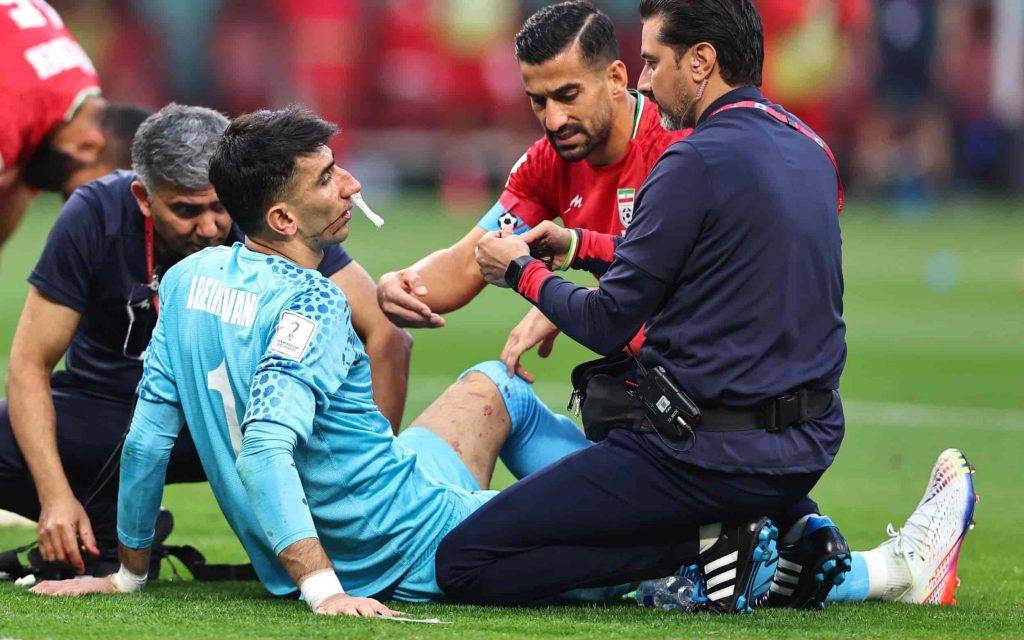 Iran goalkeeper Alireza Beiranvand had to exit the field after 20 minutes against England in their opening Group B clash following a clash of heads with his own player.

With a full 14 minutes of added time at the end of the first half, the on-field medical team took time to assess the Persepolis keeper who looked uneasy on his feet.

With a bleeding nose, it looked certain that he would exit the field but following some 10 minutes of stoppages, the Iran staff allowed him to continue. However, he then sat on the floor and signalled to the bench he was unable to continue, prompting fans watching the match to question the World Cup concussion protocols.

What Are the Concussion Protocols at This Year’s World Cup?

Teams are awarded five substitutions per game as standard for the World Cup, but are also permitted to make a permanent substitute for players with suspected concussions that doesn’t affect their normal allowance.

This has already been the case in the Premier League since last year.

Iran's goalkeeper went down after clashing heads w/teammate. Cleared, only to lay down minutes later & beg for a sub.#WorldCup is off to a disastrous start on #concussion management.
Sets an example that puts 10's of millions of global youth players at risk.
Shameful. pic.twitter.com/o9BcyUG4Kb

The FIFA website outlines some added protocols, stating: “For the first time at a FIFA World Cup, an independent Concussion Assessment and Rehabilitation Service will be offered in Qatar to provide an evidence-based assessment of any player who has suffered a brain injury, including recommendations from concussion experts regarding the player’s return to play.”

It also goes on to state that; “If there are signs or symptoms of damage to the brain, or a concussive injury is suspected despite the absence of signs or symptoms, the doctor/therapist should remove the player from the pitch for a more detailed examination(using a concussion substitute if available/required).”

This goes against the protocol enacted by Iran, who failed to remove their goalkeeper from the field of play for 15 minutes before letting him continue, albeit for just another two minutes before he was unable to play.

Beiranvand, the injured goalkeeper, may be withdrawn from the tournament with concussion protocols stating that a player should have 10 days without playing before they can be next in line to feature again.