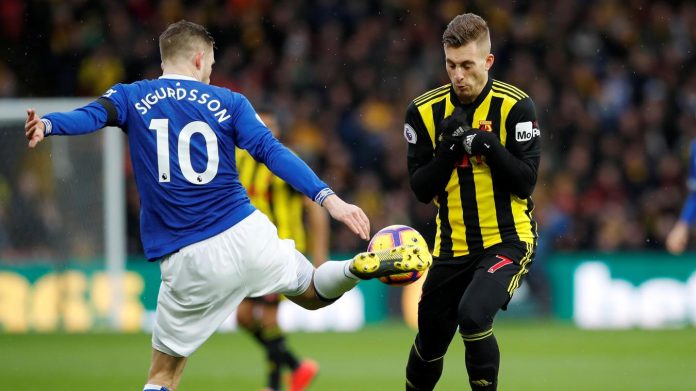 Everton crashed to a 1-0 defeat against Watford earlier today.

Andre Gray scored the only goal of the game for the home side on the 65th minute.

Everton came close to scoring the equaliser when Lucas Digne hit the crossbar with his freekick.

Marco Silva will be very disappointed to have come away with a defeat on his return to Vicarage Road. The Toffees are under enormous pressure now after losing three games in a row.

The Everton boss was heavily backed in the summer window but he has failed to show any improvement so far.

It will be interesting to see if the Blues can turn it around and finish the season strongly now.

Everton fans won’t be pleased with the performances of their players today. Creative players like Gylfi Sigurdsson failed to fashion out chances for the likes of Tosun and Richarlison.

The £150,000-a-week midfielder has looked out of form for a while now and Silva needs to seriously consider dropping him.

Here are some of the fan reactions to his performance against Watford earlier.

Sigurdsson with another anonymous performance. Should’ve been the first one hooked.,

Sigurdsson doesn’t create anything and the final 3rd is poor, Tommy D bossing the midfield #EFC

Sigurdsson when we get possession pic.twitter.com/1KQFdvVgnV

Need to convince Swansea to take Sigurdsson back