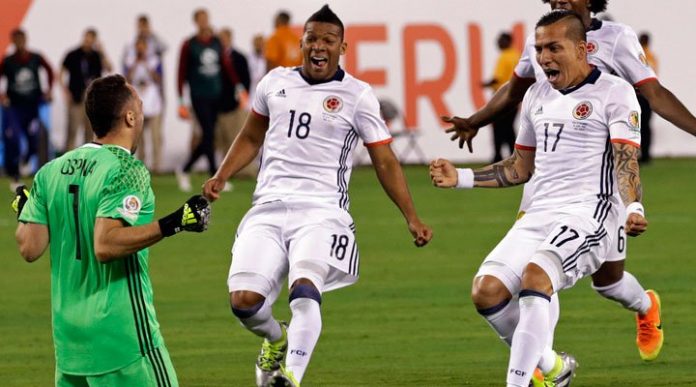 Colombia advance to the semi-finals of the Copa America Centenario at East Rutherford on Friday after beating Peru on penalties.

Arsenal goalkeeper David Ospina pulled off a stunning save deep into injury time to deny Peru a golden chance to wrap up the game before saving a spot-kick to earn a nail-biting win for Colombia.

It was a hugely frustrating quarter-final played in front of 79,194 fans at East Rutherford’s MetLife Stadium after both teams finished 0-0 after 90 minutes.

It wasn’t an eye-catchy game with both teams failed to build a momentum due to stop-start nature of the contest. As many as 11 fouls were committed in the opening 20 minutes, a clear ploy from Peru to stop Colombia from exerting their free-flowing style.

It took more than 20 minutes for Colombia to create a genuine opening when Real Madrid superstar James Rodriguez hit a curling low shot from 20 yards out. It was a great attempt that cannoned back across the goal; Carlos Bacca tried to pounce it on the rebound but his shot went wide.

After the break, the physical battle continued; Renato Tapia fortunate to have not conceded a penalty after fouling on Bacca they went unpunished.

In the 63rd minute of the game, Tapia was booked for a wild challenge on Rodriguez. Cristian Zapata and Farid Diaz, both picked up yellow cards, as Colombia were left frustrated for not being able to exert their natural style of play.

Peru almost sealed the victory deep into injury time when Christian Ramos headed powerfully towards goal but Ospina was equal to the challenge and tipped it over the bar without harming the scoreline.

In the penalty shoot-out, the tide turned into Colombia’s favour, where Trauco’s effort was blocked by Ospina. Earlier Colombia had drilled their first three penalties.

Sebastian Perez stepped up to make 4-2, and when Peru’s Christian Cueva blasted his spot-kick over the bar, Colombian players rejoiced after sealing the semifinal berth.