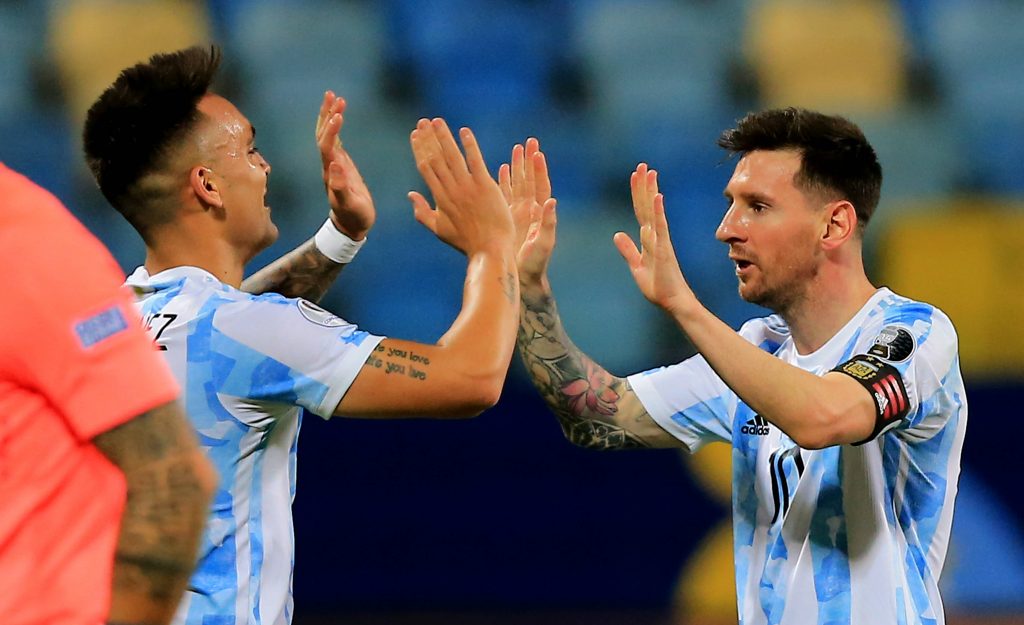 Estadio Nacional de Brasilia Mane Garrincha is the venue as Argentina and Colombia battle it out for a place in the Copa America 2021 final on Wednesday.

Encouraged by a string of impressive displays at the tournament, Argentina enter this clash as favourites to reach their first Copa America final since 2016.

Meanwhile, Colombia will have to step up their performances if they want to overcome outsider status and end a run of four matches without a win in regulation time.

Argentina stormed past out-of-sorts Ecuador in the quarter-finals on the back of Lionel Messi’s heroics, with the six-time Ballon d’Or winner taking part in all three strikes during an overwhelming 3-0 triumph.

After being held to a 1-1 draw to Chile in the Copa America 2021 curtain-raiser, the Argentineans have won their subsequent four matches by an aggregate score of 9-1.

Notably, La Albiceleste have won the first half ‘to nil’ in each of their five Copa America 2021 fixtures, breaking the deadlock within the opening 15 minutes in three of the last four.

Lionel Scaloni’s men are now unbeaten in their last 18 international outings in a row (W11, D7) and have yet to lose to Colombia’s current boss Reinaldo Rueda (W3, D5).

After scoring in back-to-back Copa America matches, Inter Milan forward Lautaro Martinez is likely to keep Messi company in the attack at the expense of Sergio Aguero.

Meanwhile, the 34-year-old seems to be on the verge of claiming the Golden Boot after bagging four goals and four assists in five Copa America appearances this summer.

Messi is desperate to win his first international title with Argentina and will be keen to upset Colombia after drawing a blank in his last two meetings with this opposition.

Despite reaching the semi-finals, goal-shy Colombia have performed well below their standards at the Copa America 2021, with a narrow 1-0 win over Ecuador on Matchday 1 remaining their solitary success in five games within regulation time.

Following back-to-back 2-1 defeats to Brazil and Peru to close the group stages, the Colombians ousted Uruguay in a keenly-contested quarter-final encounter via penalties.

Since they drew a blank across 120 minutes of play last time out, Rueda’s players have now scored under 1.5 goals in five consecutive internationals, totalling just three strikes in that time.

Los Cafeteros defied underdog status to squeeze past Uruguay as they hope to qualify for a first major final since winning the Copa America 2001.

Duvan Zapata, who has yet to score in this tournament edition, will be crucial to Colombia’s hopes of overcoming Argentina.

But the Atalanta marksman has scored just four goals in 23 international appearances, though one of those strikes came against this opposition.

Yerry Mina and Davinson Sanchez forged a stronghold in front of David Ospina’s goal in the quarter-finals and will need to stay equally compact against Messi and co.

After missing out on the opening Copa America 2021 fixture, the Tottenham centre-back reclaimed his place in the starting XI alongside the Everton star.

The Premier League duo will play a key role in Colombia’s efforts to keep Argentina at bay after contributing to three clean sheets in their last five starts for the national team.

The Colombians have faced Argentina in two of their last three Copa America semi-final appearances, losing each tie, including a 3-0 defeat in the most recent one back in 2004.

With that said, Colombia cruised to a 2-0 H2H victory in the Copa America 2019 group stages, with Zapata hammering the final nail in Argentina’s coffin that time.

In fact, Los Cafeteros have gone unbeaten in three consecutive meetings with this opposition (W2, D1) since going down 3-0 in a World Cup qualifier in November 2016.