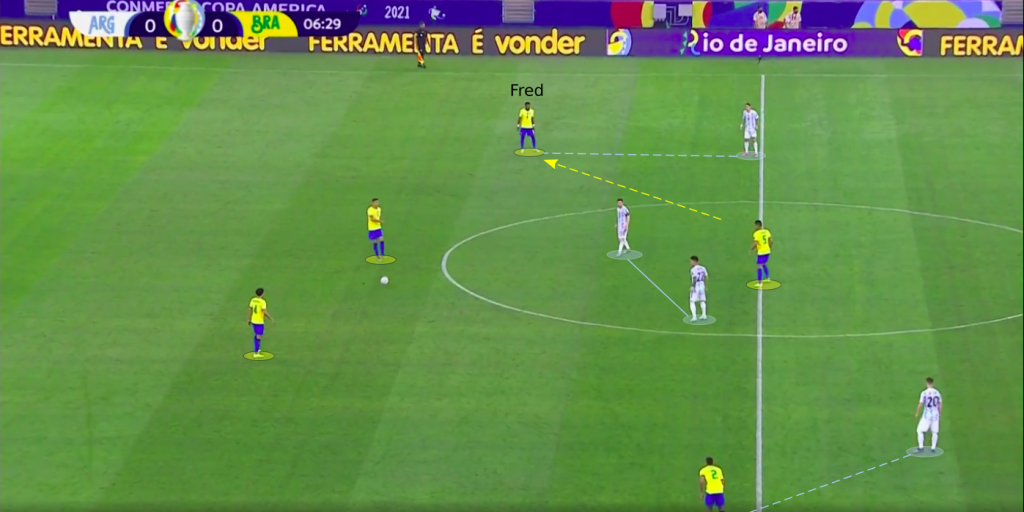 After 27 matches of enthralling South American football, we reached the final of the 2021 Copa América, where Brazil and Argentina were set to do battle.

The Seleção were the defending champions, and with an unbeaten record to this stage involving just one draw, they certainly were the team to beat.

By contrast, Argentina had the chance to become the joint-most successful side in the competition’s history with a 15th title, but it would be the first since 1993 as Lionel Messi had never won a major international trophy for his country.

An intense battle ensued, with crunching challenges and utterly disgusting fouls flying everywhere, but in the end, Argentina triumphed thanks to the only goal of the match.

The standard of football on show was not particularly high for the aforementioned reason, but that is not to say that there was nothing to look at tactically, so let us take a closer look at the match by focusing on how Lionel Scaloni’s side kept Brazil at bay for so long.

Brazil saw just under 60% of possession in this match, so Argentina had the most defensive work, but they did it incredibly well with an impeccable plan out of possession that was executed brilliantly in their 4-4-2 shape.

Against goal-kicks, their primary objective was to restrict Brazil from progressing centrally, which is why the front-two looked to cover-shadow Brazil’s midfield pivot.

As Brazil got further forward, their build-up shape changed, with Renan Lodi freed to get forward and Fred taking up his place on the left.

Ángel Di María did not track Lodi, staying close to Fred while Giovani Lo Celso did so to Danilo on the other side, leaving the front two to block off the central areas once again.

With Fred moving out wide in this manner, the Seleção’s midfield was left very thin, but it did also create a fair amount of space in that region.

The first (and most obvious) way to use this was through the only remaining central midfielder Casemiro, who would push slightly forward to open up passing angle for the backline.

Argentina had a rather simple solution – send Lautaro Martínez back to man-mark him. 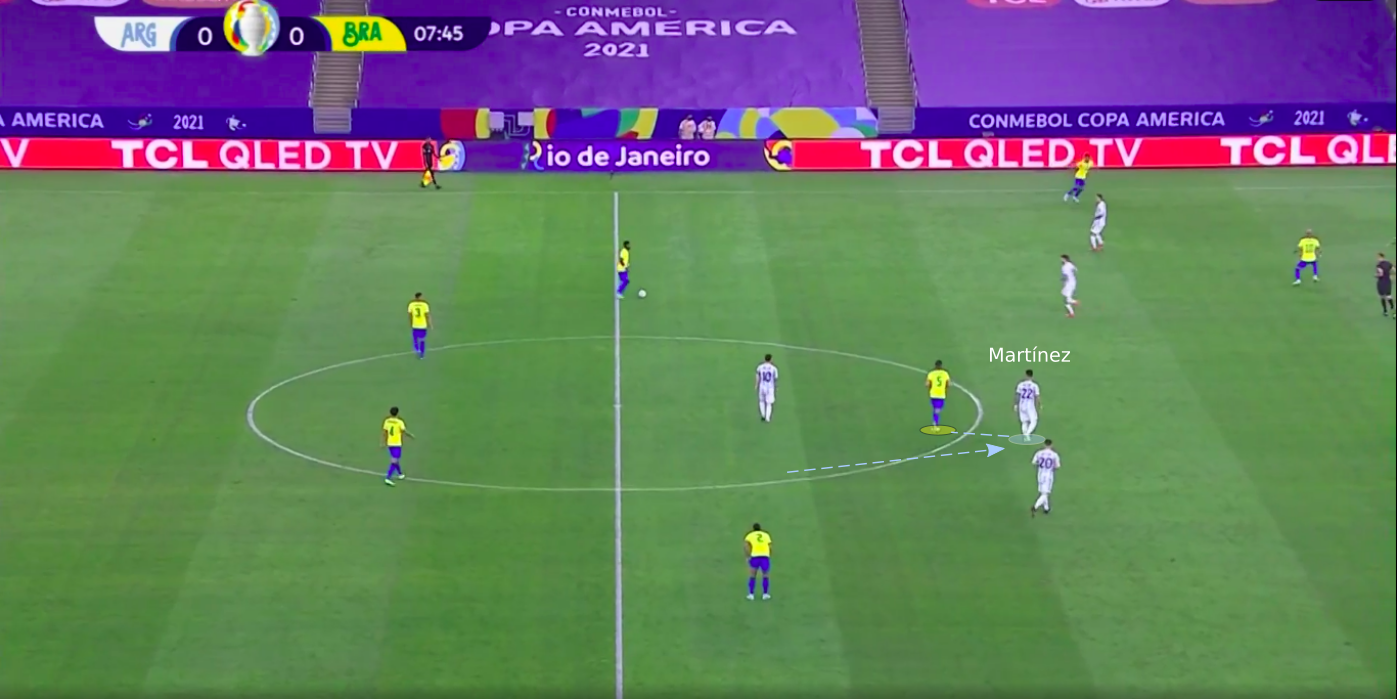 The other (and more prevalent) manner in which Brazil looked to exploit this space was through Neymar and Lucas Paquetá, who occupied either half-space.

This is where Rodrigo De Paul and Leandro Paredes had major jobs to do, as they had to mark the two Brazilian dangermen. 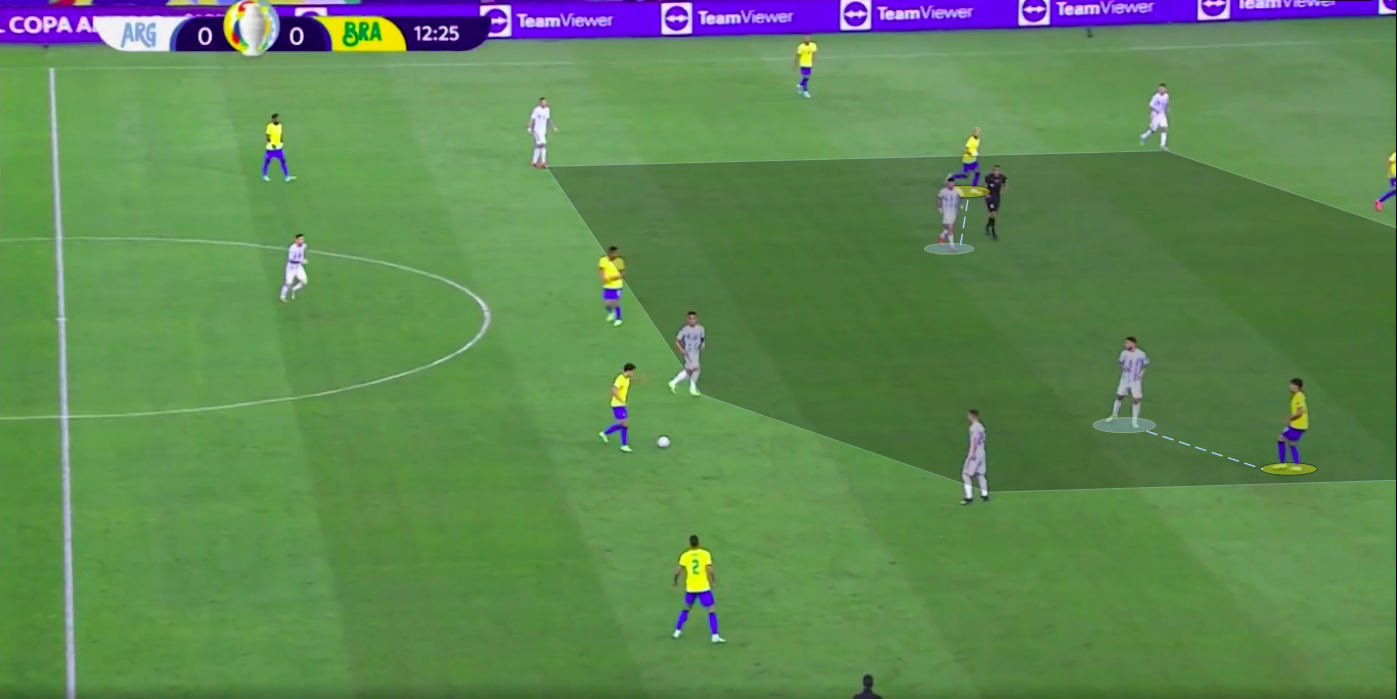 The anti-Neymar tactic was quite simple – swarm him whenever he got the ball and if necessary, bring him down, which is why four of Argentina’s five yellow cards came for fouls on Neymar.

The final option for Brazil was to go long, but the visitors maintained a fairly low defensive line and had Cristian Romero and Nicolás Otamendi (both of whom put in great performances) in central defence, so aerial balls would not have worked well at all.

De Paul had a great game in possession as he set up the goal (which we will take a look at soon) and very often got Argentina out of their own half, but he was arguably the most important player in defence as his role involved shuttling across to meet the advancing Lodi while Nahuel Molina looked to mark Neymar.

This sort of switch of defensive responsibilities could have proved disastrous had it gone wrong, but Brazil did not really probe it enough and it held up alright on the few occasions it was called into question.

The Seleção were restricted to just two shots on target thanks to Argentina’s solid defensive approach, and on both occasions, Emiliano Martínez delivered the goods to preserve the clean sheet.

Apart from the goal, Argentina posed a very minute threat to Brazil’s defence with just five other shots (two of which were blocked and three from outside the box).

It was just one mistake on the hosts’ part that cost them the trophy, so it was quite a big one.

It all started with Neymar getting surrounded by three opponents and losing the ball, which is not something he should be blamed for. 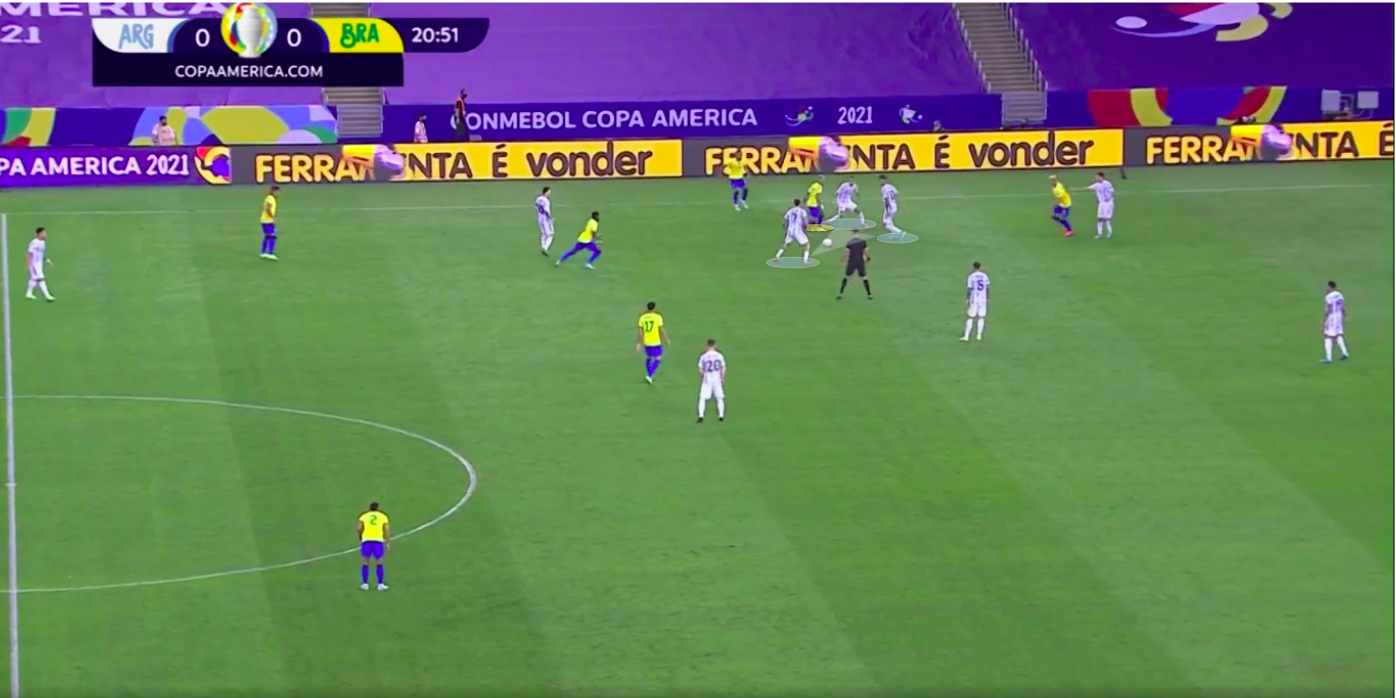 Brazil were defending in a 4-4-2 to deny central progression, but their defensive line was relatively higher.

This meant that they would always need to apply some amount of pressure on the man in possession to prevent him from having the time to pick a long ball, but that was the opposite of what Neymar was doing here as he trundled about for 13 seconds after being dispossessed and let De Paul have all this space to himself. 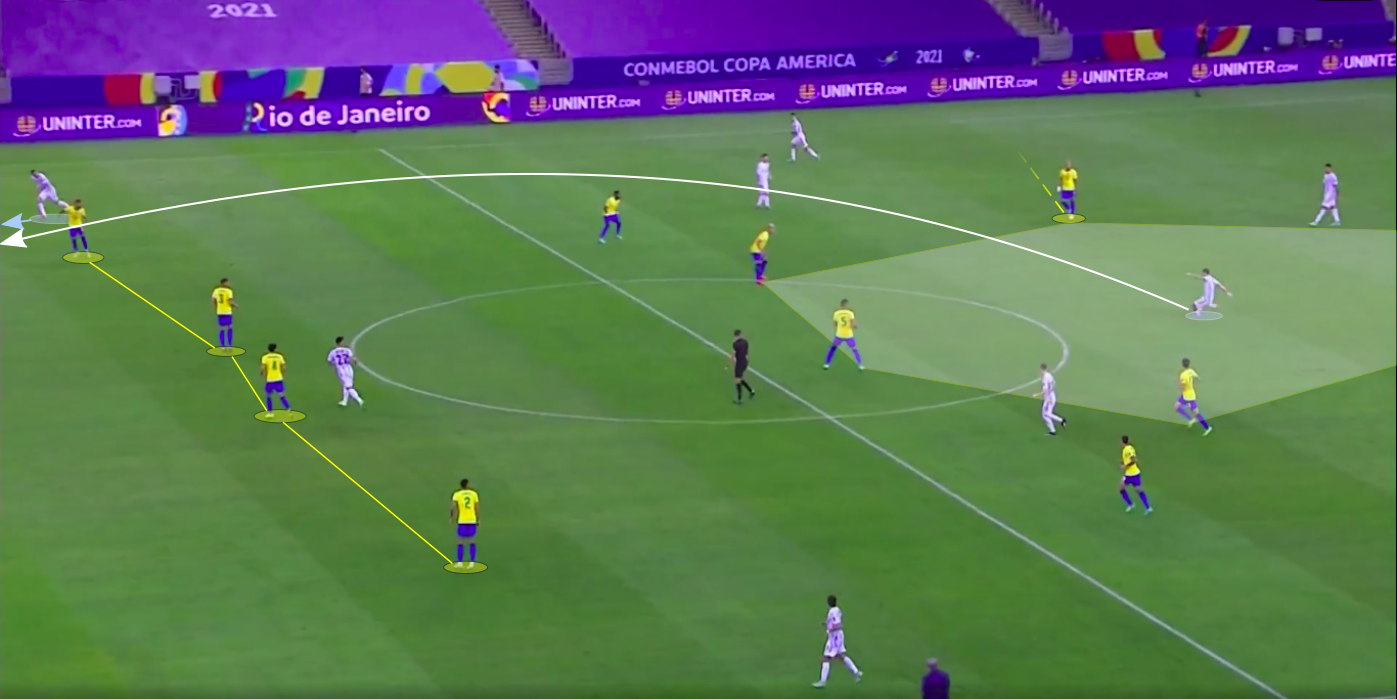 Lodi’s defending wasn’t excusable either, and just as we have seen on numerous occasions in the past, including the Champions League final, Ederson got caught in no man’s land in a one-on-one, allowing Di María to chip him with ease. 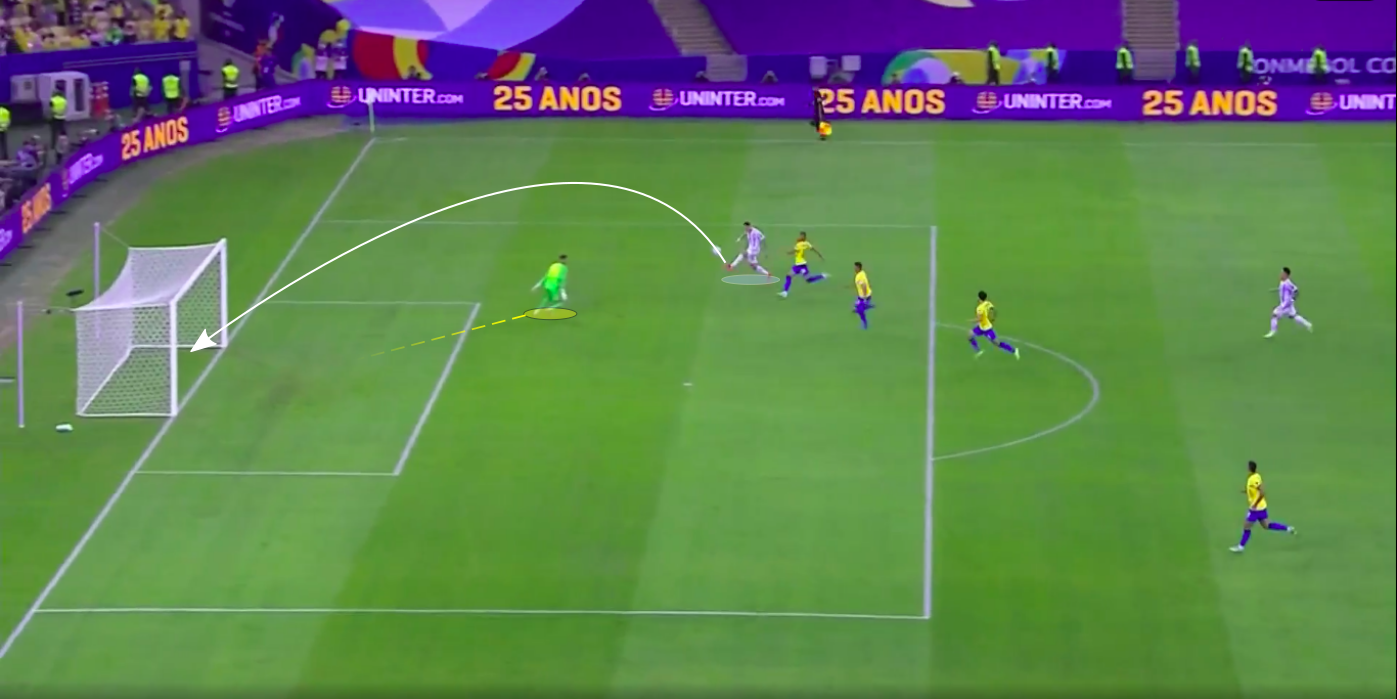 This match was a testament to the fact that a tactically astute international manager can prove to be just as important as a host of star players.

Brazil had more quality on the pitch, but Scaloni’s smart tactical decisions and Tite’s failure to adapt or find a solution proved to be the difference.

Situationally, one bit of laziness from Neymar (and subsequent errors from a couple of his teammates) proved costly, while Argentina defended in unison throughout the match, with even Messi attempting five tackles.

Football is a sport of fine margins, and this was the difference here.