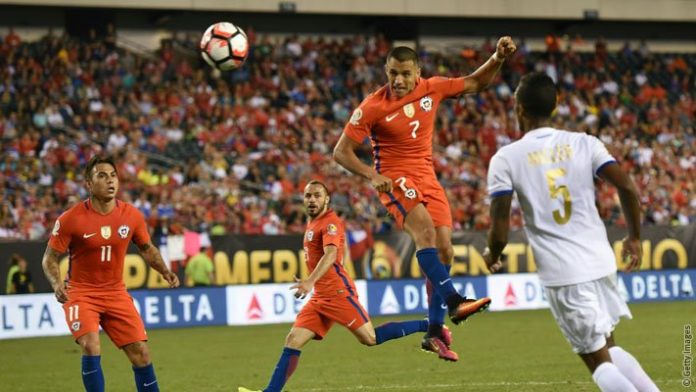 It was a do-or-die match for both the teams. Both the teams needed three points to progress to the quarter-finals. As a result, we saw an incredibly open game, with both the teams looking to outscore each other on Tuesday night in Philadelphia.

Panama started brightly and took the lead in the 5th minute through Miguel Camargo with a long-range effort from the right. It should have been a routine save for any top goalkeeper but Claudio Bravo on this occasion couldn’t judge the bounce and swerve on the ball and allowed the ball to skip through.

Chile quickly responded and hit back to level the score 1-1. Arsenal star Alexis Sanchez played a nice one-two, and got free in the Panama penalty area, his well struck shot was parried away by Jaime Penedo but fell into the path of Eduardo Vargas who tapped home.

Arturo Vidal got a golden opportunity to increase the lead – his looping header inside the box was superbly saved by the Panama goalkeeper. Chile constantly troubled Panama with crosses from the left; moments later, Vidal attempted another header on goal but couldn’t hit the target.

Chile finally took the lead for the first time in the match on the stroke of halftime, and once again, it’s a cross from the left-hand side that created an opening: Vargas scored his second of the night, after heading home a pinpoint cross from Jean Beausejour.

After the break, Chile took the lead again. Alexis Sanchez scored his first goal of the tournament after slotting home with an excellent volley in the 50th minute, with Edu Vargas turning into a creator this time.

Panama looking to come back strongly in the match enjoyed a good spell in the middle, creating at least 3-4 very good chances, but lacked the finishing touch to hurt their opponent.

Hernan Darío Gomez’s side finally pulled one back when Bravo misplayed a headed effort from Abdiel Arroyo, with 15 minutes left to play.

With only two minutes left from the normal time, Chile put the final nail in the coffin and took the game away from Panama’s reach when Alexis Sanchez placed his header beyond the out-stretched arms of the Panama custodian.

Chile will face Group B winners Mexico in the quarterfinals on Saturday, June 18. Panama were eliminated from the group. Check the highlights below: