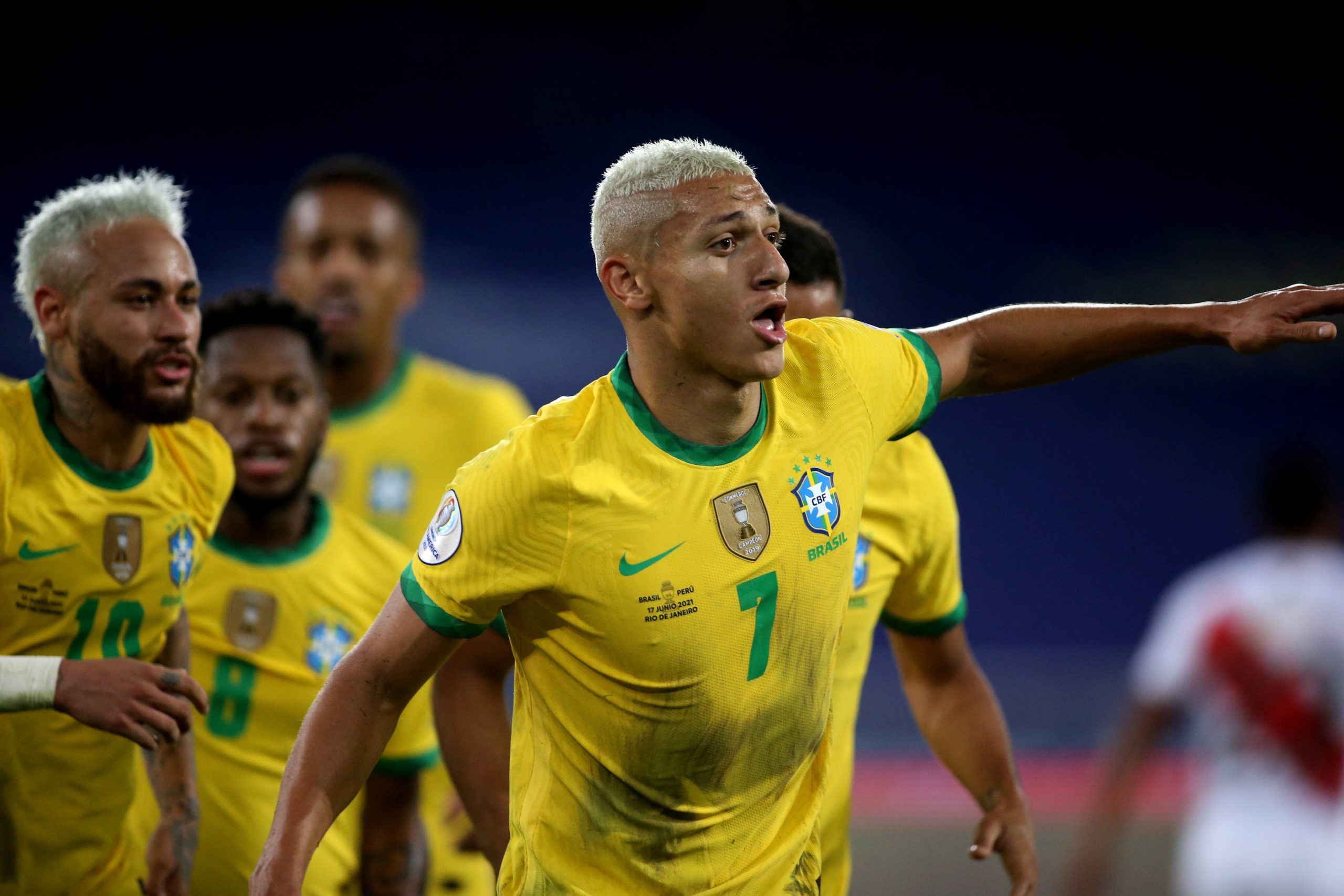 Brazil’s imperious Copa America 2021 charge continues on Thursday as they take on out-of-sorts Colombia at the Estadio Olimpico Nilton Santos.

Saying the Brazilians have impressed at the tournament would be an understatement, given their +7 goal difference from their opening two Group B matches are off the charts.

Meanwhile, Colombia will surpass Brazil in the standings with a win here despite enduring a torrid Copa America 2021 campaign so far.

Reigning Copa America champions Brazil have become the first nation to qualify for the 2021 knockout stage following a perfect start to their Group B campaign.

After dismantling COVID-hit Venezuela 3-0 in their Copa America 2021 opener, the Brazilians put four unanswered goals past Peru to claim a place in the quarter-finals.

Despite getting off the mark within 23 minutes in each of their Group B fixtures, Tite’s men have recorded five of their seven Copa America 2021 goals beyond the 60th minute.

The Selecao take the field in the midst of a purple patch, having won their last nine international games in a row, eight of which saw them prevail by a 2+ goal margin.

Paris Saint-Germain superstar Neymar has inspired both of Brazil’s group stage wins, getting on the scoresheet on each occasion to take his Copa America tally to five goals in eight appearances.

The ex-Barcelona forward has netted four goals against Colombia, a haul he has bettered against only three other nations.

After failing to find the net against Venezuela, Everton talisman Richarlison scored against Peru, meaning he has netted in two of his last three Copa America outings.

Meanwhile, Liverpool striker Roberto Firmino registered a cameo appearance against the Peruvians after sitting out Brazil’s Group B curtain-raiser.

The 29-year-old, who has drawn a blank in his last four international matches, could return to the starting line-up against Colombia.

The Colombians have failed to build on a 1-0 win over Ecuador in their opening Copa America 2021 game, going winless in their subsequent two group stage matches (D1, L1).

Even though the highly-rated Atalanta duo Luis Muriel and Duvan Zapata headline the attack, Los Cafeteros have netted under 1.5 goals in all three Group B fixtures.

Aided by Juventus winger Juan Cuadrado, Zapata and Muriel will be looking to improve their paltry goalscoring return against the most formidable opposition at the tournament.

Reinaldo Rueda’s men will essentially focus on preventing Brazil from scoring, knowing each of their last 11 international triumphs yielded a clean sheet.

That will be easier said than done, considering Colombia have managed to shut Brazil out in just six of their 32 H2H meetings overall.

But Rueda will rely on Everton’s Yerry Mina and Tottenham’s Davinson Sanchez to cope with Tite’s all-star attack in Rio de Janeiro.

Mina will be particularly interested in excelling against his club teammate Richarlison after scoring an unfortunate own goal to give Peru a victory last time out.

Despite blowing hot and cold for Spurs last season, Sanchez has enjoyed a decent Copa America tournament so far, showing Daniel Levy he deserves another opportunity in London.

Brazil and Colombia last met in a goal-friendly 2-2 draw in an international friendly in September 2019, with Neymar and Casemiro cancelling out Muriel’s brace that time.

Since taking over the reins from Dunga in 2016, Brazil head coach Tite has avoided defeat in all four H2H meetings with Colombia (W2, D2), seeing his side take a first-half lead on three occasions in the process.

Going back to July 2003, all of Brazil’s 12 matches against Colombia have seen the teams separated by under 1.5 goals, with eight of them producing less than three goals.