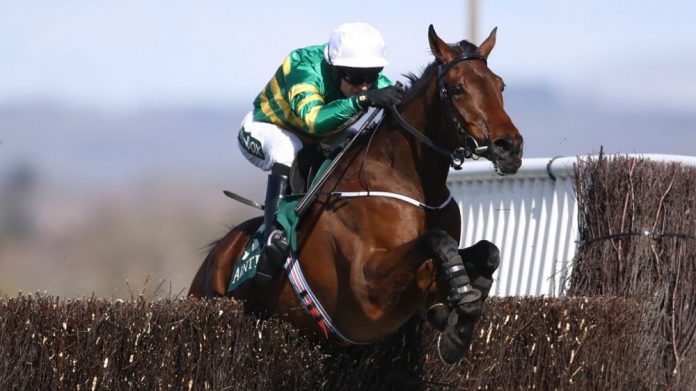 The 2m 5f Betfair Ascot Chase is the last Grade 1 before Cheltenham and feature race in the UK on Saturday, 19 February (3:38). With a roll of honour that includes Kauto Star and Cue Card, this year’s renewal is a cracker. There are eight runners declared, so – provided they all turn up – there is each way betting on offer. See who SportsLens experts like with their Betfair Ascot Chase tips and predictions below.

Looking for a flutter on the races? Claim the best online horse racing free bets from the best UK bookmakers.

But first, the stats and trends. Most recent Betfair Ascot Chase winners had an official rating in 160s. That only narrows the field by about half this time. We’re looking for a horse that last ran between a month and eight weeks beforehand too. Four of the last five victors were also previous course and distance winners, so looking at previous Ascot horse racing results is essential before betting.

Four of the last eight favourites justified their Betfair Ascot Chase odds but the three most recent renewals didn’t go to the market leader. In a competitive edition like this year, it would be no surprise if UK betting sites didn’t quite get it right again. Four of the past seven Befair Ascot Chase winners, meanwhile, were seven-year-olds. A couple run, so they are of obvious interest.

Another trend to note is horses coming on to Ascot from Kempton, either dropping back in trip after the King George or winning the race now called the Silviniaco Conti Chase there in January. That’s all the horse racing stats covered, so on with those Betfair Ascot Chase tips and predictions for a belter of a race.

Irish trainer Joseph O’Brien and leading owner JP McManus usually make for a potent combination. They combine with Fakir D’Oudairies, sending him over from the Emerald Isle, for a tilt at more Grade 1 glory. Always held in high regard by his powerful connections, this seven-year-old Kapgarde gelding has always shaped like intermediate trips suit him best.

Fakir D’Oudairies won the Drinmore Novice Chase aged four but then dropped back in trip. He was always strong at the finish in his 2m races, then chased home Allaho at last year’s Cheltenham Festival in the Ryanair Chase. Although Fakir D’Oudairies has been no match for that one in two subsequent tries against him, he did score at the highest level around Aintree last spring.

He looked as good as ever when easily accounting for Galway Plate hero Royal Rendezvous by 15 lengths in the Clonmel Oil Chase on reappearance in November too. Fakir D’Oudairies didn’t follow-up on that in the John Durkan at Punchestown, but had subsequent King George winner Tornado Flyer behind him. Off top rating of 164, he officially has 2lb and upwards in hand on the field.

This is the day for Fakir D’Oudairies, who still holds a Ryanair Chase entry and Cheltenham odds of 14/1. It’s hard to see him scoring at the Festival, so this as a target makes sense. That is why the bookies including go 11/4 about an Ascot Chase success. 888Sport have a special new customer offer with Fakir D’Oudairies at an enhanced 20/1 for the win.

Deposit min £/€10 using promo code 888ODDS • Bet up to £/€5 on your selection at normal odds in the regular market • If your selection wins, we’ll pay you out at the normal price and any extra winnings from the advertised enhanced price will be paid to you in Free Bets • Free Bets are granted within 72 hours and expire after 7 days • Restrictions apply to withdrawals, payment methods and countries & Full T&C’s apply

Plenty of others fancy their chances here. Paul Nicholls has four previous Betfair Ascot Chase wins as a trainer, including two since 2016. In Saint Calvados, he has the King George third dropping back in trip. Owned by Kate and Andrew Brooks, this nine-year-old Saint Des Saints gelding has talent but isn’t straightforward.

Saint Calvados ran a belter when runner-up to Min in the 2020 Ryanair Chase at Cheltenham. A Plus Tard, favourite in the Cheltenham Gold Cup odds, was behind in third that day. Subsequent King George hero Frodon was further back in fourth. The problem is that Saint Calvados hasn’t looked like winning since.

Both he and Venetia Williams’ Fanion D’Estruval are trading around 9/2 at the time of writing. This typical French import to the yard hasn’t proven himself outside of handicap company yet. These are deep waters for Fanion D’Estruval, a seven-year-old son of Enrique. A lofty 162 rating looks more down to the fine season the stable has enjoyed than his form. Both are passed over on horse racing betting sites for the above reasons.

Mister Fisher may be biggest danger

Nicky Henderson has three Betfair Ascot Chase winners on his CV as a trainer. Noting the above trend about Kempton success, Seven Barrows runner Mister Fisher could pose the biggest danger to the Irish raider here. Like Saint Calvados, things haven’t always been straightforward for this eight-year-old son of Jeremy.

Grade 2 is probably his level but the other principals beyond the favourite aren’t exactly proven in elite company either. At 6/1 with race sponsors Betfair, who have a bet £10 get £60 bet through the card Ascot betting offer, Mister Fisher rates a real danger.

New customer offer. Bet £10 on SBK on Race 1 at Ascot, Saturday 19th February. Get a £10 free bet for each of the remaining races on the card (£60 in total). Only deposits with Cards apply (Apple Pay deposits excluded). T&C apply.

Last year’s winner Dashel Drasher finds himself defending his crown in a much competitive race. Jeremy Scott’s stable star loves Ascot but is up against it. He also 16 lengths to find, albeit on 6lb better terms, on Lostintranslation. Colin Tizzard’s charge is another of the previous course and distance scorers after landing the 1965 Chase here in November.

Lostintranslation hasn’t had any luck whatsoever at Kempton in three cracks at the King George. Disregard that, however, and other bits of form look smart. This 10-year-old son of Flemensfirth was a fine third in the 2020 Gold Cup at Cheltenham, for example. Breathing has been an issue for Lostintranslation but his victory here on that penultimate outing means he could be overpriced.

A race like the Betfair Ascot Chase demands more, but Team Tizzard are in better form than last season. This looked an obvious target for Lostintranslation after the 165 Chase success, but that has been forgotten by the bookies. There is a standout 12/1 about him with Bet365, the same odds they put Eldorado Allen in at first show when he landed the Denman at Newbury last Saturday.