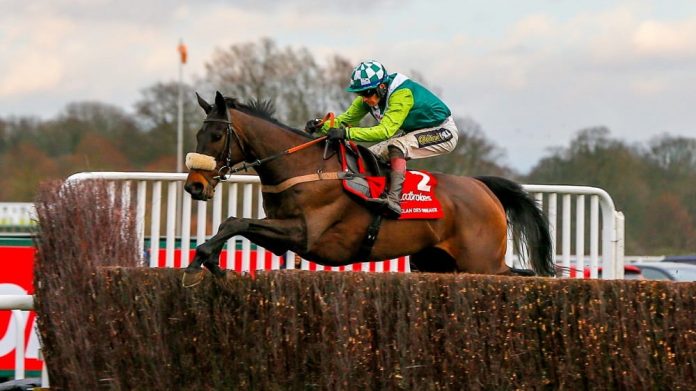 The chief supporting race on Super Saturday at Newbury is the extended 2m 7f Grade 2 Denman Chase (2:25). This contest, formerly the Aon Chase, is the last unofficial Gold Cup trial before Cheltenham in the UK. Clan Des Obeaux bids to go one better than last year but there are new challengers for him. Read our experts’ thoughts and Denman Chase tips right here.

In the six most recent renewals of this at Newbury, all winners of this had previous successes or placed horse racing results at the track. There is no substitute for Newbury form, then. Clan Des Obeaux’s victory came when the race moved to Ascot in 2019. That is something for our tipsters to consider when giving their Denman Chase tips on the race this time.

Six of the last 10 favourites obliged, so horse racing betting sites have a good record with the right market leader. The last five Denman Chase winners had an official rating of 162 or higher, meanwhile. Following that trend eliminates three of this year’s five declared runners.

There’s also an age profile that suggests horses between seven and nine have the best record. Only four winners have been older than that bracket since this race was first run in 2000. Another significant horse racing trend here is relative freshness. Six of the last seven Denman Chase winners turned up at Newbury off a break of six weeks or longer. Who do the experts fancy, though? Let’s find out.

Paul Nicholls has trained the winner of 10 of the 20 previous renewals of this race. It’s a phenomenal record for the Ditcheat maestro. On that basis alone, it’s no wonder that all the UK betting sites have Clan Des Obeaux in as favourite. Now aged 10, this son of Kapgarde failed in his bid to win a third consecutive King George at Kempton on his only start of the campaign.

Clan Des Obeaux has always come on for a run, but Nicholls felt he could complete the hat-trick first time out. He couldn’t, and that vindicated our experts who expressed concern about him on reappearance. The Denman Chase is a drop in grade for a horse who doesn’t feature among Cheltenham odds because Clan Des Obeaux doesn’t go for the Gold Cup.

This is a nice stepping stone en route to other end of season targets. The Betway Bowl during the Grand National Festival will no doubt be on Clan Des Obeaux’s agenda again. The fact he was beaten in this race 12 months ago by stable companion Secret Investor is a concern, however, alongside the poor form of the Nicholls stable.

Ditcheat haven’t sent out any runners throughout the week. All may not be well in the yard, then. On this occasion, Clan Des Obeaux looks opposable despite 888Sport going Evens about him winning a second Denman Chase here. His official rating of 172 puts him 6lb and upwards clear of the field but there are other factors in play here.

Leading the opposition to Clan Des Obeaux is the Haydock specialist Royale Pagaille. Newbury is left-handed too, so the in-form Venetia Williams team can feel confident. A dual winner of the Peter Marsh Chase in this grade, Royale Pagaille put in a second weight carrying performance to victory there last time out.

Owned by Rich and Susannah Ricci, this eight-year-old Blue Bresil gelding chased home A Plus Tard in the Betfair Chase before that. Those placing confirmed Cheltenham results from last year’s Gold Cup form, where Royale Pagaille came home sixth. The ground was sounder than he would’ve liked last spring, and it’s a similar story here.

On ratings and all known form, Royale Pagaille is the only horse capable of giving Clan Des Obeaux a race. Whether he can do that on going described as good to soft at the time of writing remains to be seen. In spite of that, Bet365 are 9/4 about Royale Pagaille belying the 6lb ratings gap and turning the favourite over.

One or other of the market principals really will have to underperform or not get round for there to be an upset. Imperial Aura’s jumping has really let him down and Kim Bailey’s stable is in no form at all, so the nine-year-old isn’t fancied in our Denman Chase tips. De Rasher Counter, meanwhile, hasn’t been on the track for almost 500 days. He will surely need the run.

However, one in the line-up who remains unexposed as a stayer and a possible each way angle is Eldorado Allen for Colin Tizzard. This eight-year-old Khalkevi gelding is out of the same mare Auvergnat, winner of the Paddy Power Chase and various banks races over 3m+ in Ireland. Stepping up in trip may just be what Eldorado Allen needs.

Team Tizzard also saddled Native River to three Denman Chase victories, so know what to do. While Eldorado Allen isn’t in the same bracket as his erstwhile superstar stablemate, who parades at Newbury on the day, he may have more to offer over a longer distance.

He looks overpriced on his breeding, so the standout 12/1 with Bet365 could be an each way alternative for punters concerned about Nicholls’ stable form and if Royale Pagaille handles the ground.