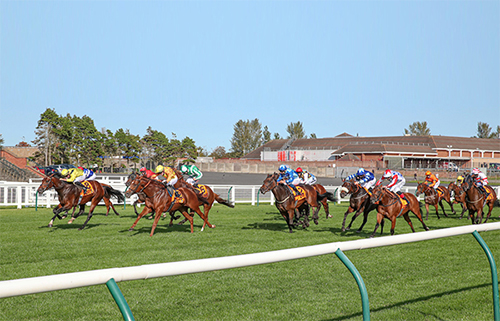 The Ayr Gold Cup Heritage Handicap is the big betting race in Britain this weekend. It’s also the feature contest of a three-day Flat meeting at Ayr this Saturday (3:40) where there’ll be a cavalry charge of sprinters at the 6f trip.

A full field of 25 Ayr Gold Cup runners take to the Scottish track in search of glory. This race has had everything in recent years, including a dead heat in 2018. There are also common trends that past Ayr Gold Cup winners bring to the table for those searching for the victor this time around.

Recent Ayr Gold Cup results reveal that all winners in the last five years had an official rating of 100 or higher. Since 2016, these have either been a class horse towards the top of the weights or improving types on marks of 100 or 101. It could also pay to concentrate on younger horses, those aged three or four.

Why Great Ambassador is favourite in the Ayr Gold Cup betting

Since leaving Ralph Beckett’s yard for the Ed Walker stable, Great Ambassador has won three of his five starts. That is clear evidence that this four-year-old Exceed And Excel gelding has progressed. Since his length third to re-opposing rival Commanche Falls in the Stewards’ Cup at Glorious Goodwood, Great Ambassador has scored twice and comes here seeking the hat-trick.

Victories at Newmarket and then when upped to Listed level in the Garrowby Stakes at York earned him a 10lb rise since Goodwood. That includes a 5lb penalty. Bookmakers clearly fear the thriving Great Ambassador, who ran on well in both successes. The concern is the increase in the weights from the handicapper may not be enough to stop him from going in again. On his York run, re-opposing duo Fivethousandtoone and Gulliver aren’t threats.

It’s easy to see why Great Ambassador is favourite in the Ayr Gold Cup betting here. He has improved for every outing in large fields throughout his career and arrives in Scotland at the top of his game. The booking of Richard Kingscote, who knows what it takes to win this race, shows connections mean business as he’s 2-2 on Great Ambassador. The horse is 5/1 favourite with Parimatch for more success.

Back Great Ambassador at Parimatch

Walker has another iron in the fire, though. That is three-year-old Popmaster, who has two wins in his last three outings. He is 2lb well-in despite a 5lb penalty here as the handicapper raised his official rating to 102. Popmaster runs off 100 and now gets the services of jockey Hollie Doyle for the first time. This improving type cannot be ignored, and that’s why he is also among Ayr Gold Cup tips this year with William Hill going a best-price 11/1.

Bet on Popmaster with William Hill

Another contender with a similar profile is Just Frank representing shrewd trainer Les Eyre. Another three-year-old gelding, this son of Epaulette struggled earlier in the campaign but has improved with racing. Just Frank bounced backed to the kind of form he posted as a juvenile on his last outing. That came at Thirsk where he made all for a facile success.

The Ayr Gold Cup demands plenty more, but Just Frank was most productive last autumn. This may be the time of year when he puts his best foot forward. Paul Mulrennan again takes the ride on the same day he’s aboard Euchen Glen in the Doonside Cup. With Just Frank 2lb well-in too, his claims of following-up at 11/1 with Boylesports are clear.

Back Just Frank with Boylesports

Way back in 1996, Coastal Bluff was the last horse to complete the Stewards’ Cup and Ayr Gold Cup double. The latest to attempt this rare feat is the aforementioned Commanche Falls for the Michael Dods yard. The four-year-old Lethal Force gelding won three times last season and has been campaigned even better by his handler this term.

Commanche Falls has four wins from six starts, including a course and distance success on reappearance. It’s not essential based on past Ayr Gold Cup winners but at least this horse acts at the track. That was off 84 yet Commanche Falls scored again off 90 and later 95 in the Scottish Stewards’ Cup at Hamilton. He followed-up on that at Glorious Goodwood off 6lb higher when keeping on strongly for a big race success.

If Commanche Falls wants that hat-trick, then he has a further 4lb hike from the handicapper to contend with. He meets Great Ambassador off 6lb better terms to confirm the Stewards’ Cup form, however, and has been kept fresh for this. Regular jockey Connor Beasley has a superb 50 per cent strike on Commanche Falls too. He may be overpriced at 10/1 with William Hill in relation to the favourite off these terms.

Back Commanche Falls with William Hill

King Power Racing have become significant owners on the Flat in Britain. They have three runners in the race but two of those vary in price in the Ayr Gold Cup betting depending on who you wager with. Stewards’ Cup sixth Bielsa meets both Great Ambassador and Commanche Falls off more favourable terms, so merits consideration. He ran ninth in this last season off 1lb higher than his current rating of 98.

Trainer Kevin Ryan has won the race three times in the last decade, so Bielsa represents a yard that targets Ayr Gold Cup success. Kevin Stott, the only jockey to win a race on him, is back aboard too. Parimatch go a top-price 16/1 about Bielsa but he’s as short as 11/1 in the early betting after final declarations elsewhere.

Sunday Sovereign, meanwhile, is as big as 25/1 with the same firm but 14/1 in places. Trained by Tim Easterby, this four-year-old Equiano gelding comes to the race off the back of a victory at Chester. Sunday Sovereign is up 3lb for that, but runner-up came out and won which advertised the form nicely. If building on that effort, he could also be in the mix.

Back Bielsa and Sunday Sovereign at Parimatch