Liverpool winger Ryan Kent impressed during his season-long loan at Rangers last term, scoring six goals and registering nine assists for Steven Gerrard’s side to emerge as the Scottish Premiership PFA Young Player of the Year.

The 22-year-old has returned to Anfield, but the Ibrox manager wants him back on another loan spell, and it appears a lot of the fans and players do too.

Rangers midfielder Andy Halliday is also keen for Kent to return, and he has made his wishes known in a reply to the club’s latest post on Instagram, commenting “announce Kent”.

? Rangers Hero? Favourite kit? Black pudding rating out of ten? Learn more about Andy Halliday as he answers your questions. 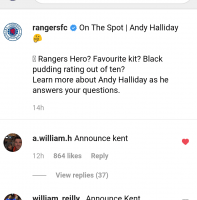 While Gerrard believes securing the services of the Premier League ace on loan once again is possible given his relationship with player and Liverpool, the Light Blues face a huge battle for his signature, with Leeds United and Aston Villa keen on a permanent move for the £12 million-rated winger.

The chance to play in the English top-flight or even at Elland Road could be too tempting for Kent to turn down, and the Reds might also be more interested in cashing in on their Academy graduate than loaning him to Rangers again.