A New Year brings about new hopes, new wishes, new resolutions. A time to recollect, make new plans and then try keeping to them. And since it is that time of the year again, I thought it will be fitting to write a post about my beloved club – AC Milan – and what the new year holds for them, and at the same time, piss the hell out of all Inter fans.

To begin, we must first look back at 2007. 2007 was a mixed year for them. Last season, they finished 4th in the Serie A (no thanks to Calciopoli), which, considering a club of their stature, is by no means a good result. This season, unfortunately, looks set to be even worse – they are currently languishing in 12th place and a massive 25 points behind, and it pains me much to say this… Inter.

However, they did manage to win the Champions League (their 7th) and also the European Super Cup and the Club World Cup. In the transfer market, they managed to sign Ronaldo and also secure for themselves, Alexandre Pato – one of the most highly rated teenagers at the moment. All things considered, depending on whether you see the glass as half full or empty, 2007 can be a good or bad year.

What then, 2008? Firstly, let’s talk about the Scudetto. It’s over. At this point, it is mission impossible for Milan, even with the 3 games they have in hand. Realistically, the Champions League and the Coppa Italia are the two remaining competitions they have any chance of winning.

Unfortunately, even that has is now being compromised. Drawing Arsenal in the Champions League, and the need to make up for a 1-2 home defeat against Catania in the Coppa Italia means that Milan won’t have an easy time.

Elsewhere, Milan have other problems. Their star striker Ronaldo is constantly injured and has played as many times as England have won the World Cup – one. Additionally, reports are rife that he is seeking a move away.

Another Milan player rumored to be on the move is the highly rated Gourcuff. The Frenchman has seen little playing time and is said to be looking for a club that would offer him the opportunity to play. However, the 21 year old who is widely tipped to be Zidane’s successor, has since reiterated his desire to stay and that should quell the fears of Rossoneri faithful worldwide, if only somewhat.

To add on, Milan have yet to address the problem of their rearguard, which is so ancient that I can smell it decomposing. With Maldini retiring at the year of this season and with Cafu and Favalli set to follow suit, Milan’s rearguard will be left dangerous thin.

And then there are talks of Ancelotti getting replaced with Mourinho, Lippi and Rijkaard named as possibly successors.

At this point, it is evident that Milan are a club in transition. The fearsome team that dominated football during the early parts of this decade is no longer what it used to be. I have said it before and I will say it again, changes need to be made and money to be spent.

Milan President Berlusconi, Italy’s richest man with a fortune estimated to be in the region of USD $11 billion, is no pauper. He has held back for far too long. Milan did not get to where it is by tightening its purse strings and going into the transfer market like an auntie in a Singapore wet market looking for discounts and bargains.

All that said, 2008, or at least until the end of this season, looks set to be as exciting as any Inter victory. Bah!

Inter fans, if you are still reading, boy have I got a treat for you. 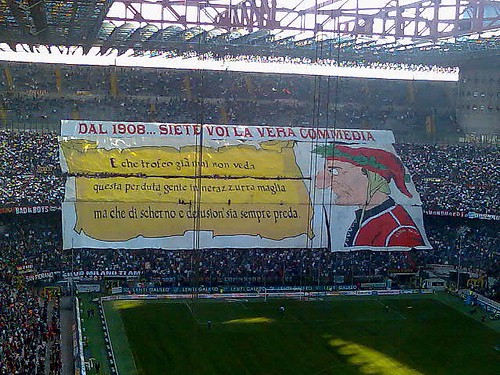 Inter, the true comedy since 1908.
Cheers and Happy New Year!