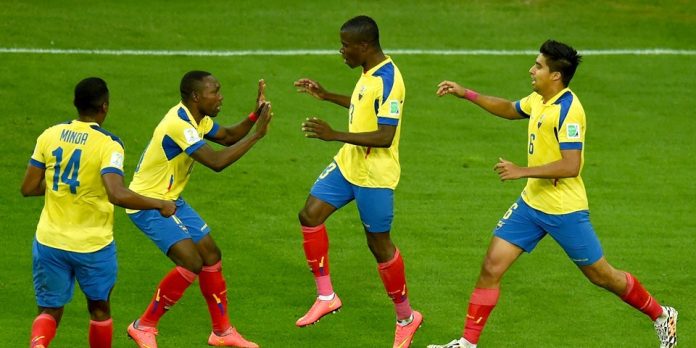 Central Americans, Honduras, faced off against South Americans, Ecuador, in Group E, following a seven goal thriller by their group-mates earlier today. Ecuador had the grit to come back from behind and keep their World Cup dream alive, largely thanks to the clinical precision of current top goalscorer, Enner Valencia. He rubs shoulders with world beaters Robin van Persie and Arjen Robben of the Netherlands, Thomas Muller of Germany and Group E rival, Karim Benzema of France on three goals so far.

How each team can still qualify

Despite sitting 3rd at present, Switzerland hold the upper hand to qualify alongside the French as they face Honduras, compared to Ecuador who come up against an on-song France.

France are already guaranteed a way through, be it 2nd or top, depending on their third game.

It will be thirty-two years tomorrow since Honduras last scored a World Cup finals goal, having failed to hit the net in South Africa in 2010 and not qualifying since 1982 prior to that. Carlo Costly, who plays in his home nation, ended his country’s dry-spell with the opening goal of the game. The 31-year-old forward wasn’t even born until a month after that goal against Northern Ireland at Espana ’82.

Costly got a little lucky from a long clearance, all the way from his own defense, being poorly dealt with by Guagua, and struck the ball sweetly past Dominguez.

The Hondurans were on the front foot and looking for their first ever World Cup finals victory, but unfortunately for the Central Americans, they couldn’t even hold on to their lead for 3 minutes.

The Manchester United man, Antonio Valencia’s team-mate and namesake, has been on fire in the warm up games and first 2 World Cup games and he didn’t stop his run today. Again capitalizing on poor play just in front of the penalty area, this time by Wigan’s Roger Espinoza, Peredes stole the ball and took a shot from distance. It was off-target as a shot but was excellent as a cross, which Enner Valencia watched carefully and put himself in the right place to slot it home.

On 65 minutes he sprung up again, to put his head on Walter Ayovi’s free-kick flown into the danger area. Ecuador stood strong for the final 25 minutes and sealed their first victory, lifting them to 2nd in the group until the final game on Wednesday.

Can Valencia add to his goals against France, giving Van Persie et al a run for their money, or is time up on his tally in Brazil?