FIFA have rejected speculation that they have distributed a 20-word ‘swear list’ amongst all of the officials that will officially officiate at the World Cup.

The news comes after Carlos Simon, the shameless bastard that is set to take charge of England’s opening game against the USA on Saturday, revealed that he and his assistants (Altemir Hausmann and Roberto Braatz) have been studying a list of English profanities to help them efficiently discipline players who fall foul of  ‘abusive language’ guidelines;

“We have to learn what kind of words the players say. All players swear and we know we will hear a few. Of course we can’t do this in 11 different languages but at least we have to know the swear words in English.”

However, FIFA have rubbished claims that the Brazilian trio were following an initiative issued by football’s governing body;

“No such list has been distributed to the referees. Some nosey t*sser’s just pulling your f**king plums mate.”

…or something to that effect. 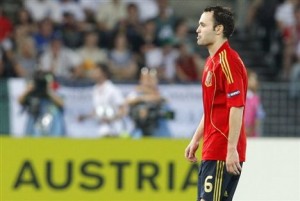 Scans have revealed that Spain string-puller Andres Iniesta suffered a ‘minor thigh injury’ during La Furia Roja‘s recently 6-0 friendly demolition of Poland. The Barcelona man was taken off in the 39th minute of the pre-World Cup warm-up game, primarily as a precautionary measure.

However, according to national team doctor Oscar Celada, Spain may now face an anxious wait on the fitness of their influential midfielder;

“As [Iniesta] wasn’t comfortable, we made the change – it’s a minor muscle injury. We will calmly carry out tests, but we can initially rule out any muscle tear. It’s a minor injury, but we have to take precautions.”

There was some positive news on the injury front for Spain as Liverpool striker Fernando Torres scored on his comeback from injury – guiding Pedro‘s pinpoint pass home in the 76th minute.

Here are the highlights of the game (Spain’s second goal is a ‘must see’ – ’tis truly a thing of beauty!).

‘NEVER lose a training game when El Diego‘s around, unless you want to be removing Jabulani’s from your colon for the next few days!’ 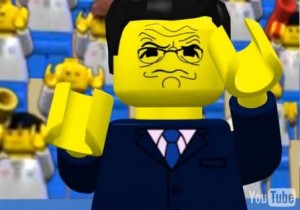 Looks like Fabio Capello and co. may be suffering from a spot of jaundice. 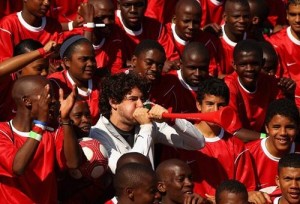 AC Milan starlet Alexandre Pato was a surprise omission from the Brazilian World Cup squad but it would appear that yet another injury-ravaged season at the Rossoneri proved to be the 20-year-old striker’s downfall.

However, The Duck isn’t letting the fact that he won’t be featuring for the Selecao at the World Cup this summer get him down, far from it in fact, as he has revealed that he intend to follow Dunga‘s side around South Africa like a vuvuzela-wielding Mark Chapman;

It’s almost the same team that played at the Confederations Cup and they know what they have to do to win.”

“Q: Does it ever get windy in South Africa ? I have never seen it rain on TV, so how do the plants grow?

A: We import all plants fully grown and then just sit around watching them die.”

From the Q&A section on the South African World Cup tourism website.

Dutch physio Dick van Toorn believes Arjen Robben will be fit for Holland’s opening World Cup game against Denmark on Monday, but that Oranje coach Bert van Marwijk may leave him out regardless, due to the fact that the Bayern Munich winger has missed too many training sessions. (Goal)

Legendary Chilean striker Ivan Zamorano has backed Italy to win the World Cup, as the former Inter Milan hitman thinks the Azzurri have the ‘right mix of experience and youth’ to lift the trophy. (Sky Sports Italia)

Fancy winning yourself £1600? Then why not give the Soccerlens World Cup Fantasy Football Challenge a try then? You’d be a numpty not to!