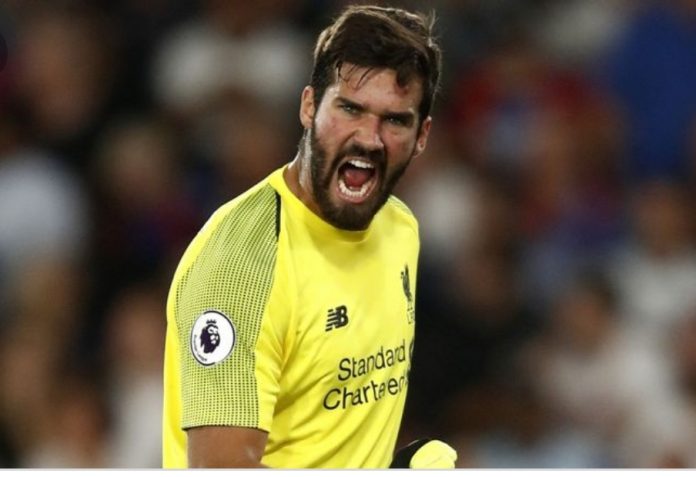 Liverpool may have since top spot in the Premier League taken from them last night, but Reds stopper Alisson Becker is still confident the title will be Merseyside bound at the end of the season.

The Brazilian has played a huge part in The Reds title tilt, as Liverpool aim to win the league title for the first time in 29-years.

Alisson arrived at Anfield from Roma last summer. A £56m fee made him the world’s most expensive goalkeeper until Chelsea signed Kepa Arrizabalaga at the end of the window.

During his first season at The Reds number one, Alisson has conceded only 15-goals in the Premier League, keeping an impressive 13-cleansheets.

The Brazilian is defiant about Liverpool’s chances of clinching the title. Recent form has seen The Reds surrender a 7-point lead following draws with Leicester City and West Ham United.

Speaking to Sky Sports, Alisson has played down the pressure Jurgen Klopp’s men are feeling. The Brazilian said:

“We believe we can win the league. We’ve shown in the past that we’re good enough and we’ll continue to show this in the games we’ve got to come”.

The Brazil international has claimed Liverpool focus on themselves without worrying what their title rivals are doing.

“Our pressure is the same. We take things game by game without worrying about what our opponents are doing. We don’t think about Man City, we think about ourselves. We only think about what we can do and how things are moving forward”.

Alisson knows exactly what he wants to achieve this season and how to realise those aspirations.  He added:

“I really want to win the Premier League with Liverpool. We need to win games and we need to focus on our next opponent”.

Liverpool’s next opponents are Bournemouth on Saturday. The Brazilian feels The Reds need to work hard and that begins with The Cherries visit to Anfield.

“To get back to the top of the league we need to win games that comes from hard work, starting on Saturday”.