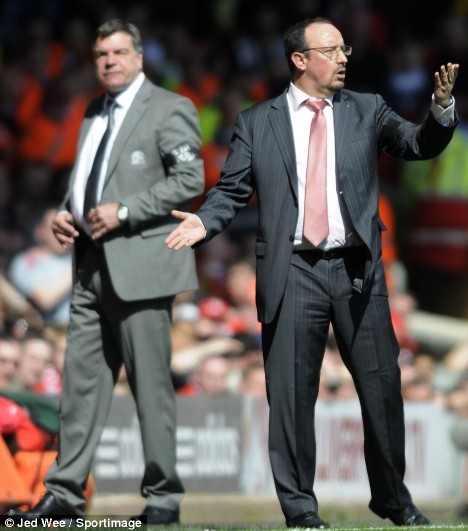 Newcastle United suffered their heaviest loss in a game since October 2015 at the hands of Leicester City on Sunday evening.

The Foxes put five goals past 10-man Magpies, and the manner of the defeat heaps more pressure on head coach Steve Bruce.

While the Magpies had only picked up two points under the Spaniard after seven Premier League games last term, they never shipped five times in a game while he was in the dugout, last suffering defeat by such a deficit in a 6-1 shellacking at the hands of Manchester City under Steve McClaren.

Nevertheless, former Newcastle boss Sam Allardyce has leapt to Bruce’s defence, and he can’t understand why he has gotten so much fierce and harsh criticisms since taking over when Benitez didn’t get any.

“To blame Steve Bruce just yet is a long way off, he’s only just arrived and I don’t think the problems just lie in the team’s performances as they did go down to ten-men to a tackle that would have been perfectly legal in our days,” the one-time Three Lions boss told talkSPORT.

“In the end, it’s how Newcastle capitulated when down to 10 men. It’s very difficult but they should have put up a better defensive performance, the 10 men should have just sat in there and play the rest of the game out.

“Unfortunately for Steve particularly, it’s gonna be a tough one up to maybe Christmas, but we got to look at the situation, and say he’s got more points than Rafa got last year at this moment in time, but I still don’t know why Steve is getting some stick, Rafa didn’t get any stick, but Steve is, I just don’t understand it, but there we go.”

"To blame Steve Bruce yet is a long way off."

"He's got more points than Rafa got last year." 👀

Sam Allardyce on #NUFC under Steve Bruce. Agree with this Newcastle fans? pic.twitter.com/5Y27go3bN3

Bruce’s past affiliation with bitter rivals Sunderland isn’t doing him any good, and the fact that he was deemed good enough to succeed Benitez didn’t go down well with the Newcastle fans.

The win against Tottenham – the club’s first against Spurs since they returned from the Championship – wasn’t enough to convince many, and last weekend’s unimpressive draw at home against Brighton and Hove Albion, coupled with the Leicester embarrassment has made things worse.

Newcastle face Manchester United and Chelsea next, and it will be interesting to see how they respond after Sunday’s disappointment.