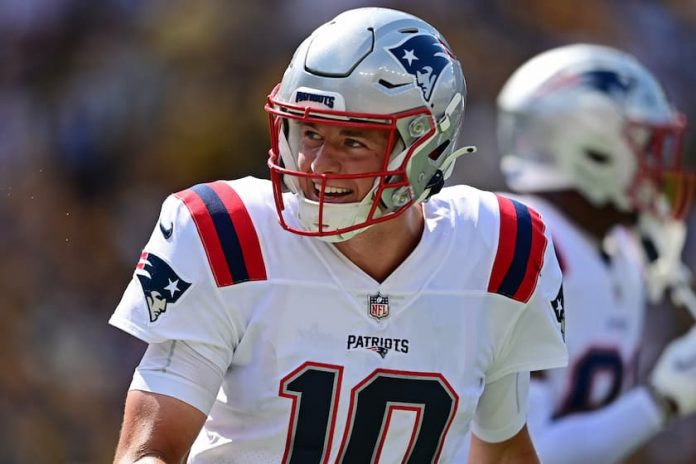 Mac Jones is only in his second year of NFL and is already under scrutiny about whether he is the way forward for the patriots. Former Patriots linebacker Rob Ninkovich has shared his take on the young QB.

Ninkovich has come to Mac Jones defense following a shaky start to the season for both him personally and the patriots as a team.

After a promising rookie campaign Mac Jones had high hopes coming into the NFL being the number 1 draft pick by the patriots. However, Jones has faced an uncommon number of changes for a young player.

In his first year at the Patriots, he had to create a new partnership with head coach at the time Josh McDaniels. The bond and partnership they created was clear to see and it was incredibly successful.

Then moving into his second year Bill Belichick has come in as head coach also implementing a new offensive system which has provided more challenges than Mac Jones may be able to handle.

Patriots safety Devin McCourtey has publicly announced his and the team’s confidence in the young QB to hit back at his critics.

"He would be crazy if he built his career off of what people write and say about him."

Devin McCourty talks about Mac Jones and the confidence this #Patriots team has in him as a QB, and a captain 🗣️ pic.twitter.com/7fhio3fVqz

Within the first two weeks of the NFL season Jones has thrown for 465 yards and two touchdowns with two interceptions and the Patriots offense has only totaled 24 points. It is only Week 3 but Jones is already facing criticism, however Rob Ninkovich doesn’t believe it’s time to panic just yet.

In a recent podcast he said: “I do believe he is still the guy. I’m kind of taking everything that I’m watching with a grain of salt considering I don’t know if they necessarily put him in a great position this offseason.

“You have to understand, when you go from Josh McDaniels to a new staff or a new style, you have Matty P (Matt Patricia), Joe Judge, Bill Belichick, those three guys are probably making the rounds trying to implement an offensive system that’s different.

Ninkovich went on to assure fans to be confident in their quarterback: “You have Mac Jones, a capable, smart quarterback who can put your team in the position to win football games.

“Would I like to see a little more zip on the throws? Sure, why not. But at the same time, I still like what I see and the way he carries himself.”

Mac Jones and the Patriots face the Ravens this coming Sunday and the young quarterback will be hoping to string some touchdowns together to take some weight off his shoulders.