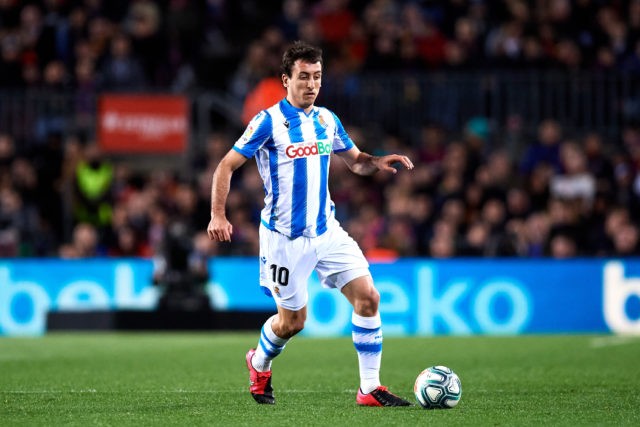 According to talkSPORT, West Ham United are keen on signing Real Sociedad forward Mikel Oyarzabal before the end of the January transfer window as they look to land a replacement for Sebastien Haller.

Manager David Moyes has Michail Antonio as his only striker following the departure of the Ivory Coast international, and he wants to bolster his attacking options in order to finish the campaign on an impressive note following his side’s brilliant start.

The Hammers boss knows Oyarzabal from his days at the La Liga outfit and is now eyeing a potential reunion at the London Stadium.

The 23-year-old has 50 league goals for the Spanish side in 183 appearances, and he also has experience playing in the Europa League.

West Ham will be looking to finish in the top-seven in order to play in Europe next term, and having a player like Oyarzabal would come in handy.

The Spanish international plays across the frontline and behind a striker, and such versatility and experience would do the Hammers a lot of good.

The Sociedad star also has 30 La Liga assists to his name and is the type of provider and creator any club would crave.

Landing Oyarzabal half-way through the season would be a very difficult task for West Ham, though, as Sociedad cannot afford to let such an important player leave at the moment.

They are looking to play Champions League football next season, and they will need his goals and assists during the second half of the season to have a realistic chance of finishing in the top-four and qualifying for Europe’s elite competition.

The Hammers have had an offer for Sevilla striker Youssef En-Nesyri rejected and have also spoken to Reims about Boulaye Dia, while Josh King’s wages demands are too excessive, and it will be interesting to see whether they prise Oyarzabal away from Spain.