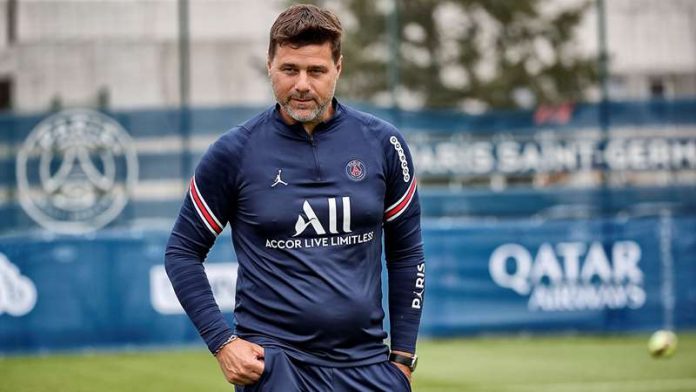 Mauricio Pochettino could be a dark horse to replace Gareth Southgate as next England manager if the Three Lions’ World Cup campaign in Qatar turns out to be a damp squib.

Paris St-Germain have confirmed the departure of head coach Pochettino after 18 months in charge, despite guiding them to a record-equalling 10th French title, his first league success as a manager.

Former Nice manager Christophe Galtier is expected to replace the Argentine, who has been admired by some of the top clubs in European football in recent years.

Where next for Poch? 🤔 pic.twitter.com/Cyq78Swrjj

Manchester United and Real Madrid were both strongly linked with Poch after he was sacked by Tottenham less than a year after leading to the Champions League final that they lost to Liverpool.

Southgate is gearing up to lead England’s bid to win the nation’s second ever World Cup in November but is coming in for criticism over his pragmatic tactics.

Although he has a contract until 2024, should the campaign end prematurely it is not inconceivable that the FA could pull the trigger and target Pochettino as his replacement.

Bookmakers Paddy Power are offering odds of 10/1 on the former Southampton boss taking the reigns as next England manager which looks a tempting price after England’s last result, a 4-0 hammering at the hands of Hungary.

But at this stage it seems much more likely that Pochettino could be handed the hot seat at Real Madrid where he would replace veteran Carlo Ancelotti.

In fact Paddy Power have priced up Poch to take charge at the Bernabeu at just 6/4, meaning that a £20 bet would return £50 including your initial stake.

French football expert Julien Laurens believes Pochettino could replace Ancelotti, telling talkSPORT: “I think he wants to come back to England, his wife and two boys are here of course.

“I think the natural thing is for him to come back to the Premier League which is the league that I think he prefers anyway even more than La Liga.

“I am just not sure right now that there is a job, or very soon a job that he would like because if you look at all the top six, they are all taken now.

“Will he go below the top six? I think he is a top-six manager easily in the Premier League. I think Carlo Ancelotti will have another season at Real Madrid and then they can give it to Poch.”

Elsewhere, Chelsea boss Thomas Tuchel is not convinced that signing Cristiano Ronaldo would be a good idea.